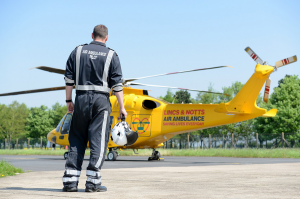 Award-winning software specialist OrderWise has announced the Lincs & Notts Air Ambulance as its chosen charity of the year for 2019.

The Lincs & Notts Air Ambulance is one of the UK’s leading Helicopter Emergency Medical Service (HEMS) charities and is funded entirely from public donations.

David Hallam, Managing Director at OrderWise, said: “We’re delighted to be supporting the Lincs & Notts Air Ambulance as our charity of the year!

“We like to give back to the community whenever we can, and over the years we have supported employees with the promotion and fundraising of several events including Pretty Muddy Race for Life and the London Marathon.

“We’ve also held charity quizzes and bake sales to raise funds for national awareness issues throughout the year, including Movember and the World’s Biggest Coffee Morning in aid of Macmillan, while also supporting several other local Lincolnshire-based charities.”

OrderWise will be raising money throughout the year to help fund the vital pre-hospital and critical care that the air ambulance provides across Lincolnshire and Nottinghamshire.

Tanya Taylor, Corporate Development Fundraiser at the Lincs & Notts Air Ambulance, said: “We’re thrilled that OrderWise have chosen us as their charity partner for 2019, which is a huge year for us as we are celebrating our 25th birthday! 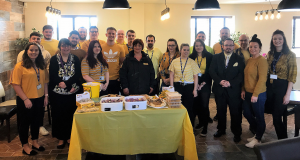 “As a charity we receive no direct Government funding and we’re not part of the NHS, therefore we rely solely on generous donations from the public. OrderWise’s fundraising efforts will go a long way towards helping those in their greatest hour of need while aiding the best chances of survival and recovery – and for that we are incredibly grateful

The company kicked off its fundraising earlier this week with an official launch event, held at its purpose-built staff café, the Hive. Employees wore yellow for the day, participated in an internal table tennis league, played bingo and sold cakes and treats in a bake sale, raising over £200.

In a bid to maximise their efforts, 18 employees from OrderWise have already signed up to The Yorkshire Three Peaks Challenge on 8th June. The route is 24 miles long and includes a 1585m ascent, taking on the peaks of Pen-y-ghent, Whernside and Ingleborough, to be completed in that order and in under 12 hours.

To keep up to date with the OrderWise team’s progress or to donate you can visit their fundraising page here:https://www.justgiving.com/teams/OrderWise-Three-Peaks-Challenge.