Top Posts
The BDI drops down to 1,540; Wets maintain...
John Faraclas of All About Shipping contributes to...
Irene Rosberg addresses the 22nd Parliamentary Intelligence-Security Forum
Pamella Roland Fall/Winter 2022: Bejeweled Eveningwear
Summer is on in Astypalea!
Hot Port News from GAC
Bibhu Mohapatra Fall/Winter 2022: On the Super Heroines...
Ready to hit the water? So are these...
Coach Fall/Winter 2022: A Collection That Feels Like...
Badgley Mischka Fall/Winter 2022: Wearable Sculpture in Ultra-Chic...
Power, philosophy and heroism of central bankers, and...
New superyacht goes up in flames
American Club Circular no.23/22 – EU Sanctions –...
Home HRAwards Award for latest generation CCS at Marseille Fos 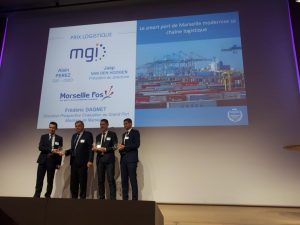 From the awards ceremony

The award, from French magazine Solutions Numeriques, was presented in Paris and follows the Gold IT Award for the Ci5 concept and Neptune Port – the Marseille Fos logistics synchronisation system – announced at the International Association of Ports & Harbors 2017 conference in Indonesia.

Implemented at the port last October, Ci5 currently has 4,600 users across 15 professions who have been the first to deploy the solution ahead of its planned worldwide roll-out.

MGI president Jaap van den Hoogen commented: “We are honoured to receive this testament to the success of Ci5.  Its innovative technology is helping to transform ports into smart ports.  The launch at Marseille Fos is the culmination of collaboration between our partner Thale Services, the system’s users and MGI experts – a shared vision that is driving port clients into a more connected, streamlined and secure era.”

As recommended by development partner Thale, the system is based on open source technologies and service-orientated architecture enabling innovations like big data, the Internet of Things, smart containers and artificial intelligence.  With input from users, the solution was designed according to the Agile Method to support fast development and deployment.

By speeding goods transit times, Ci5 is improving the port community’s competitiveness and has positioned MGI as a leading player in French Smart Port in Med, a joint initiative launched by the Marseille Fos port authority, the Marseille Provence chamber of commerce and Aix Marseille University to enhance the port’s economic, environmental and digital performance.  Project activities range from research & training to smart port digital demonstrations and investments in smart infrastructure.

Petro-chemicals specialist Philippe Zichert has been named as the new chairman of Via Marseille Fos (VMF), the promotional body formed by the port authority, the chamber of commerce and members of the maritime/waterways operators’ federation the UMF.

He succeeds Stephan Snijders, who is retiring after 42 years in the maritime industry.  During his final board meeting, Mr Snijders was commended for his leading role in widening VMF’s reach to include the economic attractiveness of the port for industrial implantations.

Mr Zichert, 50, has been administration and finance director of Ceresine – a producer of wax ingredients for the cosmetics industry – since 2003.  The company has imported and exported through Marseille Fos since 1926.

Mr Zichert became a VMF board member in 2017 and an elected member of the Marseille Provence chamber of commerce in 2016.  In taking up the VMF chair, he pledged to continue promoting the port’s diversity both as an industrial base and as an alternative Mediterranean gateway for goods to and from Europe via the multimodal Rhone-Saone axis.