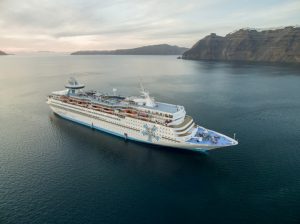 The biennial Posidonia Sea Tourism Forum has established itself as one of the most influential events for the international cruise industry, thanks to the strategic role of the Eastern Mediterranean and Black Sea regions in terms of destination diversification, passenger demand and fleet deployment considerations.

This year’s event, to be held from May 28-29 at the Domotel Kastri Conference Center, in Athens’ northern suburbs, will host over 30 highly influential senior cruise executives responsible for ports and destinations from the world’s biggest cruise lines, including MSC Cruises, Royal Caribbean Cruises, Holland America Group, Disney Cruise Line, Silversea Cruises, Fred Olsen Cruise Lines and Celestyal Cruises among others.

Many of them will also participate at a meeting of the Cruise Lines International Association (CLIA) European Ports and Destinations Advisory Committee, to be held at the Posidonia Sea Tourism Forum for the first time and engage with the region’s destination representatives on the exhibition floor and the event’s many networking opportunities.

Elisabetta De Nardo, VP Port Development, MSC Cruises and Chairman of CLIA’s European Port & Destination Advisory Committee, said: “Greece continues to be a region of great importance for the international cruise industry. In recent years, following geopolitical instability in other areas across the Mediterranean Sea, Greece has assumed an even more prominent role in Eastern Med cruise itineraries. The Posidonia Sea Tourism Forum is the top cruise event in this wonderful and strategic region that is the Eastern Med. I look forward to discussing the challenges and opportunities that we face with other stakeholders.”

Some of these opportunities include the impending legislation that kicks-off the 2nd phase of the Greek ports privatisation process, effectively allowing global cruise port operators to invest in cruise terminal concessions across the country, a much-awaited move likely to increase homeporting. These developments have also attracted the interest of leading cruise terminal operators, such as Global Ports, who will be present in Athens at the event.

As of May, the first in line port privatisations are Alexandroupoli and Kavala. The list also includes top cruise destinations Corfu and Heraklion, both of which have confirmed their participation as PSTF 2019 exhibitors, together with Piraeus and Rhodes. Their participation at the Forum will enable them to meet with members of the CLIA Ports and Destinations Advisory Committee and other stakeholders.

Having just received the prestigious Best Destination – Leisure award at the recent ITB exhibition in Berlin, Greece is the destination of choice for 35 million tourists annually, mainly thanks to its climate and two idyllic island archipelagos, an iconic operational theatre for the world’s biggest cruise lines.

An increasing number of arrivals comes from the US; according to Athens International Airport data, the number of American arrivals has increased over 113% during the last five years with many travelling to the country for its varied cruise product options.

In response, the major US cruise lines have increased their 2019 Greek ports of call, and other niche players such as Disney Cruises, are resuming operations in the country as early as next year. Their itineraries include the ports of Piraeus and Katakolon, near ancient Olympia. Also, the islands of Santorini, Mykonos and Crete have been announced as ports of call for the company’s 12-night and 9-night cruises next summer, following a five-year absence from the market. Disney has confirmed its participation at the Posidonia Forum and plans to meet with destinations as preparations for its return to the region have started.

Buoyed by stronger tourist arrivals from North America, the renewed long-term commitment of US cruise operators to Greece is matched by a traditionally strong and fast-growing presence of European counterparts. MSC Cruises has some 400 calls in Greek port destinations in 2019, making this its busiest year for Greece. Many cruise lines are taking advantage of the popularity of Santorini and Mykonos, with the latter also securing many overnight calls for this summer season. 2020 will also see a return of a number of cruise lines to Turkey’s western coastline, as well as to Istanbul.

This year will also see the largest number of small cruise ships with a capacity of under 500 passengers cruising in East Med. This new trend of cruising on small luxury or expedition vessels is especially important for the smaller island or mainland ports that do not have the infrastructure or technical characteristics required for the larger vessels thus opening many more destinations to cruising.

Airam Diaz Pastor, president of the Association of Mediterranean Cruise Ports (MedCruise), said: “Ports, terminals and destinations from the East Med, Black Sea and Red Sea are experiencing an increase in cruise passengers and calls and cruise lines are confirming their itineraries for 2020 and 2021 in the region. Moreover, both turnaround and transit calls are coming back to Turkey, which will have a positive impact in the whole region.”

“We believe that the recovery of the cruise business in these regions will have a positive impact on the surrounding areas. It means that Greece, located at the centre of the East Med, will benefit from the growth in cruise activities in North Africa and Black Sea as well as in the Adriatic,” added Airam Diaz Pastor.

The 5th Posidonia Sea Tourism Forum is organised under the auspices of the Ministry of Tourism and the Ministry of Maritime Affairs & Insular Policy and is supported by the Hellenic Chamber of Shipping, the Association of Mediterranean Cruise Ports (MEDCRUISE), the Hellenic Professional Yacht Owners Association, the Greek Marinas Association, the Association of Passenger Shipping Companies, the Union of Cruise Ship Owners & Associated Members, the Federation of Hellenic Associations of Tourist and Travel Agencies (fedHATTA). Silver sponsors are the Piraeus Port Authority and HEMEXPO and Bronze Sponsors are Air France – KLM – Delta, Aktina Travel Group, Global Ports Holding and Celestyal Cruises.