The BDI lost earlier on today only 14 points thanks to all the other dry indices’ performance and in particular that of the Panamaxes who managed to clinch 47 points and go over and above the 1,000 points threshold; Geopolitics in turmoil. John Faraclas’ daily recap and latest news from Panama:

The Capes’ BCI lost 111 points – an alarming three-digit figure and now reads 288. Ultra-caution should be observed!

The Panamaxes up with the BPI at 1,009 points – plus 47; well done as it managed to keep the BDI’s losses down…

Three points plus for the Handies’ BHSI now at 449…

Expect further fall  as Capes are more than vulnerable….. CAUTION…

Once again the Wets with mixed feelings; the last published BDTI (Dirties) and BCTI (Cleans) stood at 705 – minus ten and 634 – plus seven points respectively…

The Geopolitics with the BREXIT saga producing more twists and turns will for sure make the World go round. CAUTION. All other main issues, unfortunately, remain the same… We will revert tomorrow Friday – being also the end of the week, with a full run down of the main Geopolitical issues. 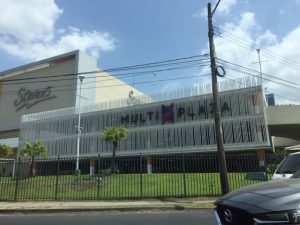 This is the last day in Panama and our team managed to visit in the morning one of the country’s and America’s best shopping malls to verify the state of the consumer markets – consumer goods etc., etc., at the Multi Plaza and talk to people too. We had already visited twice the Megapolis Shopping Centre as well as the old town district with the presidential Palace, the Bolivar palace, the old market with shops, the Museum of the Panama Canal and other places of interest including great squares. As we emanate from Greece we also visited the Greek Orthodox Cathedral – there is a big and thriving Greek community in Panama and proportionally one of the biggest in the world! Criss-crossing the city with our local friends and other speakers and delegates was a great experience spend some time in exceptional nice local restaurants and bars to see the real life in Panama and “calculate” as well as verify the current situation. Add the trip to the old Panama Canal at Miraflores Locks for an exceptional as well as memorable evening reception and at the expanded Canal Locks – the  new Panama Canal Locks as we call them.   Panama City celebrates also this year its 500th anniversary!  On the occasion of this unique anniversary, Panama was declared Ibero-American Capital of Culture! Wish we were back for the finale on the 15th of  August and watch the fireworks’ show. What a milestone! A few days ago the Pope of Rome visited the City of Panama leaving the faithful, from what we gathered, in excitement! The Pontifex was there between the 22 to 27th of January to celebrate World Youth Day with young people from across the world.

A two hours aller-retour drive… from 09:00 to 17:00 hours witnessing what goes on in the country-side too and seeing the major woks under way as well as new residential and business areas – a great investment working both ways for the locals and foreigners who opted to live and work and reside as pensioners in Panama.  The country is heading for a general election on the 5th of May with more than five main parties being involved!

Panama as we saw over the eight days of our stay is a big construction site and that’s fine; the works though MUST finish the soonest possible so that the public enjoys the infrastructure – roads, bridges, housing,  metro, schools, health care, transport means too. There is still a lot to be done and basically ensure poverty comes to an end as we noticed that some sectors of the population face real issues. 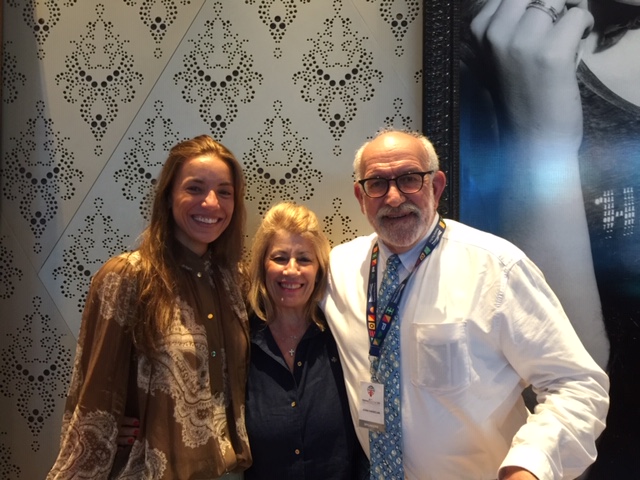 We were fortunate enough to meet an old friend of ours, Ana Irene Delgado, former Panamanian Ambassador in London, United Kingdom, Norway, Ireland and Iceland; Panama Permanent Representative to the International Maritime Organization and solicitor –  Partner SOLENDEG Panama London Office, who now runs for the Senate in Panama with her father Hernan Delgado. She managed to come to our hotel amid her election campaign for a quick after lunch drink but as the traffic was chock-a-block and we had to go to the airport.  After exchanging views on the situation in Panama, she gave us a lift to the airport, had a long discussion about the course of her party, the Cambio Democratico as well as the current situation and the need of change she believes that must take place. 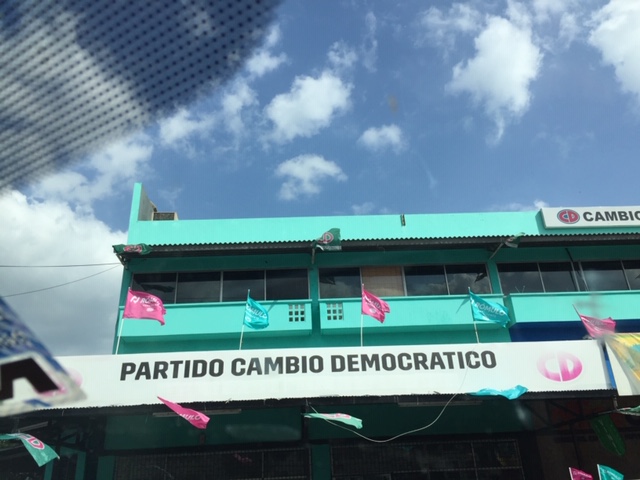 You never have this chance and luck with politicians on the move. Ana Irene Delgado is a very discipline young lady and we sincerely hope she has a lot to offer to her country and to her country’s women – see relevant survey on the International Women’s Day and judge for yourself.

You rarely also have a quick glimpse of political parties HQ’s – particular when you are heading to catch your flight, but thanks to her we did! She has responded to our surveys and reports in the past wherever we have asked her including sports and the Davos summit. Finding time for all is a charisma and Ana Irene possess these charismas. Ana Irene is a keen fencer and equestrian, and represented Panama in fencing  in the Bolivarian Games, Fencing World Cups and the Central American and Caribbean Games. In the UK during her tenure as Ambassador she continued to  train at the Lansdowne Club with members of the British Olympic team. 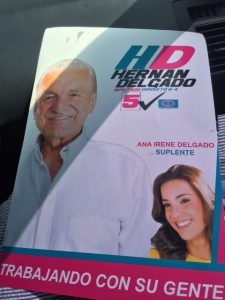 We wish her best! We also wish her to become one day her country’s president!

We managed to make it on time to Tocumen airport as all the way there were road works; in the airport area too – hope next time round all works will be finished. The airport looks likely to become one of the best in the Americas and hopefully as we intent to assist and consult Panama in becoming a big hub for the Cruise Industry and Maritime Tourism to all intents and purposes, major airports to serve thousands of passengers joining mega cruise ships  is a must!

Good bye Panama! All in all a great experience, an excellent Panama Maritime Conference and Exhibition and very hospitable as well as friendly people! Above all meeting old friends and making new ones was the epitome of our trip!

Wishing you all a nice evening and remain on guard from actions emanating from Pirates, Terrorists, Criminals and Business Hooligans whatsoever wherever you are on Planet Ocean.