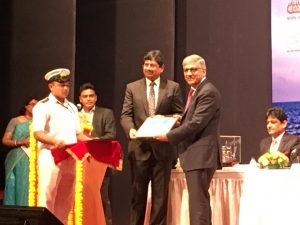 The Eminent Overseas Maritime Personality Award recognises and honours individuals for their sustained and outstanding contribution to the maritime sector.

Paul Jennings, CEO of North P&I Club, Chairman of the International Group of P&I Clubs, and Guest of Honour at the National Maritime Day Celebrations, commented, “I’ve had the pleasure of knowing Savraj for nearly 25 years, and throughout that time he’s consistently demonstrated outstanding strategic vision and a commitment to excellence in every aspect of his work. This award is a testament to his character, work ethic, and dedication.”

In India, National Maritime Day is celebrated every year on 5 April, but this year was doubly special because it also marked the centenary of the SS Loyalty’s journey to the United Kingdom. The ship was the first to be owned entirely by Indians and is widely regarded as a crucial first step in India’s maritime history and journey to independence from the United Kingdom.

Captain Savraj Mehta, commented, “It gives me great pride to accept this award from the National Maritime Day Celebrations Committee. I would like to take this opportunity to thank my family, friends and colleagues at North P&I Club for the support and assistance they’ve given me over the years.”

Captain Mehta continued, “This year’s theme is ‘Indian Ocean – An Ocean Of Opportunity’, and I believe this perfectly captures India’s position in the world. It is one of the world’s largest trading nations, and one which in which seafarer employment leapt more than 35% in 2018 to over 200,000. There is huge global demand for Indian skills, and, as a country with more than 7,500 km of coastline, enormous opportunity for India as a maritime nation.”

Captain Mehta joined North in 1995 and today has overall responsibility for the Underwriting Department. He is also a member of the leadership team in his capacity as Chief Underwriting Officer, working closely with North’s Board of Directors to develop strategy for the Group with North’s CEO. Prior to joining the Club, he spent twelve years at sea, sailing as Master for four years, before coming ashore to work with shipowners as Marine Superintendent and Operations Manager. Captain Mehta is a Fellow of Institute of Chartered Ship Brokers, Nautical Institute, and Company of Master Mariners.

Bridging the Decade of Defense hosted by Bahamas...