All Dry indices were down; the Wets saw the Cleans with losses and only the Dirties managed to clinch two points… Geopolitics are on the brink of a total recall with BREXIT becoming the pussy-cat so to speak but in a tough way… Aesop has always been revisited… my grapes are sour… John Faraclas’ brief recap:

The Capes unsustainable with the BCI down five point at 423…

The Panamaxes’ BPI lost three points and now stands at 1,071

Losses for the Supras and Handies; the BSI was down three points at 715 and the BHSI down five at 406…if the fall continues, Handies will go under the 400 point threshold and that will be hard to digest….

The Wets as said above with mixed feelings; the last published BDTI (Dirties) and BCTI (Cleans) stood at 620 – plus two  and  596 – down four with the loss also of the 600 point threshold!!!!

In the Geopolitical front still the MIGRANTS maintain the top place…

BREXIT looks as if the cat is out of the bag and impossible to put back as, if Mrs. May is replaced by any Tory hardliner, there wouldn’t be a deal achievable in the parliament and only a referendum or even a general election will be left as an answer…

After these options we will have to revoke Article 50 but for the next 10 years at least the Brexiteers will continue to control the Tories… or does Ms. May has under her sleeve a few more aces…

Europe enters a period of uncertainty and, being virtually bankrupt, many things can happen… Planet Ocean is bankrupt too – US$ 250 trillion! Any objection?

Now did I hear you say Wikileaks?  Well, now the shit will hit the fan! Julian Assange has been arrested after being “stationed” seven years at Equador’s Embassy in London…

On another tone and note down in East Med, Cyprus, at the Limassol’s Grand Resort, the 7th Bunkernet Conference took place with six excellent speeches and a panel discussion moderated by Nigel Draffin. Amongst the speakers many friends and supporters of allaboutshipping.co.uk 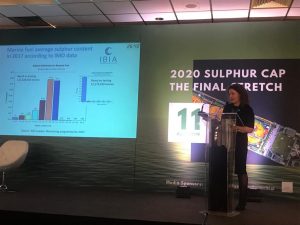 Many Thanks to Sofia Konstantopoulou, Global Head, Marketing & Events at IBIA for her informative notes!

Have a nice evening and remain on guard from actions emanating from Pirates, Terrorists, Criminals and any Business Hooligan whatsoever wherever you are on Planet Ocean!