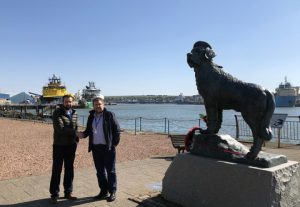 Grangemouth, United Kingdom, 11 April 2019 – GAC UK has opened its 20th branch at the historic port of Montrose on the east coast of Scotland, just seven months after welcoming its 19th office at nearby Dundee.

Established in 1493, the port of Montrose is known as the “gateway to the North Sea” and is now a thriving support and service hub for the energy and shipping industries, as well as other shipping sectors including cruise. More than £22 million has been invested in upgrading its infrastructure since 2010 – with the latest reinforcing two of its berths at a cost of £7.2m – as part of Montrose Port Authority’s 25-year masterplan supported by a £1.5m Scottish Government grant.

This latest addition to GAC UK’s network of bases serves the needs of shipping customers and the oil, gas and renewables sector throughout the UK and beyond.

It is overseen by GAC UK Agency Manager David Thorburn, who says: “This new strategically located base supports our growing oil, gas and renewables activities, and enables us to respond faster to our customers’ needs for their projects.  It also puts us in the perfect position to further strengthen our ties with the port and local suppliers to better serve our customer base.”