Oslo Børs: Most valuable stamp of the year ‘admitted to listing’ 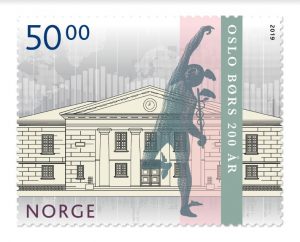 Oslo Børs: Most valuable stamp of the year ‘admitted to listing’

Today Norway Post is issuing a special stamp in connection with Oslo Børs’ 200-year anniversary. The value of the stamp is NOK 50.

“NOK 50 is the highest value stamp that will be issued this year, and we think it is right for Oslo Børs as a weighty and important organisation to feature on stamps for somewhat heavier items”, explains Halvor Fasting, Director of Stamps at Norway Post.

Jørn O. Jøntvedt has designed the stamp, which features the stock exchange building and has Oslo Børs’ statue of Mercury in the foreground. The vertical pink stripe is intended to reflect the pink paper used by financial newspapers such as the Financial Times, while the green stripe symbolises a security. The grey background is made up of a map in the middle of which is Norway, and this is accompanied by graphs and figures that are intended to symbolise transactions and fluctuations in the stock market.

Norway Post issued its first stamp in 1855. The commemorative stamp produced for Oslo Børs’ 200-year anniversary is number 2,004 in the series.

The stamp can be used to send letters that are 2-7cm thick that weigh up to 350g, and will be on sale at post offices from Thursday 11 April.

Brexit commentary | How this extension will benefit businesses