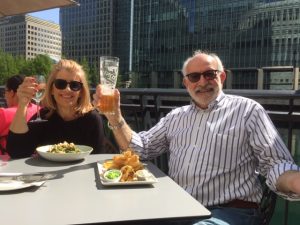 Happy Easter, He Has Risen!

Part of the Christian World Celebrates Easter today – particularly the Western so to speak Christians.

On a unique sunny day with temperatures soaring to 21C,  instead of our classic Easter Sunday visit in Hampstead Heath, we* set off for East London’s Docklands and then sailed back from Canary Wharf to Westminster. 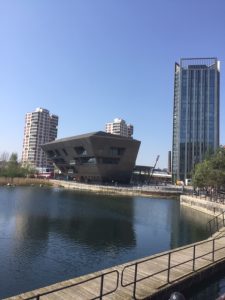 Canada Water; tranquility at its best

Canada Water was our first encounter and we strolled around its great embankment; many people of all ages and from all over the world created the right atmosphere. A unique experience, the momentum to unwind!

Afterwards at lunch time we went to Canary Wharf and its unique Plazas with Restaurants and Bars full of people of any age and race you can imagine; at least two dozen Greeks… Noah’s Arc has just berthed…

After having lunch at All Bar One off Reuters Plaza at the Middle Docks – Mackenzie Walk, we walked all the way down to the pier to board one of the MBNA’s Thames Clippers. 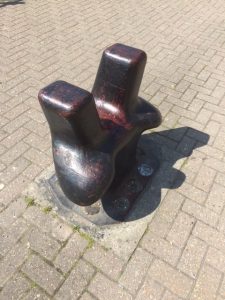 What a journey that was; friendly and well trained crew – both male and female seafarers; WISTAs would have like that…! Magnificent views which was what we really really wanted and given the weather it was beyond expectations.

Normally we do the September trip with the Paddle-ship the “Waverley” – an event organised by Jonathan Morley of Lloyd’s Register which is an early evening trip down from Tower Bridge to the Thames Barrier and back in support of the Inland and River Waterways as well as Maritime Tourism; you can see our visits and respective trips by boats in Tromso – Norway, Amsterdam, Hamburg, Venice, Copenhagen, Camden to name but a few in respective articles in this site… 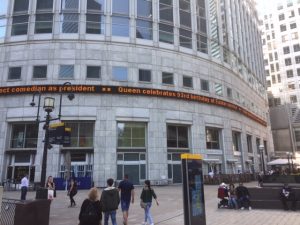 Most buildings from both sides of Father Thames were refurbished   or under renovation. Many sea-sport and fast cruise enthusiasts were criss crossing the river.

At Westminster it was as if 100,000 people had staged a big party and in Parliament Square the Environmentalists continued their cause. Indeed the Environment to all intents and purposes is a must to be preserved… Climate Change will also affect us all. As you read this lines the temperature is 24C; yesterday was a record day at 25.5C !

A glorious day and obviously the Easter mood helped a lot. It was also H.M. The Queen’s birthday! Happy Birthday Your Majesty! 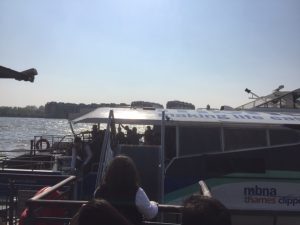 just before boarding the Thames Clipper

It’s important though to see Easter for the Western and Eastern Christian Churches to coincide. It’s worth giving it a try as this is being considered as another continuous schism. It helps both sides of the “dividing” line of the Western and Eastern Roman Empire – still a factor due to religion – to change things and bring all Christians together. It helps people and business all over Planet Ocean too as holidays are important to all and loss of productive hours, when employees need their “own” Easter, cost dearly to all. 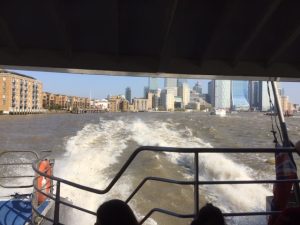 A view of Father Thames from the stern 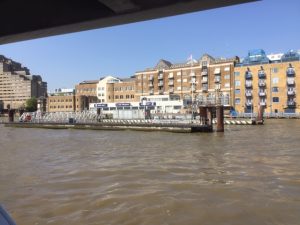 Now establishing that Easter is to be held on the first Sunday that occurs after the first full moon, which follows the vernal equinox, but always after the Jewish Passover is one thing; science, reality yet another! Easter can also be delayed one week if the full moon is on a Sunday which decreases the chances of it falling the same day as the Jewish Passover. At the Council of Nicaea (Nikea) was established the Easter date for all Churches around Planet Ocean, but not all Christian Churches observe Easter in accordance with the Gregorian Calendar… 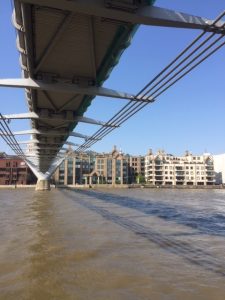 passing under the Millennium Bridge

I guess it is about time we all have Easter on the same day! It’s worth the effort and unity in this aim of all the Christian Churches and its faithful.

…and Comedy has its Day; Ukrainian comedian Vlolodymyr Zelenski wins 73 centum of the vote and becomes his county’s president. Watch this space!

On a sad note now: After a wave of blasts targeting churches and hotels in Sri Lanka over 200 are feared dead and 400 injured amongst them many foreigners – mainly tourists. Unfortunately we might hear more casualties in the worse incident since the end of the civil war ten years ago. Shame! 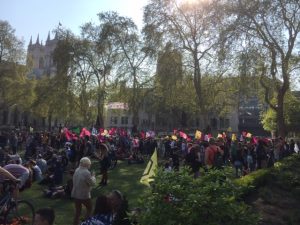 Reverting with the Orthodox Easter next Sunday.