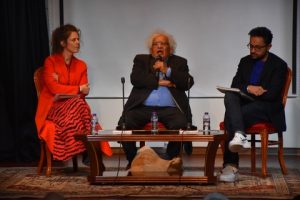 Passions continue to run high a century after one of the most notorious episodes of colonial rule in India.

Members of an audience vented their emotions at a packed event at the Nehru Centre, the cultural wing in London of the Indian High Commission, to commemorate what is known as the Jallianwala Bagh massacre of April 13, 1919. That was the day Brigadier General  Reginald Dyer ordered his troops to fire without warning on an unarmed crowd trapped in a walled park in the Sikh holy city of Amritsar (now administratively in India’s Punjab state) killing hundreds and wounding many. 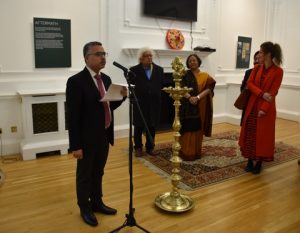 Exhibition inauguration at the Nehru Centre.

That violence and other cruelties during colonial rule have left an acid after-taste in Punjabi  and throughout India, although few people in Britain, even in contemporary Sikh communities, have in recent years been conscious of  what happened.

The remembrance meeting on April 12, 2019 at the Nehru Centre in Mayfair went alongside the opening of an exhibition organised by the Loomba Foundation – established in the UK in 1997 by Lord Raj Loomba and Lady Veena Loomba to foster empowerment of widows and education of their children — recounting the background to the massacre at Amritsar.

Strong criticism of the British action at Jallianwala Bagh came from the panel assembled at the Nehru Centre (Labour peer Lord Meghnad Desai, Manchester Museum director Esme Ward and journalist and author Sathnam Sanghera) and even sharper words were uttered from the auditorium during question time. 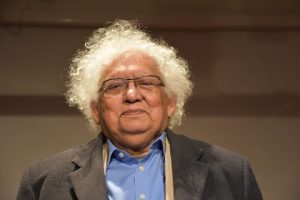 The London exhibition has first-hand testimonies and accounts by witnesses of the slaughter before and after  April 13 1919, reaching out for a deeper understanding of the root causes and effects. The exhibition includes archive images, footage, and audio.

It makes clear that there was a much larger pattern of oppression, which had already sparked considerable unrest among the population. Resentment was fuelled by emergency powers during World War I intended to stem acts of rebellion.  India’s huge manpower contribution to allied forces had led to expectations that the country would be granted some autonomy, but these were dashed by the so-called Rowlatt Acts in early 1919 which extended the wartime measures. 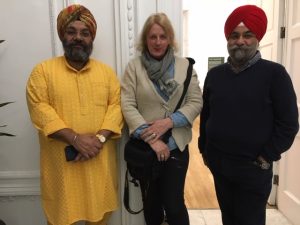 The arrest of prominent Indian leaders sparked violent protests in Amritsar on April 10, in which soldiers fired on civilians, buildings were looted and burned, and foreigners were killed. Public meetings were outlawed and General Dyer was told to restore order,.

The London meeting heard that on April 13, a crowd of at least 10,000 gathered in Jallianwala Bagh, an enclosed garden the size of Trafalgar Square with only one narrow exit. Some were protesters but many had come from the surrounding region to celebrate Vaisakhi, the Sikh spring festival.

Dyer and 50 soldiers sealed off the exit and loosed their entire ammunition of 1,650 rounds. The gunfire was so heavy that even people outside the enclosure – including some standing on balconies – were killed. The official death toll was 379, but it was probably closer to 1,000, with more than 1,000 wounded. They were Hindus, Muslims, Sikhs. Soldiers were forbidden from helping the wounded, and families were kept away for 24 hours.

Inaugurating the London display, India’s High Commissioner in the UK Ruchi Ghanashyam said that the tragedy “shook the hearts, minds and souls” of people in India. Scars of the sad episode had remained in the memory. She urged people to visit the exhibition so that this memorial to the grim events would not be forgotten.

In the panel presentation to the meeting, it was related that the 10 minutes of murder was followed by the proclamation of martial law that included public floggings and other humiliations. Widespread outrage prompted Mohandas (Mahatma) Gandhi to initiate the following year large-scale, non-violent protest (satyagraha) in the cause of Indian nationalism and independence. The Bengali poet and Nobel laureate Rabindranath Tagore renounced his knighthood.

Most shocking perhaps was that Dyer never showed remorse, calling the victims “the targets”, and said he had acted “to save the British Raj.”

An investigation by the government of India in 1920 censured Dyer and ordered him to resign from the military. Others condemned Dyer’s actions—including Sir Winston Churchill, then secretary of war – but  the House of Lords praised Dyer and gave him a jewelled sword inscribed “Saviour of the Punjab.” A fund equivalent to £1.3m today was raised by Dyer’s sympathisers and presented to him.

The Partition Museum which opened in August 2017 in the historic town hall in Amritsar, has since August 2018 shown extensive materials on the 1919 events. The Partition Museum is a memorial to those who lived through the India/Pakistan partition, the largest mass migration in history. The Jallianwala Bagh site is now a national monument.

At the Nehru Centre the exhibition underlined how important Britain saw trade with India – among other freight sent over the seas were imports of tea and exports of cotton piece-goods. A short film, Punjab Under Siege, highlighted the whole era of repression.

Sathnam Sanghera, a columnist and author born to Punjabi parents in Wolverhampton in the English Midlands in 1976., confessed he grew up in ignorance of the massacre. No-one had mentioned such events or the fact that thousands of Indians had died during the world wars. With the centenary of the atrocity approaching, he had wanted to find out more and had been shocked by details of the killing of men, women, children and babies. He spent five months making a documentary which was screened on Channel Four television in the UK on April 13 2019.

In a graphic description of the incident and its aftermath, Sathnam Sanghera said that British reprisals for the protest amounted to “racial humiliation.  Any Indian who did not salute a passing European was flogged, and power was cut off to the whole of Amritsar.” He had met the descendants of some of the British officers and the view was the crowd on April 13 1919 “was asking for it.”

He said that education in schools had produced a “warped idea of what empire was.”

Esme Ward, director of Manchester Museum, which is building a special South Asia gallery, spoke of the importance of not denying critical facets of British history. In addition to marking the Jallianwala Bagh story, her museum had been highlighting the Peterloo Massacre of 100 years earlier, when at St Peter’s Field, Manchester, on 16 August 1819, sabre-wielding cavalry charged into a crowd of 60,000 to 80,000 gathered to demand parliamentary reform. Eighteen people died and at least 400 were injured. Ms Ward said: “There are so many stories in the museums that we do not tell.” Society should examine from where it got its misconceived conclusions.

Chairing the panel discussion, Lord Desai said on the vexed question of whether Britain should apologise for Jallianwala Bagh: “I think an apology will come because people’s consciousness is changing.”

Lord Desai had earlier in the week told the House of Lords: “The nightmare of the 1857 rebellion haunted some of the officers in Punjab at that time and they overreacted. Punjab was under martial law and it was not only Jallianwala Bagh which was a problem. Throughout April and after, there was martial law in Punjab. Lahore suffered as much as the rest of Punjab and Gujranwala, a small town which is now in Pakistan, was bombed from the air to control what the Lieutenant Governor of Punjab, Sir Michael O’Dwyer, thought was happening. It was a very unusual moment in which Punjab was held almost captive.”

Sathnam Sanghera said that his favourite fact about the British Empire was that “loot” was an Indian word. The British had stolen so much that the word came into the English language.

One of the most controversial aspects touched on by audience members was how history should judge Udham Singh, a 20-year-old who survived the fateful April 13 bloodbath. He had been at the field to serve water as people assembled.

Udham Singh waited 21 years after the atrocity for his chance for vengeance. He made his way to Britain and shot O’Dwyer at point-blank range at a meeting hall near Parliament. When he pulled the trigger on March 13 1940, he became the most hated man in Britain, but a hero to many in India. During his trial, he said that the former governor “wanted to crush the spirit of my people, so I crushed him.” Udham Singh was hanged four months later.

Photos accompanying this article are by Suzanne Hennie Tennes.

Remembering the Jallianwala Bagh Massacre is on display until Friday 26 April 2019 from 10am to 6pm at The Nehru Centre, High Commission of India, 8 South Audley Street, London W1.

Women in Shipping: Navigating to the Top