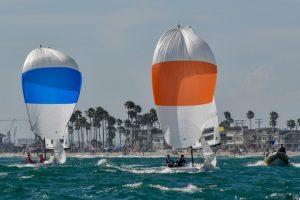 With several highly-ranked match-racing skippers (of any age), the July 15-20 “GovCup” may again qualify for 2nd straight award of Grade 1 status, unprecedented for youth events

Three skippers from the Royal New Zealand Yacht Squadron were selected – more evidence of the excellent RNZYS Youth Training Programme that has produced a number of international “rock star” sailors and is the current holder of the America’s Cup. 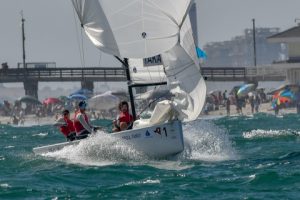 “Leonard Takahashi (NZL) surfing on a downwind leg in the 2018 Governor’s Cup. After
two runner-up finishes, Takahashi will be looking for his first GovCup win in 2019”.
Credit: Tom Walker

This year’s RNZYS skippers include 2017 and 2018 runner-up Leonard Takahashi, as well as Nick Egnot-Johnson, a rising match racing star with a win in the 2018 U.S. “Grand Slam” series and a 5th place finish in his first Congressional Cup last month. They will be joined by Jordan Stevenson, winner of Australia’s Harken youth match racing event and a podium finisher in two other major events in Australia and New Zealand.

There will be at least one additional USA skipper named at the conclusion of the U.S. Youth Match Racing Championship for the Rose Cup hosted by San Diego YC in late June. The Rose Cup winner receives an automatic invitation. In addition, Balboa Yacht Club, as host club, will also name a skipper. If a BYC skipper should win the Rose Cup, one of the alternate skippers named by the Selection Committee will receive an invitation.

In addition to NZL and USA, skippers from four other countries were selected. Sweden will be represented by Mans Holmberg, a World Sailing top-25 ranked skipper based largely on his success on the professional World Match Racing Tour. Jeppe Borch of Denmark will also compete. He is a top Scandinavian match race skipper from a country that has an enviable record in the sport in general and in the match racing discipline in particular. Finn Tapper also received an invitation, representing the Cruising Yacht Club of Australia, a Club that has had consistent representation in the Governor’s Cup and that has produced a number of winners, most recently Harry Price who won for the second time in 2018. Matt Whitfield of the United Kingdom rounds out the international entries and will be competing in his third GovCup. Whitfield recently won his second straight British Universities Match Racing Championship which complements his two UK Youth Match Racing Championships.

The BYC selection committee appointed GovCup veteran Clare Costanzo, representing Australia’s Royal Prince Alfred YC, as the first alternate should any of the others be unable to participate.

“We were pleased with the record number of requests for invitations, and are impressed with the
strength and experience of this year’s selected skippers from six different countries,” said BYC’s
regatta chair Christine Robertson.

“We believe that last year’s GovCup was the first youth event to achieve World Sailing’s Grade 1 status – normally awarded only to open championships (no age limits) of mostly professional sailors, even though GovCup sailors must be under 23.” Robertson added, “The fact that at least based on the April WS rankings, we may achieve that two years in a row is a tribute to the GovCup as a premier event, and to the immense talent of the invited skippers.”

The Governor’s Cup Committee also announced a new presenting sponsor, Disc Sports and Spine Institute, founded by BYC member Dr. Rob Bray. One of the top orthopedic surgeons in the United States. Dr. Bray and his wife, Tracey Kenney-Bray, are committed sailors and supporters at BYC and beyond. In 2013, Dr. Bray served as team doctor for the Oracle Team USA America’s Cup team.

“We are grateful and honored by Rob and Tracey’s willingness to help take the GovCup to an even higher level, and we look forward to a long relationship”, said Governor’s Cup Sponsorship Chair Andy Rose.

Identical “GovCup 22” sloops will again be provided to all competitors. First used in the 50th Anniversary regatta in 2016, they were designed by former BYC Commodore Alan Andrews and built by Westerly Marine in nearby Santa Ana. More than a few recent GovCup skippers have said that the GovCup 22s are among the best, if not the best, match racing boats in the world. They feature a “flat top” mainsail, masthead spinnaker, modern “T” keel and an “all up” weight of only 1470 lbs (666 kg).

The 53rd Annual Governor’s Cup, presented by Disc Sports and Spine Center, will be held July 15-20, 2019. The traditional “Meet the Teams” kick-off dinner will take place Monday evening July 15. A double round-robin of racing is scheduled Tuesday through Thursday with the top four teams advancing to knock-out Semi-Finals on Friday; the Finals are on Saturday, July 20.

Again this year an all-volunteer “GovCup TV” team will live-stream via the internet the Monday evening festivities, the racing on Friday and Saturday, and the post-racing press conferences Friday and Saturday, including the Saturday afternoon prizegiving. Live “Pre-Race Shows” featuring a preview of the day’s racing, and interviews with competitors and officials, also will be aired Wednesday through Saturday mornings.