Ana Irene Delgado got elected as a Panamanian Senator 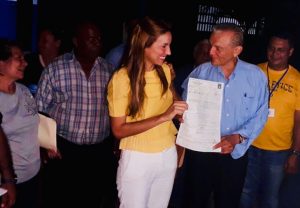 Former Panama Ambassador to the UK, Ireland and Iceland and Panama permanent Representative to the IMO just got elected as a Panamanian Senator.

She said: “We hereby express our gratitude to the more than 500 maritime and terrestrial communities of the circuit 8-4, Chepo, Chiman, Balboa and Taboga, as well as to the Indigenous Communities Embera Alto Bayano, Comarca Cuna de Mandungadi and Indigenous Areas of Chiman for the massive support we received in the recent general elections on May 5, in which we were elected by the vast majority of the electoral population cited, we extend this thanks especially to our DELGADO team, the Authorities, the leadership of our Democratic Change Party and all the staff at our central office in Chepo and in Panama City.