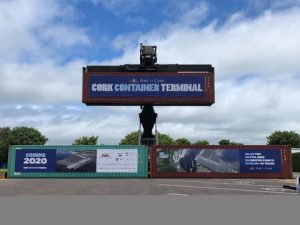 Cork, Ireland, 9 May 2019 – The Port of Cork and its partners were ‘highly commended’ at Tuesday’s Seatrade Awards in the ‘Deal of the Year’ category in recognition of its work in securing significant funding for the development of the new Cork Container Terminal (CCT) in Ringaskiddy, which will open in 2020.

The funding for the €80m project was secured from a combination of sources including the Allied Irish Banks p.l.c (AIB), the European Investment Bank (EIB), and the Ireland Strategic Investment Fund (ISIF), as well as EU Connecting Europe Facility funds, and self-finance. €1m of the total capital secured is allocated to a community gain fund for the Ringaskiddy area.

The deal represents a major commitment and pan-European belief in the future of the Irish maritime sector and took two years to complete. It puts in place an innovative transaction structure involving senior debt from AIB and EIB and junior debt from ISIF. As a key infrastructure deal, the project will increase future capacity at the port and bring major strategic value to the city of Cork and the wider Munster region, as well as the overall Irish economy.

Established in 1989, the Seatrade Awards recognise shipping’s most impressive innovations and achievements. Through its 30-year history, the Awards have provided a reliable benchmark for success, the trends affecting the maritime world, and celebrated those who are driving the industry forward.

The Port of Cork was recognised by the EU as a ‘core’ port on the North Sea Mediterranean Corridor, and identification by the Irish Government as a Tier 1 Port. Secured through an innovative financing structure, the funding arrangement represents the most significant single investment in marine infrastructure and superstructure in the 200-year history of the Port of Cork.

Donal Crowley, Chief Financial Officer & Deputy CEO of the Port of Cork commented: “The Port of Cork’s natural deepsea harbour and geography makes it ideally placed to enhance trade between Ireland and the rest of the world. But no matter how necessary the move to expand the port was from a strategic perspective, securing funding for the project was a huge challenge, and we must credit our finance team at the Port, and all our finance partners for arranging this innovative deal.

“The deal not only secures the port’s legacy and delivers a 21st century terminal but cements a bright future in terms of the port’s growth to benefit the local Cork area and the wider Munster region economically.

The CCT redevelopment is a Strategic Trans – European Transport Network (TEN-T) project, recognising the Port of Cork’s significant growth potential. The first phase of this development provides critical replacement facilities for the Tivoli Container Terminal and will initially span a 360-metre quay with 13 metre depth alongside; initially enabling vessels of up to 4,000 TEUs berth.

The development includes the construction of a 13.5 hectare ‘greenfield’ terminal, serviced by modern and efficient cargo handling equipment, with innovative terminal operating and vehicle booking systems.