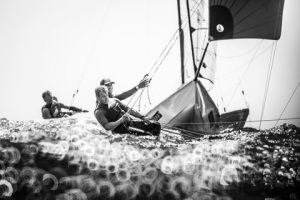 49er: A Bag of Bullets for Burling

They’re not long back in the boat after their two-and-a-half year holiday in the America’s Cup and the Volvo Ocean Race, but already Peter Burling and Blair Tuke are back at the top in the 49er after firing three bullets in a row today. “Nice day out,” smiled a typically straightforward Burling, checking carefully over every part of the rig after a testing outing for the 96-boat fleet.

It’s not that it was uber-windy, but the easterly breeze had kicked up some big waves in Weymouth Bay, offering plenty of opportunity for an unwanted high-speed pitchpole. The Antipodeans are muscling in on the European party, both Kiwis and Aussies enjoying the big breeze, big wave conditions. The only European team in the top four is Spain’s Diego Botin and Iago Lopez who were almost as dominant as the Kiwis in their third of the qualifying draw, scoring 2,1,1. “It’s so nice to be racing in good conditions again,” said Lopez. “Today was a great day for 49er sailing.”

The Spaniards are just a point off the Burling/Tuke lead, and just two points adrift of the Spanish are the Aussie brothers Will and Sam Phillips who scored three second places behind the unstoppable Kiwis. “Got to be pretty happy with that,” said Will after snapping at the heels of the reigning Olympic Champions all day. “Still a long list of things to work on, but we’re getting there with our starting and boat speed was pretty solid.” His favourite bit of the day was the two-sail blast back across Portland Harbour, back in the relative safety and comfort of the flat water after the lumpy challenge of the Bay.

Rio 2016 bronze medallists Erik Heil and Thomas Ploessel were fast out of the blocks in the morning, winning their first heat, but ran out of steam as the day progressed. “I was getting tired,” smiled Heil, sounding like a broken man. They pitchpoled in race two but recovered to a still respectable 10th place. “I was losing concentration because we were getting tired.” Then they capsized again in the final race of the afternoon, this time only managing an 18th. Despite their topsy-turvy moments, the Germans hold on to 7th place overall.

Austria’s Benjamin Bildstein and David Hussl struggled in yesterday’s conditions but got their mojo back on day two, scores of 1,1,5 lifting them to 12th overall. Great Britain’s Chris Taylor and Sam Batten had just put together a good set of results – 7,4,9 – and were enjoying the ride back home across the harbour when their forestay snapped at the top terminal. “The rig dropped back but the boom sat on the leeward wing and sort of supported the mast until we had time to re-tie the kite halyard as a temporary forestay,” said Taylor. So no real harm done, and a big day’s sailing that has planted a big grin on every face of the 49er fleet.