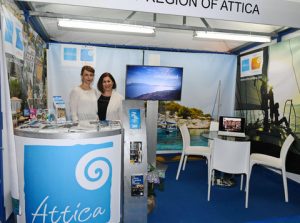 The Region of Attica stand

With its participation at the 18th “East Med Yacht Show”, which was organised by the Hellenic Professional Yacht Owners Association (HPYOA), from 10 to 13 May 2019 at the Zea Marina in Piraeus, the Region of Attica effectively promoted its extraordinary coastline and nearby islands as international maritime tourism destinations.

The show was once again organised under the Aegis of the Region of Attica, which welcomed visitors and industry professionals (tour operators and yacht brokers) to Stand Α03, showcasing the multitude of options it offers for all year round short break holidays, emphasising on maritime tourism. With comprehensive printed and audiovisual material for its tourism promotion, the executives of the Region of Attica Tourism Directorate presented the beautiful Argosaronic islands, Kythera and Antikythera, the unique possibilities offered in Attica for yachting and sailing, as well as its awarded coasts and marinas. As it was recently announced by the non-profit Foundation of Environmental Education (FEE), 21 beaches and 4 marinas throughout Attica were awarded by the Blue Flag Program in 2019, the world’s best recognised voluntary eco-labels awarded to beaches, marinas, and sustainable boating tourism operators. 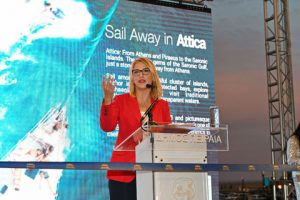 During the opening ceremony of the 18th “East Med Yacht Show”, the annual event of the Greek Yachting Industry, the Regional Governor of Attica, Ms Rena Dourou, stated that the Region of Attica has all the prerequisites to be established on the world map of maritime tourism. In her brief speech, Ms Dourou emphasised on the dual competitive advantage of Attica, since on one hand it hosts the second biggest port in the Mediterranean, Piraeus, and on the other hand it boasts an exceptional coastline, combined with the unique islands of the Argosaronic Gulf. Ms Rena Dourou added that the Region of Attica is present and supports every initiative that contributes to the promotion of Greek maritime tourism and the multidimensional tourism development of Attica, while she also referred to the measurable results of the last 4.5 years, which are outcome of target-dedicated and carefully planned strategic actions and synergies. 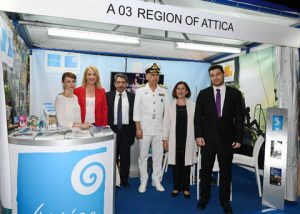 from the stand with Rena Dourou, Takis Hadziperos, the Commandant of the HCG Admiral Raptis, Eleni Dimopoulou

The event’s opening ceremony was also attended by the Executive Regional Councilor for Tourism Promotion, Ms Eleni Dimopoulou, whom the Regional Governor thanked for the participation of the Region of Attica at the 18th “East Med Yacht Show”.

Alongside this year’s exhibition, the Region of Attica Directorate of Tourism organised a thematic “Nautical Yachting Press Trip” from 12 to 15 May, hosting foreign journalists specialising in maritime tourism, yachting and island hopping. The hosted journalists, travel writers and bloggers had the opportunity to visit the “East Med Yacht Show” on Monday 13 May, where they discussed with the exhibitors, were given tours around the yachts and all the necessary information and material for their future articles-features on Attica’s maritime tourism. 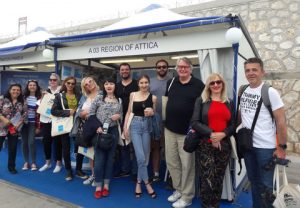 Visitors at the Region of Attica stand

Within the following days, there will be a comprehensive report on the “Nautical Yachting Press Trip” in Attica, as well as detailed updates on the printed and electronic publications of the foreign journalists from their travel experiences in Attica.