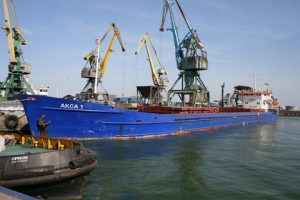 A vessel’s loading / discharging operations at the Port of Tangrog

In the first quarter of 2019, Taganrog Sea Commercial Port JSC (TagSCP, a company of UCL Port) handled 323,000 tonnes of cargo, down 3%, year-on-year. The decrease should be attributed to business decline in foreign trade markets dealing with the port’s key types of cargo, coal and grain.

Container throughput of TagSCP decreased by half to 300 TEU (600 tonnes).

About the company:
Taganrog Sea Commercial Port JSC (TagSCP, a company of UCL Port, stevedoring division of the international transportation group UCL Holding) is a key stevedoring company operating at the port of Taganrog. The company operates at the port’s Berths No 1, 2, 3, 4, 5, 7 and 8. In 2018, TSCP handled 1.25 million tonnes of cargo.

Live from the Volvo European Championship