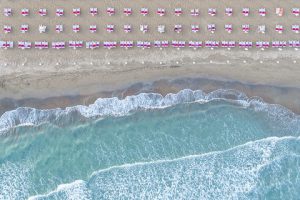 The Beach of Jesolo Pineta. By Giovanni Vecchiato.

He is “the van Gogh of the drone.” This avid assertion is advanced for photographer Giovanni Vecchiato who, at the Italian consulate in London, is exhibiting 27 spectacular images he captured by pitching a camera-freighted drone over swathes of Italy’s coastline. 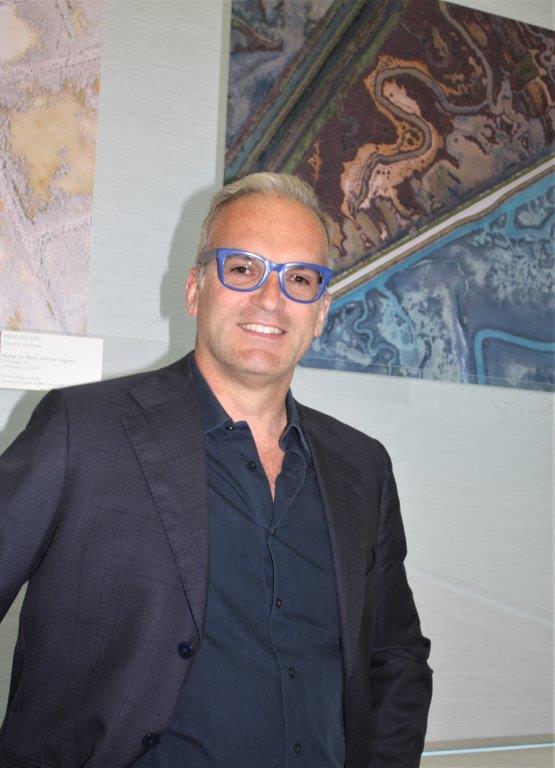 The title for this series, Views-My-Eye, verifies that while he has much to be grateful for this trendy technology, it is ultimately the skilled eye of the photographer that seals superbly memorable compositions.

This is what a phase one of a sublime “fly me to the moon” ride must be like. The marvel of startling perspective materialises but a few dozen metres above terra firma. New vistas of coast, city, countryside, rivers and ski slopes endow with brilliantly fresh colour and configuration what from earth-level seem random phenomena.

From aloft, all is life force, grandeur, luminosity. The skill is to capture eloquently with the camera such splendour. 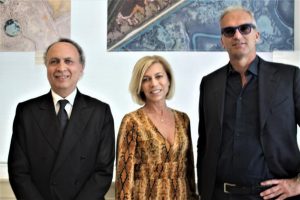 The landscape blooms with magic quality when handled with the sureness of Giovanni’s rapidly acquired, drone-denominated style. We are seeing the unseen.

Carola Syz Projects has brought the work of Giovanni Vecchiato to London, with the support of Italian consul general Marco Villani. At the private view, Mr Villani, who has been in post since March 2018, praised what he said were “extraordinary photos.”

“This is not meant to be pretentious or arrogant,” added Carola, “but I speak of Giovanni as the van Gogh of the drone. He was primarily a photographer of portraits and street scenes [describing his locales as “where humanity meets: squares, markets, parks, schools, offices and ceremonies”] … and then he bought a drone eight months ago.” 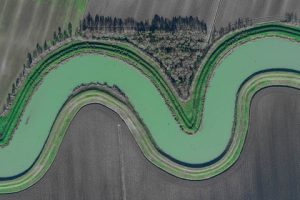 The “Snake” of Dese River.

The purchase led him to discover and exploit a new, three-dimensional focal point.  “The drone has become for Giovanni more than just a ‘camera in the clouds.’ It is an opportunity to experiment with colour and shadow,” said Carola. He began to turn the channels of the Venetian Lagoon into abstract images and the streets of historic districts into colourful labyrinths.

Giovanni spoke of how drones allow the curious to delve into remote areas, exposing hidden horizons and panoramas and private areas (subject to permission from farmers and other landowners).

Giovanni produces his masterpieces of frequently linear character by using a smartphone app to control a drone-borne Hasselblad, the renowned brand of camera which was even taken to the moon during the Apollo space programme. Operating a camera from an unmanned aerial vehicle has become increasingly economical, and easier to use.

From the air, banal views become magnificent as the photographer can “play with assets, the colours, shapes, geometries.” Matter appears to fuse into form and colour which communicate directly with the mood of the observer. The “bird” is privileged to see beautiful light and colours below with an inventive palette a filter for Giovanni’s creative passion. 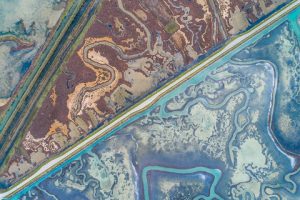 The “Split” in Venice Lagoon.

One might pause to wonder that in his fascination with flight to enhance knowledge of our environment Giovanni shares with his great compatriot Leonardo da Vinci the aspiration to use new mechanisms to soar higher than the body can propel itself naturally.

A symbolic picture for the London exhibition is The Beach of Jesolo Pineta (Venice) one of the most dramatic shots highlighting the meeting of shore and water at an area noted for its pine forest. Giovanni was born in Castelfranco, Veneto, and: “I live by the sea; I love the sea.”

In the same locality, sunbathers are dotted like patterned cloth in a beach scene in The First Warm Day in Jesolo.

With Burano (Venice) houses in the group of islets noted for lacemaking and fishing are picked out in pink, blue and yellow. Th reason for the garish colour scheme is that this made it easier for fisherfolk to identify their homes when they made their way home with their catches in the fog.

Another aerial photo The “Split” in Venice Lagoon transforms the geography into designs akin to something produced by the marbling technique in painting of dipping colourful pigments in oily water. 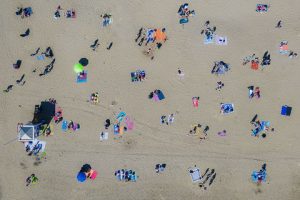 The first warm day in Jesolo.

The “Snake” of Dese River (Venice) is indeed sinuous, and Lines and River in Veneto Countryside continue the theme.

Water on Mars, Venice Lagoon is reminiscent of a view of the red planet, but in fact the craters are fish farms — Giovanni took this one in January, when there water in the tanks was low. This was the first picture he took using a drone.

Giovanni showed two photos of Flamingos in the Lagoon of Venice, one of which was published by National Geographic magazine. The graceful pink birds live in places hard to see from the ground, and Giovanni has ‘captured’ them both from the air and at sea-level. They migrate to areas near his home, from late winter and early spring. One estimate is that off Burano, there are 8,000 of the species. They have been encouraged by modest improvements in Veneto’s dim pollution record, and artificial channels and mudflats.

Also featured in the magazine was Blocks on Cliffs, Polignano (Apulia), contrasting the azure of the sea with the grey and blue of the houses and the red of the terraces. From on high, the scene is totally different from what can be seen on the ground.

Blazing sun casts Fire into the Stones of Matera in southern Italy, while against the stark white snow of Trentino Alto Adige, it is hard to distinguish winter sports enthusiasts from their long shadows. This is so in the trio Skiers Crossing, Busy Slope and Shadows Towed by a Sledge.

There is much fascination with the Veneto countryside and with forest shadows, The Moroccan Carpet is in fact the stripes of vineyard rows, and slender tree shadows create A “Comb” in Maremma (Tuscany).

Three studies are entitled Red Roof on Green, Veneto countryside, but show different angles and seasons. A red-roofed farmhouse stands out solitarily and sharply, while the green of the land varies from intense to more muted hue.

Giovanni was set on the road to photography and technical precision as a child with a gift from his father of an old analogical Zeiss camera. 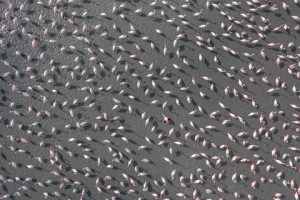 Flamingos in the Lagoon of Venice.

He went on to travel within Italy and more widely, among other destinations to Yemen, Israel, Palestine, Cuba, New York, Hong Kong, Lesotho and Iceland. He indulged his second passion for endurance motorbiking as he photographed the deserts of Oman, Egypt, Morocco and Algeria. He is now based in London and Venice.

Carola said: “The beauty in these images is like a dialogue between the infinitely small and the infinitely large which lives in each one of us. In this way photography becomes the instrument with which to explore the essence of everything… [in] pure, almost abstract rhythms.”

The exhibition launched during Photo London Week The fifth edition of Photo London, at Somerset House from May 16-19 featured more than 400 artists.

Meanwhile, for Giovanni, the sky is the limit.

Views-My-Eye: photography by Giovanni Vecchiato, is organised by Carola Syz Projects and continues until September 20, 2019. Viewing is by appointment at the Italian Consulate, 83-86 Farringdon Street, London EC4.