Visitors ‘blown away’ by Inspired, a new exhibition at London Glassblowing 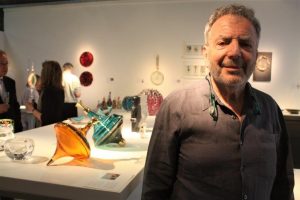 Visitors ‘blown away’ by Inspired, a new exhibition at London Glassblowing

Swathes of UK manufacturing industry – the latest being in motors and in steel – are undergoing meltdown.  Paradoxically, the furnaces are burning bright in rejuvenated old London to breathe life into one of the world’s most ancient crafts, that of glassblowing. 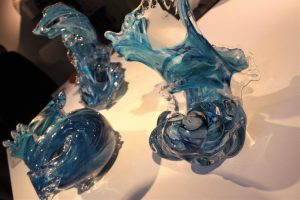 London Glassblowing, a store, showroom and bustling workshop in once run-down but now trendy Bermondsey Street, is thriving. It keeps a furnace roaring non-stop at 11,000 degrees Celsius with 150 kg of molten glass to support the creativity of resident and guest artists.

The venture is a looking glass into an increasingly popular branch of decorative art.

The street is almost under the shadow of The Shard, a “vertical city” 309 m high which is claimed to be Western Europe’s tallest building at 95 storeys and with the exterior covered by 11,000 panels – of glass. 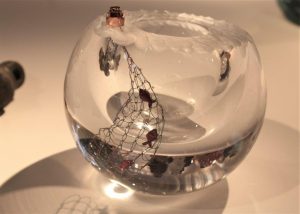 In the Net. By Jenny Ayrton.

Shelves at London Glassblowing are always stocked with brilliantly-lit pieces of mostly non-functional sculpture, and such display reached its apogee – so far – with a new exhibition (until June 15, 2019) under the title Inspired, the labour of more than 40 members of the Contemporary Glass Society.

Awash with shimmering reflections of electric and natural light, it is a selection by a jury of work for which each participant was “inspired by an object of personal significance.”

Out of the white heat of the kiln and of the imagination, established and emerging artists are presenting beautifully wrought pieces, supplying intriguing backstories and technical details behind their productions. 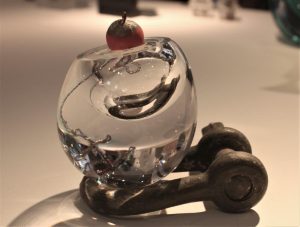 The Orange Buoy. By Jenny Ayrton.

As one of the artists underlined, in the past few decades the UK has switched from a nation of 80% manufacturing and 20% services, to the reverse percentages. The determination of these glassblowers to maintain their craft in its rightful place in the corpus of high art was as crystal clear as the material which they fashion so lovingly.

The founder of London Glassblowing is Peter Layton, a veteran of studio glass. He enthused to guests at the private view: “I have seen a fair few glass shows [in my time], and I don’t think we have shows that are this good in the UK.  It is a breath-taking show.  Everybody has done marvellously.”

His contribution to the exhibits were contorted glass forms stimulated by The Great Wave off Kanagawa, an iconic woodblock print produced in the 1830s by the Japanese artist Katsushika Hokusai. The print motivated him to field a variety of forms, colours and techniques allowing what Peter called “a sense of frozen movement.” 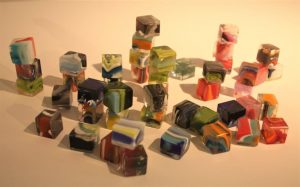 Another of the dynamic makers, Devon-based Jenny Ayrton, explained how her project recalled scenes harking back to her childhood “messing about in boats.” She said: “These pieces take inspiration from my love of the sea.”

Jenny created delicate wire anchors and fishing nets encased in layers of blown glass. She worked with a master glass blower, the appropriately named Richard Glass, and cut, engraved and polished chunky blown forms focusing on texture and detail. To give a sense of scale and narrative, the finishing touch was the addition of cast tiny pewter and copper buoys and boats.

Her sandcast scenes have titles including In the Net, and Orange Buoy.

Jenny, who lives near Plymouth, writes online: ‘I dreamt of exploring the world under sail, and I sort of did for a few years, with jobs ranging from coxswain for a harbour master, to crewing a superyacht. 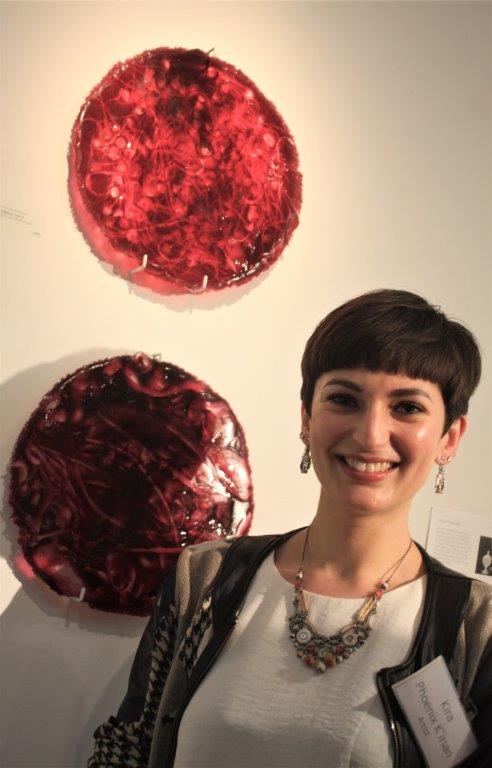 She added: “When you’re out sailing in coastal waters you are constantly affected by the flow of the wind, tide, and local eddies and currents. These pieces were inspired by the easily overlooked buoy, and the rarely viewed anchor that holds it in place. A buoy is a relatively fixed point either to race around, or to catch hold of and make fast to so that you can relax and eat your sandwiches!”

During a chance visit to Plymouth College of Art she watched students skilfully manipulate molten glass and that “reawakened my creative side; and I found myself filling out an application form!”

Tabitha Burrill, who has a workshop in Croatia, showed the joyful installation Child’s Play, small bricks made from fused glass tubes. This was “inspired by the many beautiful antique toys people collect – adult toys that are designed to be looked at and not touched or kept in boxes – too fragile to play with. But I would like this installation played with and touched, it’s about looking at it and moving the bits around, piling them up like a child would, and although it’s fragile, it can still be fun.”

London-based artist and designer Kira Phoenix K’inan showed two pieces from her Magenta Type series. This is a powerful play with elements of the colour wheel. It takes inspiration from the photographic printing process which produces cyan (primary aqua pigment) prints from objects on coated paper reacting to light.

The dense nature of what Kira calls her Magenta Type 6 and Magenta Type 7 – blown glass flattened through the heat of the kiln to “a shadow of the object that once was there” drew much admiration.

Kira in turn praised the wealth of interpretations stemming from the inspirations singled out by her fellow artists.

at the Fitzrovia Gallery, 139 Whitefield St, London W1, on June 5 from 6pm to 8pm when postcard-sized one-of-a-kind pieces will be sold at £40 each. ArtCan is a non-profit organisation supporting artists). 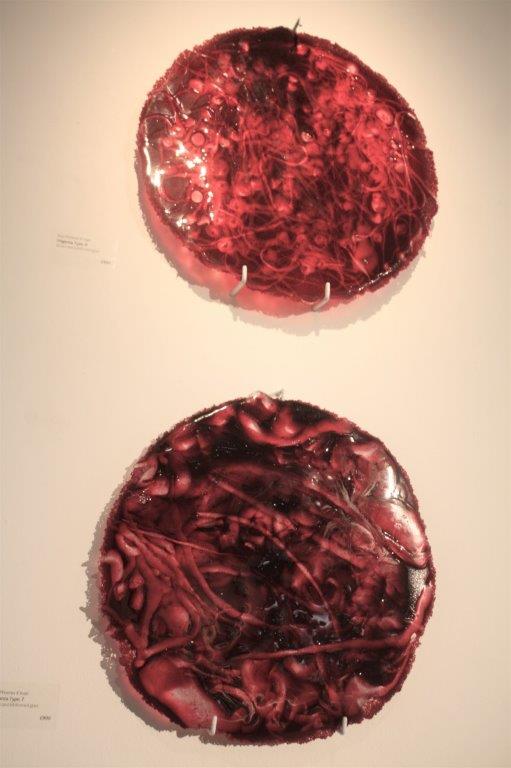 Peter Layton paid warm tribute to curator Cathryn Shilling, his staff and many other supporters.

Cathryn takes a special interest in the relationship between the textures of cloth and glass. Using Venetian glass cane technique she fuses fine threads in a kiln until they resemble sheets of woven fabric, to be re-fired and shaped by moulding, bending or draping. These become three- dimensional artworks ranging from free-standing sculptures to opulent bowls. Other elements of her work result from her fascination with ocean creatures and plants in and around seaside rock pools.

Established by Peter Layton in 1976, London Glassblowing was among the first contemporary hot-glass studios in Europe. It supports the professional development and practice of many artists, and visitors are invited to see free demonstrations of master glassblowing. 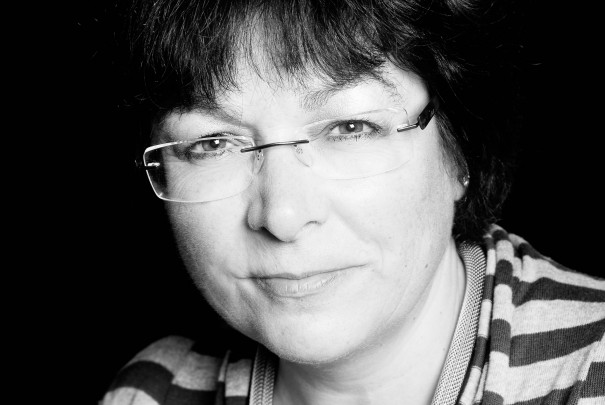 Peter Layton’s daughter Sophie, a skilled printmaker, works a few doors along at Eames Fine Art, 58 Bermondsey Street. Her latest exhibition at Eames is called Refracting Light and extolls her mastery of woodcuts and other techniques honed during a printmaking residency in Japan.

Inspired, an exhibition in collaboration with the Contemporary Glass Society is at London Glassblowing, 62-66 Bermondsey Street, London SE1, until June 15, 2019. https://londonglassblowing.co.uk/the-gallery/

thank you James, so glad you enjoyed the exhibition! I’ll be showing more of this series at The Craft Festival in Bovey Tracey this coming weekend – 6-9th June

Hi James. We are honoured to collaborate with many of the fine glass artists above and are always happy to hear from new artists who would be interested in letting Boha Glass showcase their work.