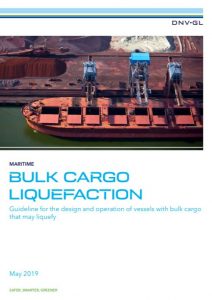 Oslo, 4 June 2019: Classification society DNV GL has released an updated version of its bulk cargo liquefaction guideline at the Nor-Shipping trade fair this week. The guideline covers both the design and operation of vessels with bulk cargoes that may liquefy, and has already contributed to raise the awareness of the risks of cargo liquefaction on ships.

The first version of the guideline was issued in October 2015. The revision takes into account feedback from many readers and new practical experience gained over the past several years. Material has been added to help better describe precautions to be taken during voyages, or if cargo liquefaction is detected. In addition, some sections have been updated to include the latest developments, including DNV GL’s new class notation BCLIQ.

“Cargo liquefaction is the number one safety issue for bulk carriers,” says Morten Løvstad, Global Business Director of Bulk Carriers at DNV GL. “In the last 10 years, over 100 seafarers have lost their lives as a result of liquefaction, which shows that there is still a lot of work to be done. The first guideline was very well received and by updating and expanding it, alongside our new BCLIQ class notation, we hope we can keep the industry’s focus on this critical safety issue.”

The BCLIQ notation, released in 2018, confirms that a vessel is built to minimize the free-surface effect, for example by featuring wide wing tanks and reinforced structural focus areas on the cargo hold side walls, and is consequently able to carry cargoes with a moisture content exceeding the transportable moisture limit (TML). The notation confirms compliance with the SCCS (specially constructed cargo ships) requirements of the International Maritime Solid Bulk Cargoes (IMSBC) Code and enhances the ship’s loading flexibility, efficiency and safety. There are two versions of the class notation: BCLIQ(Cat1) and BCLIQ(Cat2), distinguishing between cargoes that resettle in a stable condition after becoming liquefied, such as iron ore fines, and those that stay liquefied, including nickel ore, bauxite fines and similar materials. The latter are subject to stricter requirements.

The revised guideline can be downloaded here.

Stena RoRo converts two vessels to SERTICA in only 5 weeks

Global trade at risk of disruption without urgent...