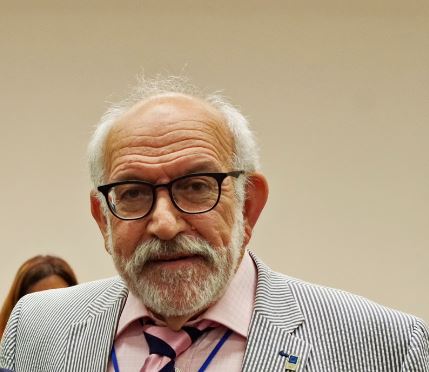 Falling Panamaxes and Surpas though raise eyebrows; the BPI was down 19 points to 1,285 and the BSI down to 731 – minus eight… CAUTION!

Both Wets on a falling mode; the last published  BDTI (Dirties) and BCTI (Cleans) stood at 633 – minus one and 515 – minus eight points respectively!

The messy Geopolitics will lead very soon to a disturbing ten-fold conflict; CAUTION! It’s been 75 years tomorrow from D-Day and wonder when the shit will hit the fan yet again in the Mighty Continent AND beyond. With too many disputes – including trade ones, Planet Ocean is already on fire. Add the fact that the World Debt stands now at US$ 250 trillion and see what you get!

All main issues we cover remain the same: Migrants; the faulty line from Gib to Afghanistan and from the caucuses to the Hon of Africa; The Mighty Continent …err Europe (all Europe, not just the EU) in tatters… ITALEXIT seems very close and wonder who’s trying to stop same and why – no comparison with the GREXIT fears – still on though or the Shakespearean BREXIT saga… Iran must come down to its senses as Uncle Sam is explicit for non-conforming…  The USA itself has too many issues as does Russia and China… Japan and India are closely watching. The African continent with Libya and Sudan on fire plus the poverty anathema triggers more troubles for all… 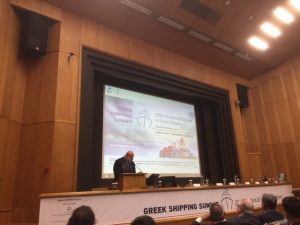 What a great event that was today at the Evgenidion Foundation in Athens; The Greek Shipping Summit “2020: The wind of Change in Global Shipping” shocks Planet Ocean: Great panels and debates and above all a super press conference with the Union of Greek Shipowners president Theodore El. Veniamis not just on a great day, but spelling it out! No hype at all and we provocatively invite those who wish to regulate to come up with their “excuses” on the environmental issues and the 2020 hype! We had enough. We all learn in College the RWA and the RWAD… i.e., the one side is Ready, Willing and Able and the other, Ready, Willing, and Able to Deliver!!! Nothing happens so far and we did stressed this out during IBIA’s Conference 2018 in Copenhagen.- Planet Ocean is NOT ready for 2020; END of the Story!!! We had enough! Congratulations to all at the SeaNation for organising this event and hope the international delegates attending to have now a glimpse of what really happens. Good to see so many speakers from all over the pace and stakeholders covering the entire shipping spectrum! 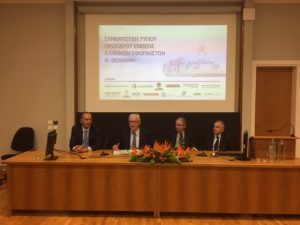 From the UGS president Press Conference

Welcome speeches by Fotis Kouvelis, the current minister of maritime and insular policy of Greece, Giannis Plakiotakis, former president and head of the maritime policy of Nea Dimokratia opposition party who represented the opposition leader Kyriakos Mitsotakis; Leonidas Demetriades-Evgenides, president of the Eugenides Foundation and IMO Ambassador in Greece… and a down to earth keynote speech by the UGS president Theodore El. Veniamis..

The main sessions were on : “2020: the Wind of change and worldwide shipping”; “2050: the Shipowners odyssey”; From the Clermont steamship to the ship intelligence”; and Geopolitics, Energy & Shipping: “New Energy Routes, New Business Environment, New Challenges in Shipping”. 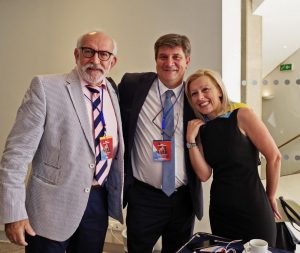 At the Antipollution stand with George Xiradakis and Sofia Falida

Good to see also some Greek and international companies having interesting stands with products and services. It was also be an event were we heard quite a lot of views from the audience on the  job front and the conditions prevailing in the job market of Greece vis-a-vis shipping jobs. We did had our say too on the Maritime Education and Training – the urgent need of a training ship but missed out due to time constrains to ask a question for the Global debt which now stands at US$ 250 trillion but hope we meet Christos Kissas and see what he says, as The Principals for Responsible Investment is one thing per his respective slides but the world debt is a Yellowstone… 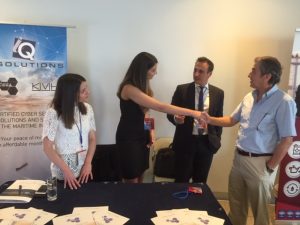 Will revert with the full write up soon!