The Roots of Greek Shipping in Crete 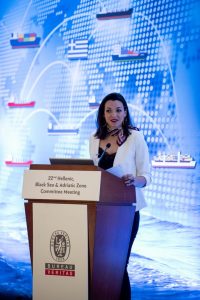 The Roots of Greek Shipping in Crete

Ladies and Gentlemen, here we are, in the island of Crete, where the roots of the Greek nation’s maritime history can be traced.

It all started here, 40 centuries ago.

In this corner of the planet, in the heart of the Eastern Mediterranean Sea, legend and historical artifacts are binded tight together and thus History is wearing the glowing cloak of the Ancient Greek Myths.

This is how the great historian Thucydides introduces us to the Minoan Nautical Power. 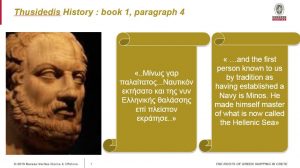 In the early 20th century, a British archaeologist who was passionate about the early civilizations that flourished in the Mediterranean Sea during the Bronze Age, Sir Arthur John Evans conducted extended excavations with his team that brought to light the ancient palace of Knossos, only a few kilometers away from Heraklion.

The Minoan Civilization expanded from 3000 until approximately 1400 BC.

The power of the Minoan Crete was a result of its wealth, and that wealth derived directly from the Sea.

“Pax Minoica” was a Rome before Rome. The Cretans cleared the Mediterranean Sea from the pirates, ensuring safe journeys that allowed free and uninterrupted trade with the islands of the Aegean, the Peloponnese, Asia Minor, South Italy, Sicily, South France, Cyprus, Palestine, Syria, and of course Egypt. 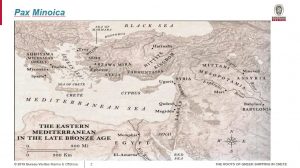 Its leading position in the wider area is proven by the fact that the Minoan cities had no walls or fortifications – their immense nautical power granted them enough security.

The Minoans exported wood, olive oil, wine, pottery and fine art jewelry while they imported the raw materials for their products: bronze from Cyprus, ivory from Syria, alabaster and papyrus from Egypt along with gold and silver.

Transit to and from Egypt and the Middle East was made from the ports of Crete Matala, Kommos and Ierapetra. Zakros was connected with the Eastern Aegean, while Malia and Amnissos of Knossos with the rest of the Aegean Sea.

In the bay of Agioi Theodoroi, not far from Knossos and Heraklion, an important archaeological discovery was made. All the findings show that at that point there was a Minoan shipyard and a major export port during the Minoan period. 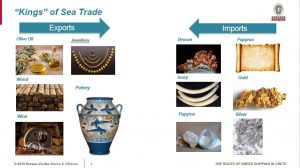 More specifically, during the underwater research conducted by the researcher Minas Tsikritsis and the geologist Stelios Manolioudis, there were found two large artificial graving docks that look like tanks indicating that this was a site for the construction of Minoan ships. The large ancient graving dock in the Northeastern side is 48 x 12 meters in size with a maximum water depth of about 1.8 meters. The size of the infrastructure itself shows that the shipyard had the capacity to build ships even 40-50 meters long and 10 meters wide.

The Minoan civilization vanished after the explosion of the volcano of Santorini around the 1400 BC.

35 centuries have passed and the mighty Greek fleet continues to sail the seas, carrying on the heritage of its Minoan ancestors.

As for Crete….
She is still the Grand Lady that continues to leave her footprint not only in Greece but in the entire world.

*From her presentation in Elounda, Crete during the  22nd annual meeting of the Hellenic, Black Sea and Adriatic zone committee of Bureau Veritas held on the 17th of May 2019