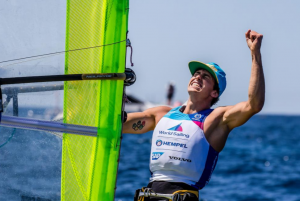 Camboni won the first gold medal of the day in the Men’s RS:X and was swiftly followed by Dutch racer, Lilian de Geus in the Women’s RS:X. Having led for most of the week, Italy’s Vittorio Bissaro and Maelle Frascari sealed the deal in the Nacra 17 and the 49er and 49erFX titles went to the way of Federico and Arturo Alonso (ESP) and Julie Bossard and Aude Compan (FRA). Nicolas Parlier (FRA) won the Open Kiteboarding Medal Race and with it, gold.

Today’s champions claim the 2019 Hempel World Cup Series titles and a further five will be crowned after Sunday’s Medal Races.

After strong wind conditions all week long, the final day played out in a variable 8-10 knot north westerly breeze.

Camboni led the Men’s RS:X fleet over the first three days of the event but on Friday, after an up and down day, he dropped to fourth. Gold was still within his reach though as just seven points separated the top five who all had a shot. Piotr Myszka led on 26 points followed by Daniele Benedetti (ITA) on 27, Pierre Le Coq (FRA) on 29, Camboni on 32 and Louis Giard (FRA) on 33.

Myszka started the race in gold medal position and got off to the best start. The fleet headed to the right side of the track and Spain’s Angel Granda-Roque (ESP) was able to advance. Camboni stuck closely to the Spaniard and found the right layline on the race track to push ahead and grab the lead as Myszka started to struggle.

Camboni clinched the lead on the final downwind and claimed the win, punching the air with celebratory relief as he knew he would win a medal.

The colour was to be decided as the points were tight and Camboni watched the fleet sail through. Giard followed in third with Benedetti coming through in fifth, Myszka in seventh and le Coq in ninth.

This handed Camboni the gold medal with his compatriot Benedetti picking up silver. Giard completed the podium on 39 points as Myszka missed out on a medal entirely by a single point.

“This means a lot,” expressed Camboni. “Last year I missed out on a medal and it’s so good to be at the top, especially at the final of the World Cup.

“I didn’t have a good start but I said okay, now I have to give everything. I knew I could do it. I really like these conditions and I just did the easy things right – good laylines and pumped a lot. I just believed and knew I could do it. I had some luck but I had a really good week and was hoping for a medal.”

The Hempel World Cup Series Final also acted as a qualification event for the Italian RS:X team for READY STEADY TOKYO – Sailing, the Olympic test event. Camboni’s victory will go a long way in him taking the single Italian spot but he is happy to share his success with a compatriot, “It’s nice to be at the top with Daniele. It will be a big fight to get to the Olympic Games and the one who will go with have a good chance at a medal.”

Lilian de Geus (NED) had a comfortable advantage heading into the Women’s RS:X Medal Race. She stayed out of trouble in a light wind final race, finishing third which confirmed gold.

“It feels really good, I’m really happy,” said de Geus. “Last year I just missed the gold after the Medal Race and now I’ve managed to do it. I was feeling good in Marseille this week. I was consistent and that was the key for me.”

Saskia Sills (GBR) clinched silver the hard way. The British racer looked to stick close to her nearest rival, Flavia Tartaglini (ITA), in the early part of the race but quickly found herself at the back of the fleet.

Tartaglini also struggled at the back of the fleet in eighth place but Stefania Elfutina separated the Italian and British racer. Silver looked like it was going to the Italian sailor but on the final downwind, Sills pushed hard and overtook Elfutina just before the finish which handed her silver. Tartaglini settled for bronze.

Vittorio Bissaro and Maelle Frascari (ITA) had a 16-point cushion over their nearest rivals John Gimson and Anna Burnet (GBR) before the Nacra 17 Medal Race. The Italians covered the British team to ensure there would be no surprises on the water and both teams raced in the middle of the pack.

Meanwhile, at the front of the fleet, Santiago Lange and Cecilia Carranza Saroli (ARG) pushed ahead with Ruggero Tita and Caterina Banti (ITA) hot on their heels.

As Bissaro and Frascari kept the British pair in the middle of the pack, Tita and Banti had an opportunity to move up into silver medal position. All they needed to do was push ahead of the Argentineans and win the race. They worked hard but could not quite manage it, settling for second in the race and with it, bronze.

Bissaro and Frascari finished fifth to claim gold and were followed by the British pair who took silver.

“It was a super week for us,” said Bissaro. “We loved the harsh conditions. We’d been waiting for that type of conditions all year. Today was quite different. We had to keep control of John and Anna from Great Britain. We did a super job at the start and kept them behind us and we did that through to the finish.”

As fleet racing concluded on Friday, Spain’s Federico and Arturo Alonso managed to wrap up gold in the 49er as they held an unassailable lead. Sailing with the pressure off in the Medal Race, they clinched a second to confirm their dominance.

There was no change behind them as Benjamin Bildstein and David Hussl (AUT) and Switzerland’s Sebastien Schneither and Lucien Cujean (SUI) completed the podium.

Julie Bossard and Aude Compan claimed the 49erFX gold in style, winning the final race to conclude an exceptional week of racing.

“We’ve worked all winter very hard,” said the pair immediately after racing. “We managed to keep it simple this week so we are happy to see the work of our winter has paid off.”

Poland’s Aleksandra Melzacka and Kinga Loboda were penalised ahead of racing for leaving the pitlane too early but that made no difference as they picked up silver.

There was a close fight for bronze between Austrian and Italian teams. Two points separated Laura Schöfegger and Anna Boustani (AUT) and Carlotta Omari and Matilda Distefano (ITA). In a straight shootout, the Austrians finished second, a place ahead of the Italians to win bronze.

Fleet racing concluded in the remaining fleets ahead of their Medal Races on Sunday 9 June.

Australia’s Mat Belcher and Will Ryan have all but confirmed gold in the Men’s 470. The Australians are 20-points clear of Jordi Xammar and Nicolás Rodriguez (ESP). Only a penalty during Sunday’s Medal Race could see them lose the gold medal and that is also dependent on the Spaniards winning the race.

Xammar and Rodriguez have an 11-point advantage over the third placed Hippolyte Machetti and Sidoine Dantes (FRA). However the French are just three points clear of Sweden’s Anton Dalhlberg and Fredrik Bergström and may be more concerned with defending their podium spot than attacking the Spaniards.

The race for gold in the Women’s 470 will go down to the wire in Sunday’s Medal Race. After two final fleet races, Just one point separate Hannah Mills and Eilidh McIntyre (GBR) and Camille Lecointre and Aloise Retornaz (FRA) and they have enough points over the rest of the fleet that whoever finishes ahead of the other on Sunday will win gold.

The Finn fleet completed three races on Saturday. Andy Maloney (NZL) maintained his consistency and will take an eight point lead over Josh Junior (NZL) into the Medal Race.

In the Laser, Giovanni Coccoluto (ITA) takes a two point lead into the Medal Race but anyone of the top six can claim gold.

It’s a bit more straight forward in the Laser Radial as Viktorija Andrulyte (LTU) holds a 19-point lead going into the Medal Race. Much like Belcher and Ryan in the Men’s 470, only a scoring penalty can see her lose gold. The race is on for the remaining podium positions as six points separate sailors from second to sixth.

Medal Races are scheduled to start at 12:00 local time on Sunday 9 June.