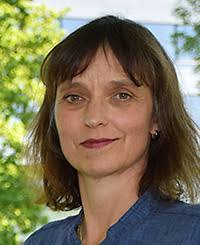 DNV GL customers in many industries are starting their decarbonization journey. Hydrogen has become one of the potential fuels for future transport needs. It is also seen as a solution in other industries’ decarbonization road maps.

As a transport fuel, hydrogen has already become a solution for road transport, powering fuel cells in cars, buses and trucks, and will soon generate electricity in ships. Work is under way to overcome some of the key challenges facing hydrogen as a fuel. DNV GL is involved in various projects and studies that are looking at ways to support the development and resolve some of the safety, regulatory and technical issues.

The potential of hydrogen as a clean fuel

With the push for decarbonization, there is growing interest in hydrogen as an energy carrier, whether as a fuel for residential heating, as an industrial energy source or as a fuel for truck, rail and marine use.

Gerd Petra Haugom, Principal Consultant, Environmental Advisory at DNV GL – Maritime, says that hydrogen as a fuel ticks many of the emission reduction boxes. “It is clean, producing no emissions except water vapour. However,” she points out, “more work is needed to ensure that its production is likewise clean and sustainable, and to build up a sustainable supply infrastructure.”

At the 2017 Davos meeting of the World Economic Forum, leading industrial CEOs formed the Hydrogen Council. Its objective is to promote serious investments in the hydrogen economy. This includes promoting the commercialization and development of hydrogen for fuel cells in particular, and as a significant part of the future energy mix in general. The Hydrogen Council expects hydrogen to cover 18 per cent of energy demand by 2050, equivalent to six Gt of CO2abatement annually. 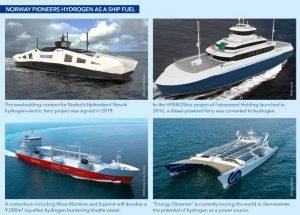 The Hydrogen Council and some governments, such as that of Norway, have committed to helping build a hydrogen supply infrastructure that will benefit road transport, industrial use, heating of homes and an integrated maritime supply chain. As a starting point, DNV GL assessed the status of the use of hydrogen in Norway. The final report for the Norwegian authorities provides a knowledge base for the development of a comprehensive strategy for research, technology development and use of hydrogen as an energy carrier in Norway. These efforts aim to prevent a chicken-and-egg scenario as seen with other alternative ship fuels.

There are very few liquefaction facilities at the moment. According to DNV GL’s report, about three per cent of world energy consumption is used to produce hydrogen, and more than 55 million tonnes of hydrogen are consumed annually, most of it by the chemical and petroleum industries. However, some hydrogen-fuel-cell-powered buses, trucks and trains are in use, and a supply chain is beginning to emerge for these vehicles. The increasing demand for hydrogen across industries for purposes such as heating and energy production is expected to boost hydrogen demand and might also contribute to the establishment of new hydrogen supply chains that increase the availability of both compressed and liquid hydrogen as a fuel.

By 2020, smaller vessels using the same technology should begin operating within the scope of projects DNV GL is actively involved in. Eventually, larger ships will depend on hydrogen, and the gas will be produced in larger quantities from renewable energy and converted into fuels for commercial aviation and shipping.

In its vision for the future, the Hydrogen Council estimates that a global hydrogen-powered fleet of 400 million cars, 15 to 20 million trucks and five million buses could be in operation by 2050, and that hydrogen could replace five per cent of the world’s aviation and shipping fuel by that year. In addition, ten per cent of global heat and power generation for households and the industrial sector might be covered by hydrogen.

Apart from serving as a fuel for fuel cells, hydrogen is of great interest as a means to store surplus energy from renewable sources, such as offshore wind farms.

A tricky substance to handle

Since hydrogen is highly flammable and challenging to contain due to the very small molecules, there are potential safety and regulatory challenges connected with its widespread use. “It is important to be aware of the specific properties of hydrogen, which are different from the properties of other fuels,” says Gerd Petra Haugom.

Furthermore, she continues, one of the key decisions regarding hydrogen as a fuel is the form in which it will be transported. “If you need to transport large volumes of hydrogen over some distance, it might – similarly to natural gas – make sense to use hydrogen pipelines, but for intermediate transport distances it can be more efficient to convert it into a cryogenic liquid at a temperature of –253 degrees, rather than transporting it as a compressed gas,” says Haugom.

Liquefied hydrogen takes less space than compressed gas. However, the liquefaction process can consume around 30 per cent of the energy content of the gas, and maintaining the low temperature requires energy as well. Therefore liquefaction is most feasible for large quantities of hydrogen. 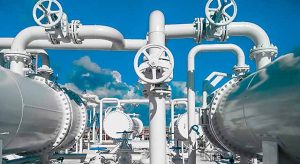 Because of the challenges associated with hydrogen gas, converting it into a less hazardous and more convenient form is considered by many experts to be preferable to liquefaction. Conversion to ammonia, synthetic methane or a liquid organic hydrogen carrier (LOHC) such as cycloalkanes or formic acid is being studied.

“All the emerging alternative fuels, such as LPG, LNG and biofuels, will need an infrastructure to be developed,” says Haugom. There are advantages and constraints associated with all alternative fuels. Due to the need both to build an infrastructure and to gain operational experience, Haugom believes hydrogen will initially be used mainly by smaller vessels and for vessels operating on fixed routes. As it is costly and potentially risky to be a first mover, the willingness to take such a step depends on the availability of funding sources to cover additional costs, or on government subsidies, as well as on the relative advantages of achieving compliance with stricter emission requirements in ports and heavily populated or environmentally sensitive areas. 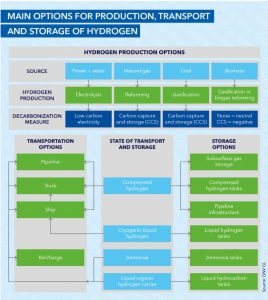 “It will be easy to start with ferries and other vessels which are on set routes where you will have limited infrastructure requirements,” says Haugom, pointing out that currently most of the hydrogen is produced from natural gas, which results in CO2 emissions, but that an increasing share of mix-in hydrogen from renewable sources is expected to become available.

Assuming a growing demand for hydrogen, there will also be a need to develop hydrogen bunker vessels.

Experience gained in hydrogen-fuelled road transport will likely be instrumental in developing larger industrial applications and building up a supply infrastructure for future maritime use. Of all alternative fuels, batteries are most efficient, but their weight and capacity limit their practical use. Hydrogen-based fuel cells could potentially overcome these constraints.

Haugom has worked on development projects for hydrogen-powered buses and public transport in Norway and Europe. “We still need to do risk assessments to make sure the risk levels are acceptable,” she says. The transfer technology for compressed hydrogen fuel has to be developed to ensure safe and fast bunkering since the volumes needed for ships are greater than for a truck or bus. She stresses: “To realize this potential, we need technology that can do this quickly and safely.”