The BDI (Baltic Dry Index) gained 45 points earlier on today following a good triple-digit success by the Capes’ 198 and now stands at 1,239 points, over and above the 1,200 threshold. On a weekly basis the BDI was up 154 points – from 1,085 last week 14/6… Geopolitics on War foot. John Faraclas’ daily and weekly recap!

The volatile Capes’ BCI gained 198 points and now reads 2,278; on a weekly basis the BCI gained 478 points – up from 1,800 last Friday… Be cautious though as it isn’t  the first time volatility hits the markets…

Eight points plus for the Supras’ BSI now standing at 751; on a weekly basis the Supras gained 35 points – up from 716..

Gains for the both Wets; the last published BDTI (Dirties)  and BCTI (Cleans) stood at 681 and 505 – five and seven points up respectively. Good “pickings” for the week too; the Dirties gained 24 and the Cleans 11 respectively – from 657 and 494. Good to see the Cleans above the 500 level!

The Migrants still top of the list in all the regions we cover over the last seven years – USA/Mexico border, The entire Med, Africa and Far East…suffer from the inability of the politicians, diplomats and their cronies to contain this despicable epidemic which brings sufferings to all and destroys social cohesion. ENOUGH! Add the NGO’s most of which are a hype and controversy and see what you get; fin, human rights are human rights but trafficking, espionage, blackmail and many more other issues are despicable and one day will backfire – remember this! What NATO, the European Union and others are afraid of and they don’t stop the Migrants coming …err been send over by Turkish PM Erdogan to the Greek Islands, Greek mainland and then on to Europe? Who is guarding the European Union’s frontiers? What’s the role of FRONTEX, eh! We reiterate the view that the only way to avoid all this despicable mess is to have a Naval Blockade, with a Mandate and Rules of Engagement for the entire Mediterranean and the Black Sea; end of the story!

Turkey continues to bully  and violate the legitimate Republic of Cyprus and Greece too, needless to say Syria! With Cyprus and Greece the issue of drilling in somebody else’s EEZ is beyond going to war. The EU must end the verbal communiques and saw a robust, a military so to speak intervention. This is the only language the Turks and their backers understand! Any objection?

Expect mess in the region with the two Turkish drill ships, the one already reaching the 3,000 meters in Cyprus’ EEZ, the other approaching – now approaching central Aegean Sea… and by Monday will be in a position enough to ignite a war in the region… The Greek side from Athens has send adequate warnings; the Cypriot one must organise the warrants of arresting all involved on board the Turkish drill ship from wherever they emanate from.  Watch this space.

As we have said and written numerous times the faulty line from Gib to Afghanistan and from the Caucuses to the Horn of Africa are heavily indebted with revolts, social upturns and other situations which might destabilize the entire region… Take the lawless Libya for example, Kosovo and Albania and the entire mess that can  happen. The Balkans always produce earthquakes and tsunamis, after all the tinderbox of Europe, eh!

Greece is in a pre-election fever and all wonder what the new government going to do for both the interior and the international affairs of a battered country…The Tsipras clan has spectacularly failed to deliver what it promised; the New Democracy is called upon to be sensible and pragmatic in case it wins an overwhelming majority, otherwise they will never ever be re-elected! As for KINAL, the must grow up!  The other parties must get their act together. We live in a new technological and ideological world so to speak!

Italy might cause mess in Europe with its financial affairs and Italy is not Greece, it’s a G7 group nation and an important player in Europe. Expect though setbacks from both sides as Brussels will not be able to handle the Italians…

The BREXIT saga continues and in the interim we have to see who wind the lucrative position as head of the Conservative Party and becoming automatically Prime Minister… Difficult times ahead as its what the winner will be able to deliver within and in Europe. Poor Mrs. May. We wholeheartedly stand by her!

The USA and Iran will continue their own fight and president Trump will bring hell there. He is determined one way or another to eliminate Iran for wanting in its own way to rule and destabilize the region. Nuclear weapons are a big issue… Wonder what the Chinese are up to… The dire straits, all of them, not just that of Hormuz dictate the way the Shipping Industry performs and Planet Ocean survives, although there are many oil and gas producing and exporting nations comparing with the Gulf War of the 80’s… The war of the Tankers then and now will be different… CAUTION though to avoid the spill over the warmongers wish!! Obviously in our philosophy: War is Father of All; if you don’t destroy you cannot rebuilt; this is the pitiful message from history…

Meantime the people of Hong Kong gave a strong message to Beijing; their demos paid off – expect developments!

Trouble might appear in Ethiopia where things aren’t good at all! Caution!

Venezuela still in tatters; another area of ultra CAUTION! 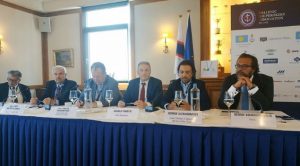 What a biennial event that was Pireas 2019 organised by the HSA – Hellenic Shipbrokers Association last Wednesday and Thursday? The 7th Global Symposium of Maritime Executives surpassed every expectation booth for its Conference deliberations at the iconic Yacht Club of Greece  as well as for the Gala dinner at the Metropolitan Expo just off the Eleftherios Venizelos Athens Airport at Spata. Who wasn’t there! 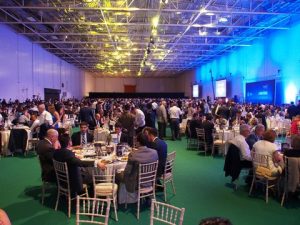 From the gala dinner at the METROPOLIS

Many congratulations to all as, from what we have been advised on the themes presented and discussed, as well as the Q&A time, both were unique,  food for thought to all in this messy Shipping and Trade situation we experience at a period of an unprecedented recession all over Planet Ocean, with Environmental Regulations reaching a climax and geopolitics in full jeopardy!

We hope that this Conference sets the basis for further improvements in the industry as Shipbroking is the A to Z and beyont! 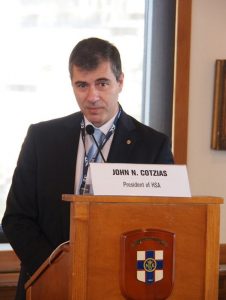 John N. Cotzias and his team at the HSA as well as its secretariat there did the trick! See you in 2021!

On another tone and note two conference events next week in Greece attract the attention of hundreds of delegates:

The IAME 2019 for the 25th to the 28th of June at AUEB (Athens University for Economics and Business), The Aikaterini Laskaridis Foundation, The Royal Olympic Hotel and for the finale reception on board the historic “Hellas Liberty” will sure has a lot to offer… Will revert with a full write-up.

On Tuesday also, and as we have already advised you all,  the 9th Annual Capital Link CSR Forum takes place at the Athens Hilton under the theme “Investment, Extroversion & Social Responsibility, Pillars for sustainable development” followed by  the “2019 Capital Link Leaderships Awards”…

Remind you also of the HESGB (Hellenic Engineers Society of Great Britain) annual BBQ at the Trailfinders Sports Club on Sunday the 7th of July… Interested viewers can contact Evan Zaranis (evan.zaranis@hotmail.co.uk) or HESGB Secretary Patty Apostolopoulou (patty.apostolopoulou@lr.org), as early as possible to avoid disappointment!

Have a nice evening and a nice weekend and enjoy the Summer Solstice wherever you are on Planet Ocean. Mind, as always, the Pirates, Terrorists, Criminals and Business Hooligans!