The BDI (Baltic Dry Index) gained 22 points and we hope it maintains this pace given that we approach the mid-summer period when normally rates are down. Geopolitics continue to be dangerously perplexed. John Faraclas brief daily recap:

The Panamaxes’ BPI had a good performance clinching 39 points and now stands at 1,150 points…

The Supras were up nine points with the BSI reading 765…

Stagnation for the Handies with the BHSI remaining at 442 points.

Mixed feelings for the Wets; the last published BDTI (Dirties) and BCTI (Cleans) stood at 678 – minis one and 543 plus 33 points!

The Geopolitical field is more than dangerously perplexed:

The MIGRANTS still on top of the …“agenda” with Mexico sending troops to its borders with USA… In the Continent and particularly in the Med there is a surge yet again given the better weather conditions… Turkish PM said he will send back to Syria one million… let’s see… All in all the MIGRANTS issue continues to be a despicable issue for the World we live in. Shame to all Politicians and diplomats who fail to do the right thing being influenced by wrong people… The damage to children in incalculable…

Turkey continue to violate to all intents and purposes the international law bullying all of its neighbours and in particular, Syria, Cyprus and Greece despite the strong verbal communique by the European Union which in our humble view MUST saw ZERO TOLERANCE with president Erdogan. Losing Istanbul mayoral elections sends a strong message and let’s see how he digests same. Caution!

Greece next door will have a new government on the 7th of July and let’s hope one with an overwhelming majority!

In the UK the attention focuses on the Conservative Party’s leadership race with the two – Jeremy Hunt and Boris Johnson doing their best to win, but what this nation needs is how they will win the BREXIT, a BREXIT favourable for the entire United Kingdom!

All in all the EU is in total disarray; any objection?

The USA and Iran might surprise us all; ULTRA CAUTION should be observed! Russians seem to watch on the sidelines… China too… 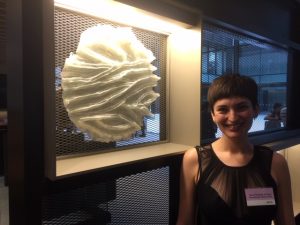 Kira Phoenix K’inan and her Collateral Beauty in white

On another note and tone it was an absolute joy to see all the fantastic artwork on display at Ashurst Emerging Artist Award and Kira Phoenix K’inan glass piece, Collateral Beauty in White, is one of the 30 artworks to be shortlisted! Congratulations Kira.

“The Ashurst Emerging Artist Prize 2019 will be awarded to artists that show significant potential, interesting ideas, a relevant message and skillful execution. We understand that talented artists exist in many forms, so endeavour to appeal to emerging artists of all ages and career paths, whether student, graduate, full-time or part-time, and from any country.

Ashurst’s aim in sponsoring the Emerging Artist Prize and Emerging Artist Programme is to find, build and support the careers of talented international emerging artists and get their art seen by a wider audience.”

To read more about the award – https://www.artprize.co.uk