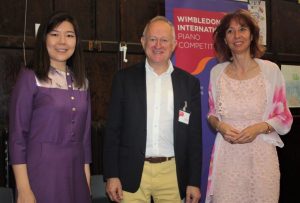 Praise on a major scale has been bestowed on the Wimbledon International Piano Competition following its 2019 airing, its second annual edition.

The 85 performers charmed and dazzled adjudicators, audiences and visiting dignitaries including two government ministers who lauded the competition’s contribution to musical life and learning. 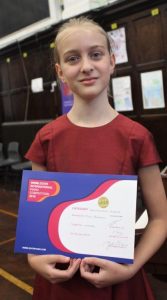 Nine of the contestants were awarded full marks for their technique and approach to their demonstration pieces, and many others were close behind. The winners’ concert on June 23 attracted a rapt gathering of more than 200 people who repeatedly broke into vigorous applause.

“I am over the moon with the way the event has unfolded. It has grown in scope even since last year’s outstanding inauguration. We have had a magnificent level of involvement from people here in Wimbledon and far beyond,” enthused founder Sally Wave, who is at the heart of the story. Dr Wave said: “The level of support from the UK and from overseas has stepped up noticeably, and it has been exciting to witness the great potential of our young piano students.”

Participants with the highest number of marks were presented with crystal awards. Of the nine who scored the maximum Dr Wave said: “We were delighted when in the 2018 competition three entrants were given a 100% rating, but this year – it was ‘wow’ for so much of the time.” 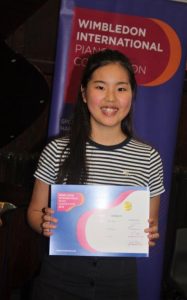 Sally Wave created the “impossible,” as some had termed her project two years ago, of establishing a new piano competition on solid foundations and with a standing as high as many based in other London boroughs. This was exactly the aim – to set up an event that would bring new talents to a wide audience.

Among messages of congratulations to the organisers, a parent of one of the most successful competitors said that they “very much enjoyed the competition and the concerts – what a welcoming and warm environment!” 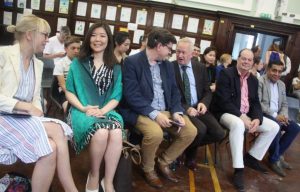 Throughout the first day of the competition, hopefuls stepped forward to a Petrof grand to weave a bright tapestry of sound, reflected in a burst of afternoon sunshine. They were served by an excellent piano acoustic, and the audience enjoyed a comfortable view from a semi-circular seating arrangement in the hall of the high-achieving, 630-pupil Wimbledon Chase Primary School, which is housed in a neo-Georgian building fronting extensive grounds. 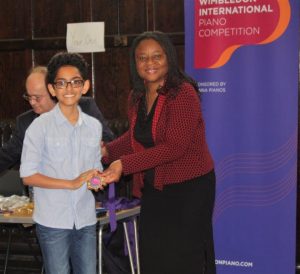 Opening the proceedings were nine students of Grade One of the Associated Board of the Royal Schools of Music (ABRSM). Even in this beginners’ grade there is a demanding syllabus:  exams call for three pieces; study of scales C, G, D, and F majors; A and D minors and broken chords; sight-reading; and aural tests – the exam board says that “listening lies at the heart of all good music-making.” The pieces ranged from a transcription of La Donna è Mobile from Rigoletto to Asian Tiger Prowl by contemporary composer Rob Hall.

At Grade 2 level, 14 competitors vied for awards. One of the most atmospheric pieces was Lazy Bear by Lithuanian-born Vitalij Neugasimov with its dark chords seeking to express the qualities of the beast. This was played by Sofia Hristova. Max Noah Midzic of London gave a medal-winning rendering of a transcription of Holst’s Jupiter, while Conor Barr offered a playful arabesque No 2 from Op 100 by Johann Friedrich Burgmüller (1806-1874) and Dusty Blue by Belfast-composer and teacher June Armstrong. 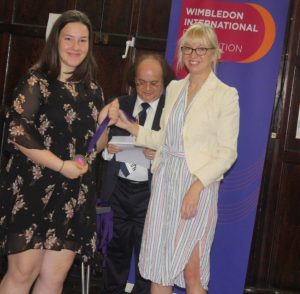 Grade 3 was another popular class, with 12 entries, each participant demonstrating remarkable versatility. Highlights of Grade 4 included Renee Petrova’s rendering of the popular arietta from Grieg’s Lyric Pieces, and an extract from Moments at the Piano by Czech composer Luboš Sluka; and Andrew Zheng playing sonatina in A minor by Georg Benda and The Reef, from Southern Seas by Walter Carroll.

In the category of free choice for children under 12, the nine entries prompted adjudicator Ken Virgin to exclaim: “The standard is very high today!” Zornitsa Denkova from Bulgaria won gold by showing her mastery of four pieces: JS Bach’s C minor fugue in two voices; the allegro con brio first movement of Josef Haydn’s sonata in D minor Hob. XVI; K Tabakov’s A Play, from Children’s Paintings; and Alexander Tekeliev’s The Squirrel, from Children’s pieces for piano. Naomi Yiqing Zhao was among those who impressed, as she played Chopin’s waltz in D flat major and Haydn’s sonata in B Hob XVI. 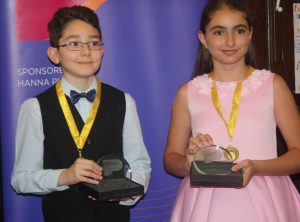 The section for free choice by children aged 12 to 14 drew further praise, compere Fadi Hanna remarking: “The quality is beyond belief in this age category.” Two gold medallists were declared: Vivien Bachmann of Switzerland, and Cei Kim of the UK. Vivien presented with crystalline elegance Chopin’s nocturne in F minor and notturno in C major from Lyric Pieces by Edvard Grieg. Both girls displayed supreme confidence and conveyed a level of emotion that would be associated with some of the best mature professionals.  Their sense of timing was impeccable, and the yearning tones touched people’s hearts.

In the 12 to 14 class, there was a treat with the ambitious choice by Ann Claire Herr of the fast-fingered O Polichinelo (Punch) by Villa Lobos – Arthur Rubinstein had played this often as an encore. Played presto, the piece presents challenges with accented notes and a changing time signature. 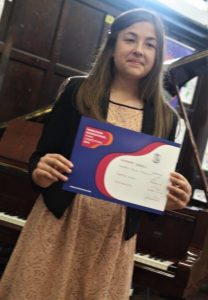 Ann Claire went on to play the scherzo from Solfeggio in C minor by Carl Philipp Emmanuel Bach, and Rustles of Spring by Christian Sinding. Still in this stand-out class, Tomas Simeonov of Bulgaria contrasted a Chopin waltz with a presto from Haydn’s sonata in E minor Hob XVI/34.

Max Bogdanovic of the UK secured gold in Grade 6 with two fascinating pieces, Scriabin’s prelude in E major Op 11, and a Romanian folk dance by Bartok. Preslava Vladimirova was awarded silver for her captivating interpretations of Dussek’s allegro from sonatina in E flat Op 19 no 6 and The Little Ballerina by Norwegian composer Christian Hartmann (1910–1985).

Grade 7 was won by the accomplished Reis Fernandes, playing the gentle Rosemary’s Waltz by Richard Rodney Bennett, and JS Bach’s Giga from Partita no 1 in B flat major. 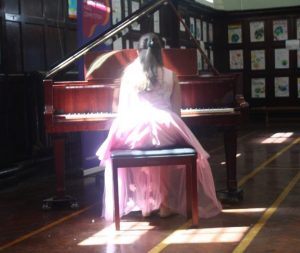 The adult category was dominated by Eden Howard and Takuto Arao; the former with a Rachmaninov prelude and Debussy’s Poissons d’Or, the latter with Erotik by Grieg and the Gershwin prelude.There was a fine performance by Sarah Guthrie of Mozart’s rondo in F and Chopin’s waltz in A flat Op 69 no 1.

The modest Vivien Bachmann, who has just turned 12 and lives in Basel, has already won several competitions. She began learning piano at the age of four and “I just started to do competitions in the neighbourhood.” She entered her first competition “at the age of eight or nine.” Her style has been likened to that of the great Rubinstein, and she has followed the Polish-American maestro into Chopin, Rachmaninov and Bach.

Fadi Hanna, founder of the Wimbledon piano business Hanna Pianos which was a leading sponsor of the competition, told the participants at the outset: “By coming here you are all winners,” advising anyone suffering from nerves to “relax and be happy.” 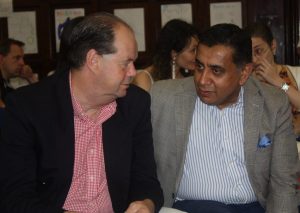 Stephen Hammond, MP for Wimbledon, confessed himself pleasantly surprised to find that the 2019 venture had turned out to be even better than the previous year’s well organised event. Mr Hammond, who has been MP for Wimbledon since 2005 and is minister of state in the Department of Health and Social Care, distributed prizes for the first three grades.

Lord Ahmad of Wimbledon, minister of state at the Foreign and Commonwealth Office, professed: “I have always loved the piano” and said what a pleasure it was at the end of a day to turn off the email and listen to good music. “The language of music transcends cultural values,” he said, before presenting crystal awards to competitors with the maximum points. 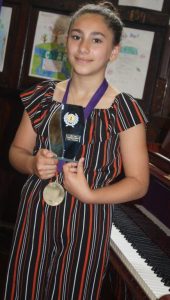 Councillor Caroline Cooper-Marbiah, Merton borough cabinet member for commerce, leisure and culture, recalled how finding photos at home from the time her children were studying piano brought back wonderful family memories. She presented the awards relating to Grades 7, 8 and the adult category.

Councillor Eleanor Stringer of Merton borough’s Abbey ward congratulated the winners in Grades 4, 5 and 6 and presented them with medals.

Councillor Nigel Benbow, also of Abbey ward, praised all involved with the competition and presented the medals for the free choice categories for the under-12s, and the 12-14s.

A dedicated special prize for the best performance of a piece by Clara Schumann was presented by Sally Wave to Ann Claire Herr. The prize was in homage to the 200th anniversary of the birth of the Romantic-era child prodigy, virtuoso and composer. 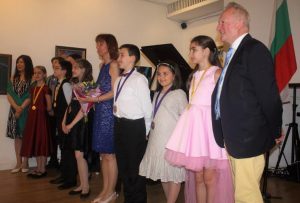 At the Bulgarian embassy concert.

Sally Wave summed up the prevailing sentiment: “You know that even though written by geniuses, music is for all of us, and touches everyone who loves it. In a competition, it is praiseworthy to achieve the gold and we are very proud of our winners. But every single participant has achieved their best, as we have heard over the last two days.

“Mistakes do happen, so forgive yourself and keep practising, and you will return to the piece and do it better. If you have deep in your heart the love of music, that is what matters. Keep the flame burning and music will give you wings to fly and the strength to overcome difficulties.” 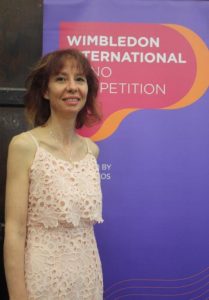 After the ceremonies, several of the winners left for a concert at the Bulgarian Cultural Institute, part of the Bulgarian Embassy in Kensington. This supplementary concert in a prestigious diplomatic venue was a first for the Wimbledon competition.

Planning is already under way for the June 2020 Wimbledon International Piano Competition. Among new features will be a special prize for the best performance of a work by Ludwig van Beethoven, the 250th anniversary of whose birth will be widely celebrated in the music world.

More gains for the BDI despite perplexed Geopolitics

Thank you, Mr Brewer, for the brilliant article! I am sure everyone is very pleased with it!