SAGA sails into Kent with over £600m investment 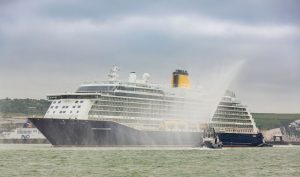 SAGA sails into Kent with over £600m investment

Kent-based Saga today (Friday, 28th June) sails into its future, as the first of two bespoke new build ‘boutique’ cruise ships, Spirit of Discovery, arrives at her home port of Dover for the first time.  Sailing past the iconic White Cliffs and into Dover’s recently developed Western Docks, Spirit of Discovery’s British arrival marks the start of a new chapter for cruising in the UK.

With HRH The Duchess of Cornwall as her ‘Godmother’, Spirit of Discovery’s Naming Ceremony on the 5th July will mark the start of a significant new era for the Saga Cruise division, which is the only remaining major British independent,  British registered, cruise company.  Best Small Cruise Company winner at the British Travel Awards 2019, Saga’s Spirit of Discovery will be the only ship built and delivered exclusively for the British market this year, and  the company is determined to build on its success in this steadily growing and lucrative cruise market.

Spirit of Discovery’s sister ship, Spirit of Adventure is due to arrive in summer 2020, marking the realisation of a £600 million+ investment in both ships. This will spearhead Saga’s role not only as the British company creating and driving the distinctly British boutique cruise market, but also as the champions of discovery based travel for this  market.

To create the proposition, Saga commissioned extensive research with both current and potential future customers, and the overriding feedback was that they didn’t want the much larger cruise ships that competitors are now creating. Many cruise customers want a refined, luxury experience, a return to an original ‘romance of travel’ and cruise experience, but with a modern twist, this is what Saga terms, Boutique Cruising.  They also want a distinctly British experience, and to be challenged both on board and ashore as they sail around the globe.

As a result, the architectural and interior design for the 999 passenger, 523 crew, Spirit of Discovery has been created by London-based agency SMC who have taken the ultimate in London-based boutique hotels as their influence. Key features of the new ship include a wraparound promenade deck (removed from nearly all new design ships), an above water spa, ‘The Club’ – a dining and music venue in collaboration with Jools Holland, a private balcony for every cabin and, uniquely, 20% of cabins have been luxuriously designed for single occupancy (typically ships have only 5% and often these cabins do not have a view.)

A major commitment has been made to British contemporary art with almost 400 original pieces of British art amongst the  over 1,000 total artworks,  all of which have been created by British based artists. Names include established artists such as Helen Amy Murray, Evelyn Binns and David Harber as well as some really exciting and unique up and coming talent.

A host of independent British suppliers including Hush Heath wine producers of Kent,  Shepherd Neame, Britain’s oldest Brewery based in Faversham, Kent, Donald Russell British Lamb and River Test Trout and Salmon from the Severn & Wye smokery, have been confirmed as providers for the pioneering boutique cruise vessel.  In addition 60% of the cheeses onboard are from British farms from the coast of Devon to the tip of Scotland.

Saga Travel CEO Robin Shaw says, “We have unashamedly focused on the fact we are a British cruise line. We have designed the new ships with a focus on British contemporary design classics, with the vision of creating Britain’s first boutique hotel at sea. But these ‘hotels’ are able to take Saga guests to interesting and exciting destinations around the world. Both ships will have a bold and adventurous style that’s a testament to high-quality design and the best of British innovation and flair.”

Robin continues, “With our classic, contemporary British design, we have absolutely hit the mark with boutique cruising. The design is not what you get with a cookie-cutter approach; it is meant to be individual. While we are ecstatic with the design of Spirit of Discovery, we have already taken the decision to give our next ship, Spirit of Adventure, a very different boutique look and feel.   Our aim is to set the highest standards for quality and service for any cruise line operating out of the UK.”

Saga cruises are only marketed in the UK and are designed for the British market.  They have an enviable repeat customer rate and opportunities are significant given that this market is one of the most affluent and influential in the UK. In 2018, the UK’s over 50s totalled 24.9m,  representing close to 40% of the entire UK population, as well as holding 75% of the UK’s household wealth.  The growth of this crucial demographic is expected to continue and is predicted to  be c.30m by 2044. The pursuit of a more active lifestyle continues to be a key trend with  54% of the UK’s total expenditure on leisure, culture, food, recreation and health made by this demographic.

With the launch of Spirit of Discovery, and as part of the ‘boutique’ experience, guests can also enjoy Saga’s new concierge service ‘Explore Ashore’.  Each voyage will have an on-board team of experts who are knowledgeable about every port and will be ready to organise individual and small group excursions and activities so that guests can experience exactly what they wish to in each port.

Robin Shaw  says, “There is an outdated perception that the older generation shies away from doing anything new – that is not the case. The conversations I have with our existing and potential future customers, alongside our ongoing research, gives us all the strategic pointers we need. This demographic wants adventure, and to discover and see the world in new and individual ways.”

When fully in service each ship will deliver around £40m EBITDA per annum.  This will mark a step change in the financial performance of the overall travel division within Saga.”