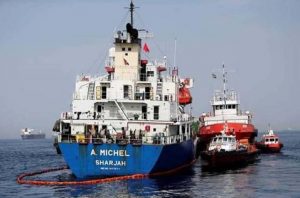 On 12 May 2019, the Bunkering Tanker “A. MICHEL” (GRT 4,346 – DWT 6,711), laden with 1660 tonnes IFO 380 and 950 tonnes MGO, whilst anchored at Fujairah B anchorage, UAE, suffered an underwater explosion (reported as sabotage) by way of the engine room, causing an external gaping hole on her starboard side. This resulted in the vessel’s listing due to flooding and total black out.

Another three tankers were affected by similar explosions, namely the Crude Oil Tanker “AMJAD”, the Crude Oil Tanker “AL MARZOQAH” and the Product Tanker “MIRAJ”, according to officials in the UAE.
Tsavliris Salvage was engaged to provide salvage assistance to the “A. MICHEL”. On 14 May a salvage team was mobilised from Greece and boarded the casualty on 15 May. Messrs. Fairdeal Group Management & Atlantis Marine Services were appointed as salvors’ subcontractors and the tugs “ATLANTIS I” and “FAIR BEE” were engaged to assist the casualty.
Underwater inspections were carried out, along with skimming of the engine room. Electricity was provided with portable generators and the FiFi system was activated. Calculation studies for cargo discharging and for temporary repairs were prepared and submitted by Tsavliris to all parties concerned.
On 25 May 2019, the salvage operation was successfully completed. 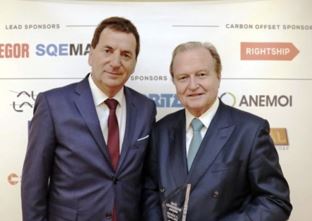 On 12 March 2019, George Tsavliris received the 2019 GREEN4SEA Leadership Award at a prestigious award ceremony held at the Yacht Club of Greece in Piraeus.
Mr Tsavliris, Chairman of CYMEPA for over two decades, received the award for his leadership role within CYMEPA and other national and international Associations. The award was presented by Capt. Dimitris Mattheou, CEO of Arcadia Shipmanagement who said that “the supreme quality for leadership is integrity, honesty and strong moral principles; moral uprightness and George (Tsavliris) is generously gifted with all these virtues”.
The GREEN4SEA Leadership Award is a distinction awarded to an individual that provided industry leadership and / or contributed towards Greener and Sustainable Shipping. 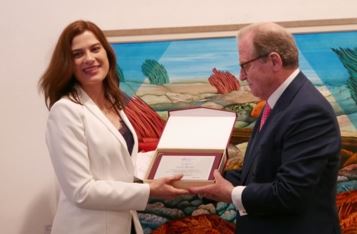 On 5 May 2019, the Tsavliris Cultural Foundation, organised an Art Exhibition, themed “Sea & Shipping” at the Morfi Gallery in Limassol, Cyprus.

The Deputy Minister of Shipping, Ms. Natasa Pilides, opened the ceremony and inspired with her words for the future of the shipping industry. She underlined the importance of both synergies and education and expressed her pleasure as the proceeds of the Exhibition will be used to fund a scholarship for a Master’s degree (MSc) in “Shipping and Finance”, at the Cyprus University of Technology, in Limassol.

The aim of the Tsavliris Cultural Foundation is to promote the spiritual and artistic creativity of people who contribute to the questioning and quest for a better society such as artists, intellectuals, thinkers on civilisation, society, education and culture.