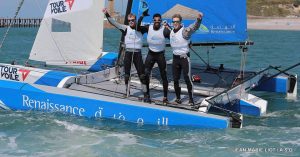 Stevie Morrison and the Oman Sail crew of Renaissance Services became the first team on the 2019 Tour Voile to win two Finals when they took every chance they could and triumphed in the Act 2 Fécamp Stadium Final. Their hard earned second win comes after the disappointment of having to retire from yesterday’s 40-mile coastal race with rudder damage.

But rather than serve as a salve for yesterday’s resultant slide down the General Classification leaderboard, double Olympian Morrison admitted that today’s excellent win, their second after Saturday’s triumph in Dunkirk did not compensate for yesterday.

“If anything it makes it worse.” Morrison declared, “But it happened and today showed what a great team spirit we have on the Renaissance Services crew. We can put that away and come back today and fight really hard. Today it was really, really hard just to make the Final. But in the Final I think we did a really nice job.”

Speaking after crossing the line Morrison grinned “We made a very nice move on the first downwind. There was a swimming zone on the left hand side and we judged our layline for that very nicely, that got us a little closer to the beach than the other guys. That gave us a chance and we took it. After that we were in a very powerful position. It maybe helped that after yesterday Poujoulat and Beijaflore were maybe were not so focused on us because we have really fallen down the General Classification, who knows? Maybe we just sailed very well!”

Renaissance Services, Morrison, Quentin Ponroy and Abdul Rhaman Al Mashari, pushed hard in the qualifying and lead their group in the early stages, going through to the eight-team final second of the four from their flight.

While the course, running parallel to Fécamp’s stony beach, was fantastic for the spectators as two of the sets of buoys were just a handful of metres from the shore. But the wind was lightest, flicky and shifty closest to the shore while there was more, positive tidal current offshore, running against the Easterly breeze.

Renaissance Services did not make the best of starts, gambling with being at the windward end of the start line. During a spell of lighter air the more open, slower angle to the first turn did not serve them well.

But on the first downwind they managed to get further inshore for their final approach to the leeward gate and passed both Cheminées Poujoulat and general classification leaders Team Beijaflore. From there they were uncatchable.

“I think we did not come into the Tour so full of confidence and so to have won two you think where you could be. Our option from here is to chip away. But there is no one in this fleet who stands out, there is a very good standard and you just need to keep plugging away.” Morrison remarked

“Our debrief last night was about missing something technical. But we had done ten miles with the rudder on the boat and it was OK but when we got in the big waves it just ripped off the boat. Winning sailing events is not easy and for sure we have made it very hard for ourselves.”

Follin, a past member of the Team France Jeune America’s Cup team summed up their second, “It was a super nice day, we played our game without taking any risks. And we just ramped up our level when it was necessary, for the final. We were opportunistic, we found a hole on the line and suddenly we won the start. Stevie (Morrison) is doing a great race, he passed us all at the first turn. We are happy to finish second. Overall we have made a very good start to the Tour, qualified for all finals. We will keep a cool head and rest well for tomorrow’s Coastal Raid which will be complicated because there will be no wind and a lot of current in the bay of Mont Saint-Michel. It will be very nice but it will be hot. »