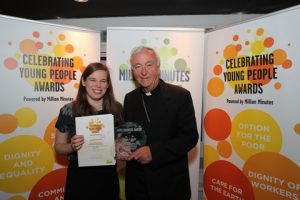 Hannah and the Cardinal

A 24-year-old seafarers’ charity volunteer has won an award celebrating the contribution of young people to social action.

Hannah Forrest who lives in Plymouth, was presented the Pope Francis Award by Cardinal Vincent Nichols, head of the Catholic Church in England and Wales in a ceremony on July 3.

Hannah is a volunteer ship visitor for seafarers’ charity Stella Maris (Apostleship of the Sea) in Plymouth. She regularly goes on board ships in port and her work has been vital to the seafarers arriving on those ships.

She has also raised awareness of seafarers in her parish, encouraging others to become ship visitors to ensure that many more seafarers receive a warm and friendly welcome while they carry out their vital work away from home in foreign lands.

She brings with her an enthusiasm and freshness on each visit and relates easily to the seafarers putting them at their ease and asking about their lives. 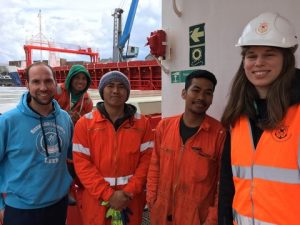 Hannah on one of her ship visits in Plymouth meeting some seafarers.

The Celebrating Young People Awards – now in its fourth year – was organised by Million Minutes.

Hannah is a recent psychology graduate from the University of Plymouth and has been ship visiting with Stella Maris (Apostleship of the Sea) for 11 months.

“I’ve always been interested in the maritime world as my dad is a Naval architect. It only seemed natural that I made enquiries about volunteering with Stella Maris (Apostleship of the Sea) in Plymouth,” Hannah says.

“Seafarers do such vital work and contribute so much to the world’s economy; however, they live a semi-nomadic life that is hidden from view. That’s why it’s so important that they feel welcome and know they have friends in ports whom they trust and who will support them in good and bad times,” Hannah says.

“I encourage other young people who are interested in learning more about volunteering to contact Apostleship of the Sea,” she added.

Recognize Efforts to Save Our Seas!