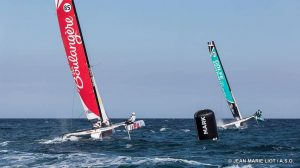 Port Barcarès delivered some superb breeze and brought youth and female teams to the fore in the Coastal Raid of Act 5. After almost four hours on the water, the youth team of Golfe du Morbihan Breizh Cola (Solune Robert, Louis Flament and Charles Dorange) claimed their first victory of the Tour Voile, just seconds ahead of the all-female team of La Boulangère (Mathilde Géron, Louise Acker and Amélie Riou) – who also celebrated their best result to date. Overall leaders Team Beijaflore, skippered by Valentin Bellet and Guillaume Pirouelle, highlighted their consistency with their fifth third-place finish and retain their position at the top of the general classification.

Today’s 40-mile course took the crews on a very long beat along the coast, almost to the border with Spain, before returning to Port Barcarès with a breeze that had filled in considerably, gusting at over 20 knots, and shifted from 90° to 160°.

Illustrating the ever-important skill of choosing the favoured end of the starting line, La Boulangère had a great start on the left side of the course, while classification leaders such as Cheminées Poujoulat and Réseau IXIO – Toulon Provence Méditerranée had to climb their way back up the fleet after choosing the pin end of the line. Golfe du Morbihan Breizh Cola started well towards the middle of the fleet and by the first weather mark had managed to inch ahead of La Boulangère, a position they would hold – only just – for the rest of the race. The two teams battled at the front of the fleet for the entire afternoon and crossed the finish line only a few boat lengths apart.

Speaking about today’s result, which was a great comeback from a rough collision on Sunday in Les Sables d’Olonne, Golfe du Morbihan Breizh Cola’s skipper Solune Robert commented: “After the difficulties we have had it was great to come back with this win. We had a very long beat right down to the foot of the Pyrenees. It was a tough day but we kept our nerve and managed to stay ahead. Towards the line things got very close and in the end we had a great battle with the girls of La Boulangère.”

Mathilde Géron (La Boulangère): We’re really happy! We didn’t manage to get past Golfe du Morbihan Breizh Cola in the end. We changed the configuration of the team a little for this Raid and it paid off. We’ve never lost faith, we just missed out on a few successes, particularly in Les Sables d’Olonne. We are aiming for the Top 10 and even higher if possible. So we need to have good days from now on!”

As far as the overall classifications are concerned, Team Beijaflore finished sufficiently ahead of their closest rivals Cheminées Puojoulat (who with an eighth place today registered their poorest performance to date) to extend their lead from two to seven points, with Team Reseau IXIO – Toulon Provence Méditerranée (ninth today) still sitting behind them in third. Today’s performance by Golfe du Morbihan Breizh Cola has allowed them to squeeze into fourth place, pushing Oman’s Renaissance Services, skippered by Stevie Morrison, back to fifth overall. Still just 16 points separate the top three boats, so any slip-up resulting in failure to qualify for the final of tomorrow’s Nautical Stadium leg could have serious consequences.

Golfe du Morbihan has also considerably shortened the gap between them and the leader of the Youth classification, Cheminées Poujoulat. Meanwhile today’s second place finish for the ladies of La Boulangère, skippered by former 470 European Champion Mathilde Géron, has allowed them to extend their lead to just shy of 50 points in the Mixed classification, ahead of Helvetia Purple by Normandy Elite Team.

The starting signal for tomorrow’s Nautical Stadium racing is scheduled for 11.30 a.m. 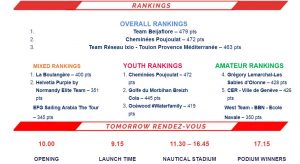