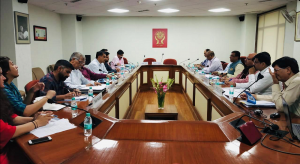 As first reported by The Times of India and copied to Human Rights at Sea prior to publishing, NHRC Delhi members led by Dr Dyneshwar M Mulay Secretary General Sh Jaideep Govind, officials from Ministry of Shipping and Ministry of External Affairs, delegates from FINS, and civil society representatives held discussions over the topic of ‘Human Rights at Sea of Indian Seafarers’.

NHRC Member Dr Mulay remarked that human rights abuses of seafarers are on the rise and it’s a serious matter of concern for both NHRC and the Indian Government.

The evidence of abuses at sea are numerous with the case of 23 detained Indian seafarers of the MT SG Pegasus by the Indonesian Navy for over five months, the recent closure of eight maritime training institutes by the Director General Shipping for issues such as fraudulently admitting students to unapproved courses and issuing course certificates without attendance, exposure of case of the Panamanian flagged MV Nautical Global XVI anchored 19 nautical miles off Deendayal Port in western India for two-and-a-half years after arrest following a Gujarat High Court order in may 2017; and the arrest and detention of the Panamanian flagged vessel Sea Horizon by Ghanaian naval authorities due to a contractual dispute between Nigerian companies including an assessed five Indian Seafarers.

Human Rights at Sea has been provided with a summary of examples of human rights cases, including abuses towards Indian seafarers current as of 12th July, including:

The Secretary General concluded the 8th July meeting with Dr. Dyneshwar Mulay submitting that the NHRC should continue to discuss the issue through an informal working group headed by the Registrar of the NHRC.

Having been party to and reviewed the submission paperwork, the charity is pleased to hear that FINS will now proceed with a project on Human Rights at Sea to review the issue, its scope, and deliver a report covering issues such as slavery, trafficking, illegal employment, recruitment processes, and currently available and future remedies.

Human Rights at Sea Founder, David Hammond, commented that: “As a founding member of the IMO, Indian authorities have rapidly taken on the emerging human rights at sea topic and are now pro-actively developing the subject-matter at State-level to start to comprehensively address human rights abuses within the Indian maritime sector. As highlighted by the charity in February in Mumbai, this State-level leadership and associated policy development now needs to be further replicated around the world to be truly effective.”