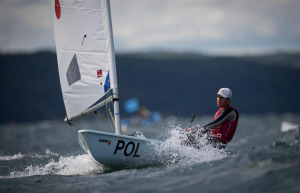 Local sailor Tytus Butowski is leading the hopes of the home nation at the Hempel Youth Sailing World Championships in Gdynia, Poland, sitting atop of the Boy’s Laser Radial fleet.

Butowski is a resident of Gdynia and grew up on the waters of the city, learning their intricacies and how the wind dances around Gdansk Bay. After three days of competition in the 57-boat Laser Radial fleet, he tops the leaderboard on 23 points, three clear of 2018 silver medallist Juan Cardozo (ARG).

A stronger and more consistent 15 knot breeze played out in Gdynia on Wednesday, ensuring a full complement of races for the 409 sailors from 66 nations were completed.

Gdynia has delivered a range of sailing conditions and has given something for everyone but the local knowledge is proving invaluable for Butowski who is the only sailor to finish in the top ten in every Boy’s Laser Radial race.

“We had two races today and there were gusts up to 20 knots,” he said enthusiastically. “In the first race I had a good start but my vang was not tight enough so I rounded in 15th at the top mark. I managed to come back and I finished the race in sixth which made me happy.

“In the second race I had a good start and I was eighth at the first mark. I made up some places on the downwind and finished second. I am really happy with this day. I am sailing really consistently and it’s really important to do that.”

As the leading Polish sailor and the added bonus of being local to Gdynia, interest in Butowski is high and he was open and frank about the pressure he’s feeling, “It’s quite amazing to be here [racing in my home city]. I have a lot of friends in Gdynia and they’re supporting me. It’s also very stressful because everyone is looking at me like, ‘oh he is from Gdynia, he knows how to sail here.’

“The Polish TV are looking at me as well so they want to have a lot of interviews. It’s important to handle this pressure. I was a bit stressed yesterday so I’m working on handling it.”

As for his plans for Thursday to ensure he stays top, “Keep sailing consistently like I have been. I just need to do my best. The second guy is three points off me so I’ve got to keep consistent.”

Butowski and Argentina’s Cardozo have some points to play with at the top with 2018 bronze medallist Zac Littlewood (AUS) 13-points off the lead in third.

In the Girl’s Laser Radial, Chiara Benini Floriani (ITA), a Laser 4.7 World Champion just one year ago racing on the same waters, continues to hold the lead. She is tied on 17-points with Laser Radial Youth Girl European Champion Ana Moncada Sanchez (ESP) but occupies gold via countback. Great Britain’s Matilda Nicholls is third on 22-points.

The Italian and French riders have been models of consistency and it may be a challenge for the rest of the pack to catch.

Hawkins has some catching up to do, in fifth, but is pleased with how his week is going, “So far I think I’m doing good. I’m happy with where I am at. Before this regatta started, I knew it was going to be tough. I know all of the boys here. They’re all very quick and very good. I was just going to see how I compare and do the best I can. I don’t feel like I’ve made huge mistakes so far so I’m doing good.”

Four further races are scheduled for Thursday ahead of Friday’s final race.

In the Girl’s RS:X, Natasa Lappa of Cyprus could have been leading at the close of the day but she was disqualified from Race 6. The Cypriot sailor sailed superbly but came undone when Joanna Diego (MEX) protested her for a port starboard incident. With a witness available, Lappa lost out and the jury disqualifed her from the race.

The Cypriot sailor discards the DSQ and is four points off Heloise Macquaert (FRA) in top spot. The top seven in the Girl’s RS:X fleet are all close on point so it’s still all to play for.

Over the first three days of competition, the Nacra 15 fleet has seen plenty of ups and downs. Germany’s Silas Mühle and Levke Möller led on day one and slipped to fifth on day two. At the end of day three, they are back in the lead. Two race victories and a fifth propelled them into first overall and they now have a small advantage over day two leaders, Will Cooley and Rebecca Hancock (AUS).

Titouan Petard and Marion Declef (FRA) continue to hold firm in third and with four races remaining, a game of snakes and ladders is still possible.

Martina Carlsson and Amanda Ljunggren of Sweden and Berta Puig and Isabella Casaretto (USA) are locked in a tight fight at the front of the Girl’s 29er fleet.

Another four races played out on Gdansk Bay and the Swedish duo clinched two victories straight away. A ninth and a second followed which was enough to move them into first position, one point clear of the Americans.

Maltese sisters Antonia and Victoria Schultheis had a mixed day, recording a 10-9-4-(21) scoreline which dropped them to third but still firmly in the hunt for gold.

Defending Boy’s 29er Champions Mathias Berthet and Alexander Franks-Penty (NOR) asserted themselves in the 28-boat fleet. The Norwegians won gold via countback at the 2018 edition in the narrowest of finishes to a regatta.

Everything has gone their way across the first three days of the event and a 1-3-4 scoreline has put them on 21-points with their nearest rivals, Archie Cropley and Max Paul (AUS), on 40-points. The Norwegians have not finished outside of the top four once and another day at the front of the fleet on Thursday should be enough for them to confirm gold with a day to spare.

New Zealand’s Seb Menzies and Blake McGlashan held on to first overall in the 30-boat Boy’s 420 after another consistent day. Their first and seventh has given them a 13-point lead over the Israel, British and Italian teams who are all tied on 28-points.

In the Girl’s 420, Madeline Hawkins and Yumi Yoshiyasu (USA), the overnight leaders, claimed a third race win and two further top five results. This has enabled them to open up an 18-point lead after six races.

Racing commences at 11:00 local time on Thursday 18 July as the competition reaches the latter stages. A single race for each fleet on Friday will bring the 2019 edition of the Hempel Youth Sailing World Championships to a close.

The BDI@2,064; a cause for CC …err Cautious Celebrations