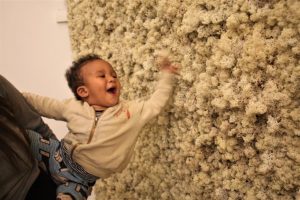 A baby reaches out to feel the texture of Moss Wall, a 20 m wide floor to ceiling blanket of Scandinavian reindeer lichen. The tactile tapestry is a 1994 artwork by the Danish-Icelandic artist Olafur Eliasson, one of his giant-scale exhibits at, and beyond the walls of, Tate Modern.

To see an infant individual enthralled by a surface such as this raises the question: will such delicate organisms of the kind in this natural ‘wall’ be in a robust state by the time the child reached adulthood? Will the fine fibres, which look life like thousands of tiny cushions, be warped by industrial pollution?

This is the type of issue that the artist wants to bring to attention, and wants all citizenry and those holding the levers of power, to address. 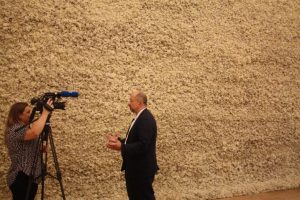 With Olafur Eliasson: In real life the artist delivers to London a choice of his big works from the last three decades. Like Takis, the sculptor of magnetism, sound and light whose extensive exhibition is simultaneously in another wing of Tate Modern, Eliasson brings innovative explorations of science and natural phenomena to life. To heighten awareness of humankind’s relation with the natural world and the scale of climate change, he initiates bold projects in public spaces.

The moss wall is part of an engrossing display that is a follow-up to his 2003 installation The Weather Project, a commissioned work seen by more than 2m people, one that illuminated Tate’s vast Turbine Hall with representations of the sun and sky and mist. That spectacle culminated in lights shining forth as a dazzling sun. It was designed to show how the weather shapes a city and, in turn, how the city becomes a filter for the weather. The mechanism made much of a typical Eliasson roll-call of equipment: mono-frequency lights, projection foil, haze machines, mirror foil, aluminium, and scaffolding. 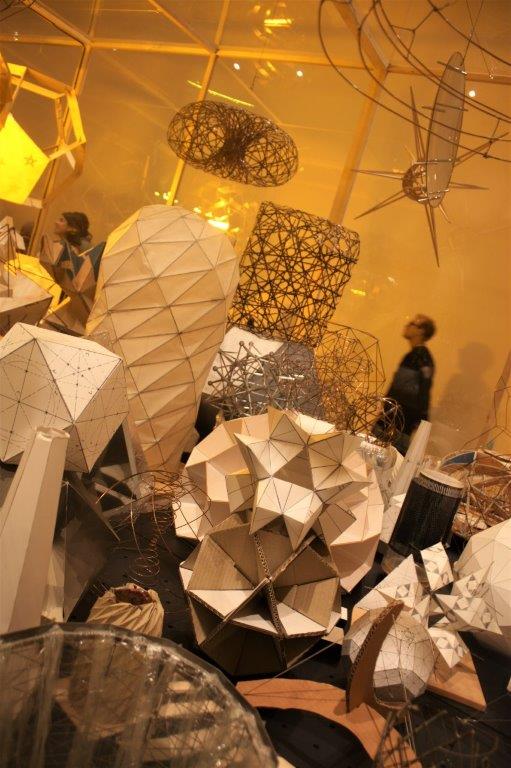 Do we need more reminders of the ravages of climate change hitting the planet here and now, with much worse to come? You don’t need a weatherman to know which way the wind blows, sang Bob Dylan in Subterranean Homesick Blues as far back as 1965.

Olafur Eliasson takes a route other than the civil disobedience tactics of campaigners such as Extinction Rebellion. Shocking the audience is not his way: he prefers to make us wide-eyed with the wonder of natural beauties.

His key is to persuade us to greater understanding of the physical world. That is why he turns the basic elements of the weather – water, light, temperature, pressure – into dynamic experiences and structures.

His mega-installations offer museums, galleries and city authorities the opportunity to declare themselves open to be a platform for examining crucial eco-concerns. Just as we were writing these words, the Tate group of museums issued a statement declaring “a climate emergency” and pledging to play its part in the campaign against environmental degradation.

The new exhibition – a “retrospective” that looks very much to the here and now and to the imminent future – and the Tate statement have clearly been a while in the planning, but stand out in the context of the large demonstrations that briefly disrupted commerce and commuters in London and other western Europe cities just three months earlier.

Most of the 40 works are new to the UK, including some created especially for the exhibition. His materials range from fog to glacial meltwater. Natural phenomena such as water, light, rainbows, geysers and mist are his “tools.” Born in Copenhagen, Eliasson spent considerable time in Iceland as a child and has great sensitivity to pristine Northern territory. 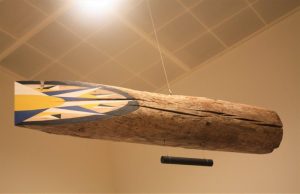 Eliasson’s moss wall turned out to have an unexpected function as the exhibition opened. It proved an ideal backdrop for media interviews with Achim Borchardt-Hume, Tate Modern’s director of exhibitions and programmes, and the curators.

A notice says: “You can touch the moss, but please do not remove it from the wall.” The slow-growing reindeer lichen – cladonia rangiferina – is a natural indicator of air quality and it is vulnerable to air pollution, especially sulphur dioxide, and to overgrazing.

Created a year earlier than the moss wall was Beauty 1993, which conjures the natural phenomenon of a rainbow inside the exhibition.

Din blinde passager (which translates as Your blind passenger and is the Danish term for a stowaway) of 2010 beckons visitors to walk through a 39 m long corridor of what appears to be dense fog with visibility of only 1.5 m. The fog and lights almost blind people as they grope their way along, trying to navigate with their senses to the exit. With the absence of the colour yellow the complementary colour purple or a bluish tint appear in most people’s eyesight. 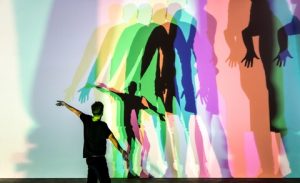 Yellow mono-frequency lights used in Room for One Colour from 1997 reduce viewers’ perception to shades of yellow and black.

There is further audience participation to come. As visitors pass in front of the bright lights of Your Uncertain Shadow (colour) from 2010, they cast unexpected colourful shadows on the wall. installations like this and Your spiral view of 2002 incorporate reflections and shadows to change the way we navigate or perceive the world. Together they reflect the artist’s core ambition of ‘seeing yourself sensing’. As the works reveal the mechanisms behind their making, we are invited to consider the physical and psychological processes that contribute to how we experience them.

Addressing more directly the impact of climate change, there is a montage of photos Eliasson took in 1999 of glaciers in Iceland. This will be replaced in the autumn by a new group of pictures so that changes in the landscape are laid bare.

Kaleidoscopic sculptures including Your Spiral View and the recent Your Planetary Window create optical illusions that encourage visitors to see their environment in new ways. 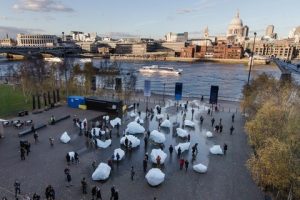 The exhibition explores geometry as a theme that continues to characterise Eliasson’s practice, with works such as Stardust Particle of 2014, which has complex interlocking shapes and crystalline structures.

Model Room of 2003 has on a behind-the-glass wooden table a display no less than 450 models, prototypes, and studies of various sizes that record Eliasson’s collaboration with his studio team and, notably, the Icelandic artist, mathematician and architect Einar Thorsteinn (1942–2015).

Among his materials is driftwood. This is the basis of Adrift Compass, an exhibition copy of a new work from the Tanya Bonakdar Gallery of New York and Los Angeles. Suspended from the ceiling, it is an example of this great communicator’s interest in navigational instruments.

Before leaving the exhibition, there is a chance to learn, by taking in the contents of a room called The Expanded Studio, Eliasson’s practical engagement with social and environmental projects.

This includes the social business Little Sun, launched at Tate Modern in 2012, which provides solar-powered lamps and chargers to communities without access to electricity. Green Light is an artistic workshop in which asylum seekers and refugees, with members of the public, construct energy-saving lamps and take part in educational programmes. There are insights into how Studio Olafur Eliasson in Berlin founded in 1995 involves craftspeople, architects, archivists, researchers, administrators, cooks, programmers, art historians and technicians. 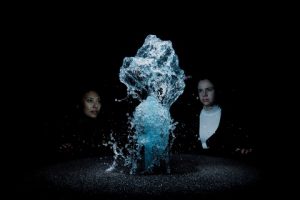 One of Eliasson’s most dramatic actions to highlight the climate emergency has been to stage Ice Watch, an installation of glacial ice from Greenland, most recently outside Tate Modern and the European headquarters of Bloomberg. Scientists say that warmer climates have caused the Greenland ice sheet to shed around 200bn to 300bn tonnes of glacial ice each year, a rate that is expected to increase dramatically. (According to the National Snow & Ice Data Center, based at Colorado University, a warm spring has meant that from June 11 to 20 2019 alone the total melt was some 80 bn tons, of which 30bn tons ran off into the ocean, or was stored temporarily in lakes.)

A more abstract reference to the changing environment is a new work, Glacial spherical flare. This mirrored mosaic is constructed with glass coloured by minerals left behind when by the glacier melt.

On the terrace outside Tate Modern is Waterfall 2019, a dramatic new installation more than 11 m high.

The event even extends to Tate Modern’s Terrace Bar, where Studio Olafur Eliasson’s kitchen team, SOE Kitchen, has collaborated with Tate Eats on a special menu based on organic, vegetarian and locally sourced produce. 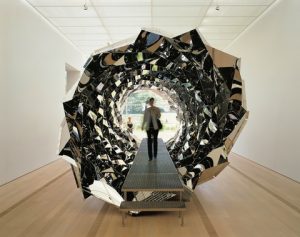 In an interactive initiative, visitors are invited to send questions to the studio via Twitter by using the hashtag #askSOE. Questions are presented with the studio’s responses at olafureliasson.net/asksoe and screened in The Expanded Studio section of the exhibition.

The exhibition is curated by Mark Godfrey, senior curator, international art, and Emma Lewis, assistant curator, in collaboration with Studio Olafur Eliasson. It is accompanied by public events throughout the gallery and in the Terrace Bar, and a new catalogue from Tate Publishing.

Following the presentation at Tate Modern the exhibition will be mounted at the Guggenheim Museum, Bilbao, from February 14 to June 21, 2020.

The Tate statement said: “We have reached a defining moment in the history of our planet and the cultural sector has a unique part to play in effecting change. This week Tate’s directors are declaring a climate emergency. Our pledge is to respond with actions across all four Tate galleries, and at our stores, that put this centre stage.

“Last week we opened Olafur Eliasson’s exhibition at Tate Modern. We took his ethical commitment to addressing environmental issues as a cue to offer a platform for discussion in partnership with artists, campaigners, artistic communities and cultural organisations. Hundreds gathered to debate in the Turbine Hall. Tate is committed to reducing its carbon footprint by at least 10 per cent by 2023 and is switching to a green electricity tariff across all four galleries. We have helped shape international green museum principles for the care of collections and are sustainably sourcing food in our restaurants and bars, offering greater emphasis on vegetarian and vegan choices. We are auditing our travel and are adopting a train-first policy.

“There are, nevertheless, some hard truths to face about how we operate; about the sustainability of public institutions, like our museums, and about the future of culture. Large public buildings, attracting millions of visitors from the UK and overseas, require energy. We see caring for and sharing a national art collection as a public good, but it also consumes resource. We are rooted in the UK but international in outlook: making art accessible globally depends on the movement of works of art across the world.

“That’s why we pledge to make our long-term commitment ambitious in scope. We will interrogate our systems, our values and our programmes, and look for ways to become more adaptive and responsible.

“As an organisation that works with living artists, we should respond to and amplify their concerns. And, as our audiences and communities across the world confront climate extinction, so we must shine a spotlight on this critical issue through art.

“Our declaration of a climate emergency is just the beginning in our determination to effect and inspire change.”

Olafur Eliasson: In Real Life is at Tate Modern until January 5, 2020. It is supported by AKO Foundation, with additional support from the Ólafur Eliasson Exhibition Supporters Circle, Tate Patrons and Tate Members.