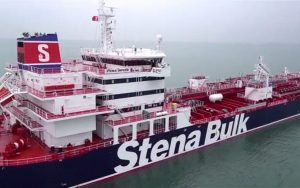 London. UK. Following the detention by Iranian Revolutionary Guard forces of the UK-flagged Stena Impero on Friday 19 July and the latest reported actions which have seen the 23 person crew taken off the ship for “questioning”, Human Rights at Sea renews its call for widely-accepted UN guidance outlining the basic human rights protections for crew during the deprivation of their liberty in such circumstances.

The issue of the current lack of such UN agency endorsed international guidance related to protection of crew, passengers (and Privately Contracted Armed Security Personal) on board vessels subject to arrest, detention and detainment was first identified by the charity in 2015 following on from the Seaman Guard Ohio case.

Subsequently, in partnership with the Network of Experts on the Legal Aspects of Maritime Safety and Security (‘MARSAFENET’) and financed through the European Union COST Action IS1105, in June 2015 the charity published the first independently drafted international document covering Deprivation of Liberty (‘DoL’) by Shipmasters, crew and/or Privately Contracted Armed Security Personnel (‘PCASP’). This was co-authored by Prof. Dr. Anna Petrig.

The publication was the result of in-depth research into the domestic and international legal frameworks governing deprivation of liberty on board private vessels of 30 flag States. The document remains relevant, and it complements existing guidelines on fair treatment of seafarers in the event of a maritime accident as adopted by the International Maritime Organization.

The Guidance is based on two underlying principles. First, human rights apply at sea as they do on land. Second, DoL is an exceptional measure since it interferes with the general right to liberty.

Today, the detail of the 2015 guidance needs reviewing and updating to take into account the basic actions of port State, flag State and coastal State authorities when depriving individuals of their liberty under national legislation.

In the case of the Stena Impero, the outcry about seafarers being held hostage for political reasons has drawn significant criticism from both the UK government and Unions, while the company is now seeking access to the crew in the port of Bandar Abbas.

Human Rights at Sea contacted Stena Bulk to confirm, or otherwise, if there was a current policy and related materials for awareness and the educating of crew and management on the rights and considerations of crews deprived of their liberty, and the actions of their ship masters at first instance in such circumstances.

A spokesperson for Human Rights at Sea commented that: “The topic of deprivation of liberty at sea is an important aspect to be included in the development work for the emerging second version of the Geneva Declaration on Human Rights at Sea, and with the latest incident in the Gulf off the Iranian coast involving the Stena Impero and its multi-national crew, we remain convinced that there remains the need for such international guidance and clarity.”