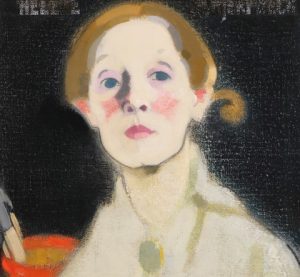 All hail Helene Schjerfbeck! Hers is an illustrious name in Finland’s pantheon of modern artists, but she has been sadly overlooked in the UK. No longer, and about time too. She had even spent time in Cornwall in her early career.

She has been described as the Edvard Munch of Finland, but the comparison with the tormented Norwegian is far-fetched, as is bracketing her with Frida Kahlo, the fiery Mexican feminist who refused to be disheartened by disability.

Helene pursued a distinctive path, as is made abundantly manifest in an enthralling survey at the Royal Academy of Arts of her long and productive career. 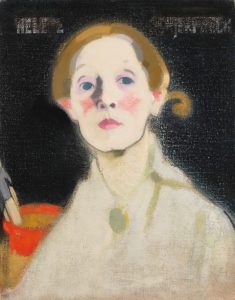 Reviewers tend to focus on her multi-year sequence of haunting self-portraits, which are inevitably central to the London display. Because the portraits chronicle her physical (but not artistic) decline, critics were tempted to allude to Munch and Kahlo when assessing her contribution.

What one ought to take on board just as keenly as the fascination of the portraits is her pleasure in depicting, from life and from imagination, and often with affection and even humour, the variety of types populating her neighbourhoods. There is a magnificent opportunity to do that by taking care to peruse all 65 works on the RA walls.

Even so, if all visitors take away from this marvellous exhibition are memories of the 17 self-portraits selected from the series executed between 1885 to 1945, the exercise of bringing Helene to UK audiences will have been worthwhile.

Curator Jeremy Lewison said that Schjerfbeck was witness throughout her life to great changes in contemporary art and her interests included the works of old masters, ‘primitive’ sculpture and Japanese woodblock (Edo period prints by Kitagawa Utamaro) “but she is her own woman.” 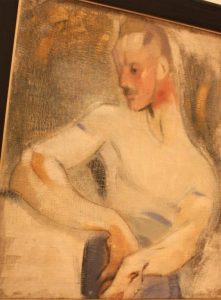 This is, remarkably considering her reputation in much of Europe, the first solo exhibition in the UK devoted to Helene Schjerfbeck (1862-1946). It is a bit of a mystery why we have waited so long when she has in the last few years been celebrated by exhibitions in Paris, Hamburg and The Hague, and there are plenty of works to choose from: she completed 1,000 paintings.

Much of her output looks as though it could have been painted in the last few decades. The great Ateneum Art Museum, Helsinki, has the good fortune to possess prime examples, and is the source of a good portion of the  loans in the new exhibition.

As with Frida Kahlo, an accident early in life propelled Helene into the sphere of art. At the age of three, she broke her left hip, leaving her with a limp, and her father gave her sketching materials to keep her occupied. She showed such promise that by the time she was 11, she was impressing the genre painter Adolf von Becker, who secured her a free place at the Finnish Drawing School. 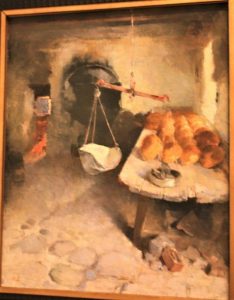 In 1877 she moved to von Becker’s private academy and in 1880 won a grant to study in Paris, at the Académie Trélat and the Académie Colarossi. There she met fellow artists who were to be lifelong friends: Maria Wiik and Marianne Stokes (née Preindelsberger), the trio entering what was largely the domain of male artists. Helene’s earliest work in the exhibition is Two Profiles from 1881 depicting Marianne.

Amid grander subjects, the RA includes the 1883 oil painting Clothes Drying – the large garments laid out on the ground, Finnish-style.

In 1887 Marianne and her artist husband Adrian Scott Stokes invited Schjerfbeck to the Cornish resort of St Ives, where the quality of light and opening of a rail service was beginning to attract scores of British artists. There she painted The Convalescent, a touching picture of a young girl nurturing a sad plant in a pot. Shown at the Paris Salon and later bought by the Finnish Art Society, this is considered one of her most appealing works in the inventory of the Ateneum Art Museum. 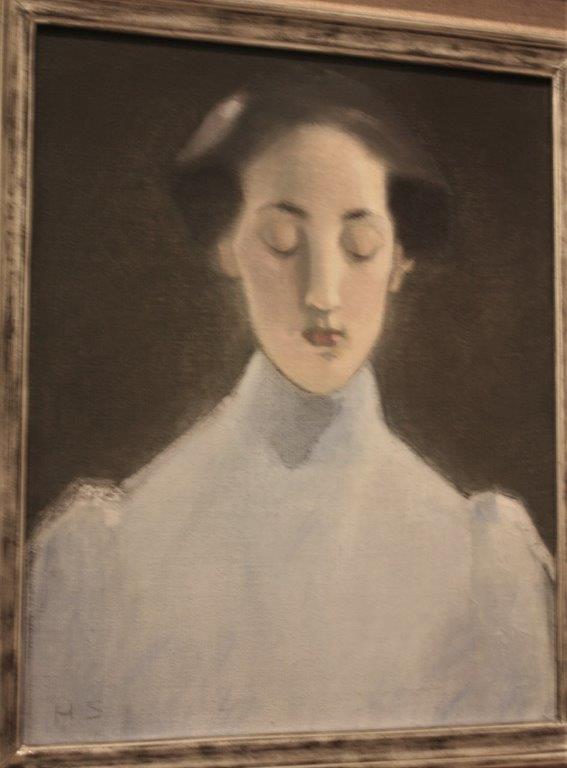 From the St Ives period, and seen at the RA, is another oil canvas, The Bakery, lent by the Karl Hedman Collection of the Ostrabothnian Museum, Vaasa.  This is a naturalistic depiction of a working kitchen in the town showing a satisfying 18 loaves just baked. The gallery label comments that in removing all figures from the scene, she captures the atmosphere through colour, light and composition. 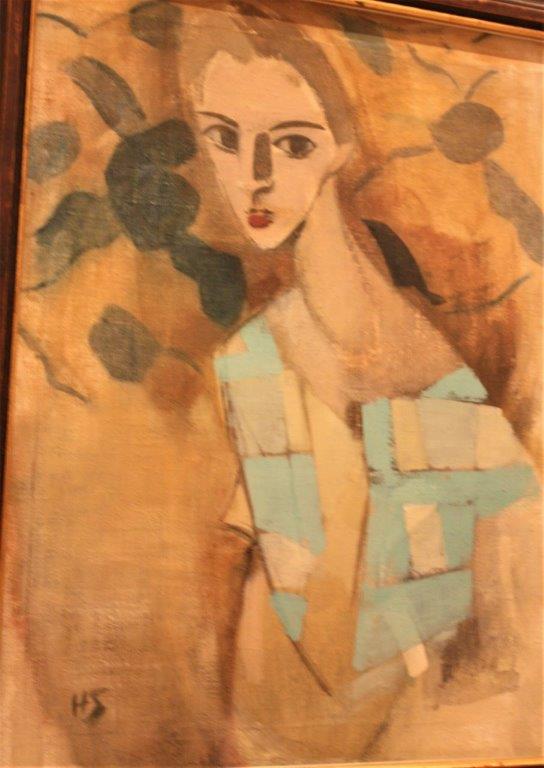 In 1887 an exhibition at the Institute of Painters in Oil Colours in Piccadilly, London, included one of her paintings and she returned there in 1889 and 1890. Schjerfbeck travelled to St Petersburg, Vienna and Florence in the following years before returning to Helsinki to take up a teaching position at the Ateneum drawing school.

She made further visits to Paris, being commissioned by the Finnish Art Society to copy Old Master paintings in the great collections for use as teaching aides at the Ateneum school.  This piqued her interest in 17th century Dutch works—the Vermeer kind of painting – and El Greco and Whistler.

Foreign travel came to an end, and initially looking after her mother she was to spend long periods in small Finnish towns, including Hyvinkää and Tammisaari, but in her reading eagerly followed artistic developments in Europe and changed styles at will, while maintaining a pared-back approach to her subjects, which included herself.

Take the portrait of her friend Einar Reuter entitled The Sailor (Einar Reuter) 1919, oil on canvas, now in a private collection. It is thought she may have had some romantic inclination towards him, and even though he is a forester and painter she calls him The Sailor. His physique is clearly admired.

Reuter (1881-1968) and the Swedish journalist and art dealer Gösta Stenman helped build her reputation. After in 1914 Reuter bought one of her paintings, they became great friends. Under the pseudonym H Ahtela, Reuter wrote a biography of her in 1917, for her first solo exhibition in Helsinki, organised by Stenman.

The view of the artist as highly introverted and depressed is attributed to the biography by Reuter and to her writings about her frail health. In 1917 she wrote: “not a healthy day in 50 years. One gets so tired of fighting.” Sometimes she could paint for only one or two hours a day. This was frustrating for a person who insisted: “Dreaming does not suit me. to work, to live through work, that is my path.” 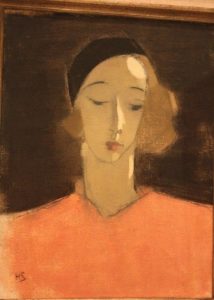 In the central hall of the gallery the absorbing assembly of self-portraits consists of expressionist works of raw honesty resulting from Schjerfbeck’s close attention to the aging process: no escape from the ravages of time and tread of mortality. There is an absence of physical distress and of her environment, and of any indication of the impact of outside events – for instance that she was evacuated to Sweden during World War II. Finally, in portrait she is reduced to a ghost of herself. 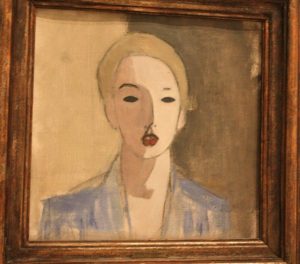 The curators say that these works show her journey from impressionistic beginnings (and the bloom of youth) evident in the earliest work, Self-portrait of 1884-85 (Ateneum Art Museum), to the pared-down confidence of such later paintings as Self-portrait, Black Background from 1915 where her appearance is becoming more neutral. This latter, again from the Ateneum, could be the fulcrum of her entire output.  It is a manifesto, declaring that I am an artist, says Mr Lewison. “She is beginning to understand about the notion of staging herself.” She paints herself as a different personality each time and the images become more mask-like.

As the years went by, she was flattening the perspective and simplifying form, noticeable in the early years of the new century with portraits of her mother and grandmother. The results take on an unfinished character as the colour drains from the palette. 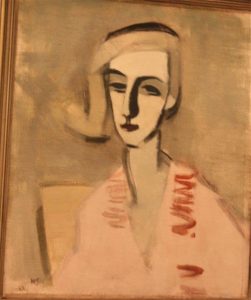 Categorisation of the population was popular in German art, and she is caught up in the idea of representing the community of Swedish speakers.  The Finnish language was becoming more frequently used and the Swedish less so, although still the language of business and diplomacy.

Many of her models were working girls from factories. When no models were available, she would work from photos or from memory.

In this field is the attractive Girl from Eydtkuhne II. This oil on canvas from 1927 is part of the Yrjö and Nanny Kaunisto Collection, which began in 1943 when Yrjö Kaunisto, a medical captain, and his wife Nanny, an ophthalmologist, visited Helene in hospital and bought a painting, a gouache showing flowers. Of 78 works of art the couple jointly willed to the Ateneum in 2005, 35 were by Schjerfbeck.

Another delightful face from the Yrjö and Nanny Kaunisto Collection is The Teacher, from 1933. 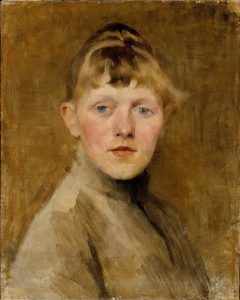 Further charming genre works include Girl with Beret, from 1935, which is loaned by Didrichsen Art Museum, Helsinki. Later still is Stubborn Girl, 1938-39 from a private collection.

Interest in fashion had a strong bearing on her output. She enjoyed dressing in new styles and subscribed to magazines such as L’Amour de l’art (established in 1920), Marie Claire(first published in March 1937) and the relatively downmarket Chiffons.  She must have approved that fashion magazines continued to use drawings on their covers on the theory that these appealed more to consumers than did photographs. and her paintings echoed trends such as the gender-neutral look, flappers and the straight-line clothing of Coco Chanel. That she took inspiration from the way make-up is applied is clear from her portraits.

Silence, a painting in oil and tempera from 1907 shows a woman in enigmatic contemplation, her unfussy pale blue blouse perhaps a source of satisfaction. This is from the Helsinki-based Art Foundation Merita. The foundation stems from a century of collecting by 25 Finnish commercial banks, particularly Kansallis-Osake-Pankki (KOP) and Union Bank of Finland (SYP). At times, these collections included more than 10,000 works. 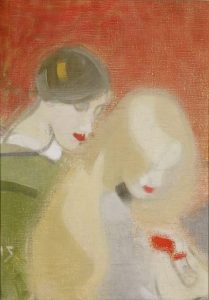 In her more expansive moments, she gave the works fictional titles, for example Måns Schjerfbeck (The Motorist) of 1933 from Sven-Harrys Konstmuseum, Stockholm, featuring her nephew Måns who did not even have a licence to drive.

Her second solo exhibition was in Stockholm in 1937, and an exhibition of 120 works was planned for the US two years later but was cancelled because of the outbreak of the Soviet invasion of Finland. Even when evacuated to Sweden and in hospital she was picturing her nurses

The exhibition concludes with a section devoted to Still Life, including her final work, Three Pears on a Plate, which is held in a private collection, and Still Life with Blackening Applesfrom Didrichsen Art Museum. These are more mournful pieces than we normally expect from the genre, but this can be explained by the fact she was working at the same time on the least of her self-portraits. 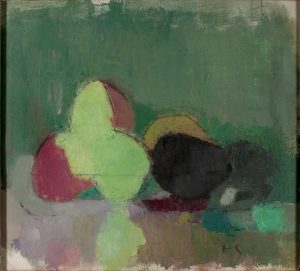 The venue for this exhibition is known as the Gabrielle Jungels-Winkler Galleries, most easily reached from the entrance to the refurbished Burling House section of the academy. It affords the space and light to give these works the room that they deserve. RA artistic director Tim Marlow said: “This is exactly the kind of show we should be doing in our expanded campus.”

Jeremy Lewison, an independent art historian, curated the exhibition with Anna-Maria von Bonsdorff, chief curator at the Ateneum Art Museum, and Désirée de Chair and Sarah Lea, curators at the Royal Academy.  It will open at Ateneum Art Museum, Helsinki, in November 2019.

There is every reason to believe that after this thorough-going display, Schjerfbeck’s reputation will soar in the UK. It will be plain why Finland treasures her as much as Akseli Gallen-Kallela (1865- 1931) the champion of Finnish national identity through legend and landscape, and the writer and creator of the Moomins Tove Jansson. 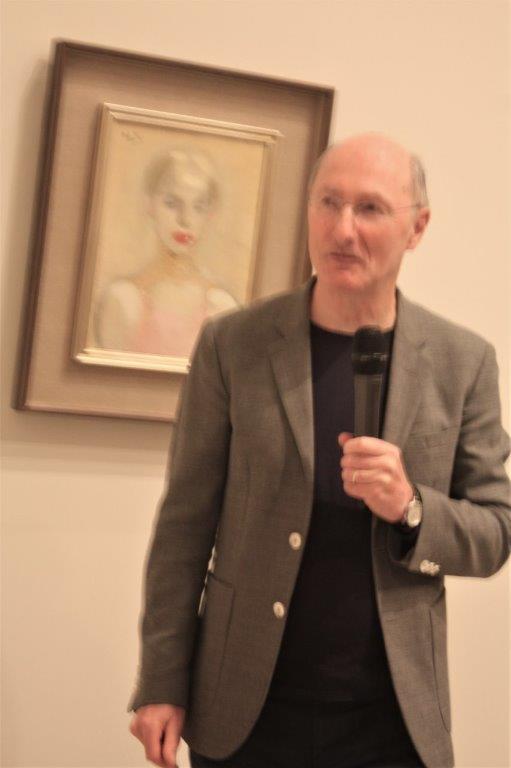 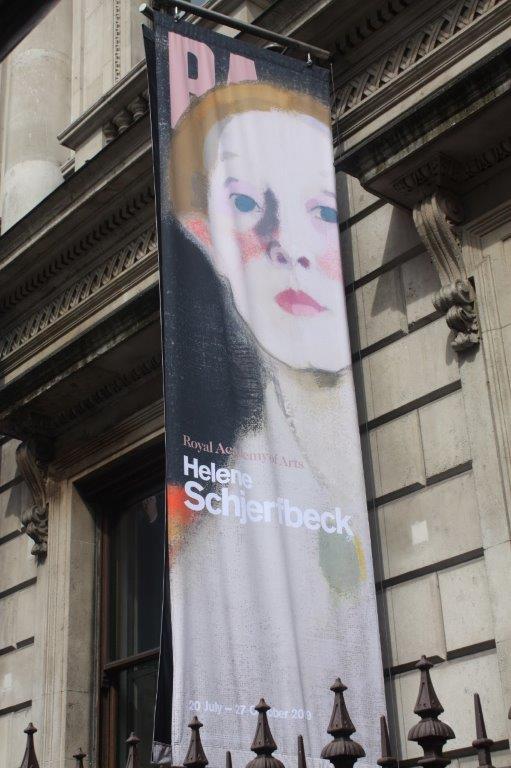 Helene Schjerfbeck exhibition is at the Royal Academy of Arts, London, until October 27, 2019.