“Orderly” fall for the BDI; tsunami to follow perplexed geopolitics

“Orderly” fall for the BDI; tsunami to follow perplexed geopolitics

The BDI (Baltic Dry Index) lost 14 points and now stands at 1,774; the geopolitical situation has never been so tense and everything can be expected. John Faraclas daily recap:

Losses for the Supras’ BSI now at 959 – down nine points!

The exception: the Handies’ BHSI gaining two points and now reading 519 concludes a day of jeopardy as all Stock Markets fell given the Sino-American messy trade war with the culprit being the Chinese Yuan… CAUTION as Planet Ocean cannot sustain any further financial loss given that already its debt stands at US$ 250 trillion (twohundredandfifty)!!!

The Wets with mixed feelings; the last published BDTI (Dirties) and BCTI (Cleans) stood at 617 – minus four and 489 – plus 22 points – surprise surprise, respectively!!!

What a weekend that  was on Geopolitics, eh!

The MIGRANTS still on top… with incalculable developments… Wait and see the mess and the spill-over very soon..!

The double massacre in USA – El Paso, Texas and Dayton, Ohio left over 31 people dead and many wounded some have passed away… There isn’t any excuse whatsoever… This is sheer madness and we had enough from gun laws; nothing really works… ENOUGH!

How ready we are to see a confrontation with the fear of nukes being used between India and Pakistan because of Kashmir? Dangerous issues which boil for nearly 70 (seventy) plus years… CAUTION.

BREXIT, as we have foreseen from the right beginning is gone to make the World go round… Both sides in the British Channel are at loggerheads and destruction awaits all in case of a non-BREXIT situation. Wonder what’s really at stake and both sides opt to fight to the bitter end ignoring millions of people will be directly affected… particularly when none of the “combatants” is ready… There might be a flip side for a better future for the UK with a BREXIT and non-BREXIT deal,but let’s see the guarantees…

And what about the East Med were Turkish blackmail is currently as its best. A pariah state, made on purpose by president Erdogan, will create a more than explosive situ in the entire region – at least 1,000 miles around Turkey’s current borders… Turkey might any time invade north Syria and in particular east of Euphrates River to protect itself by the Kurds there… Meantime its stance with Cyprus and Greece over oil and gas exploration in the Aegean and in the East Med sky rocks and at any time you might hear the drums of war with a general conflagration with at least a dozen counties getting involved…

We repeat our warning for the faulty line from Gib to Afghanistan and from the Caucuses to the Horn of Africa… Libya in total mess, the Israeli – Palestinian animosity continues with more ferocity than ever before… The Arabian Peninsula is also on fie; Iraq still in a mess… The Balkans too in a mess… expect an unorthodox spill over there too as Turkey stirs up the entire region… Add the fact that Turkey is bankrupt and from a bankrupt country expect everything to happen… Can you imagine what will happen if Israel under the pretext of self defence strikes Iran…

Greece is on a stand-by as no one can relax having an odd NATO “ally”, that is to say Turkey… Greece tries to stand on its feet following a messy ten years, thanks to the Europeans strangulating the Greek people – this is the real story!

Venezuela: Nine months of explosive situation and no one knows whose the president there; Nicolás  Maduro or Juan Guaidó. meantime neighbouring Colombia gave citizenship to 24,000 Venezuelan children, eh!

Africa continues in disarray all over; Libya, Sudan to name but a few… Terrorists hit in Cairo and kill 21 people with nearly 50 more injured… 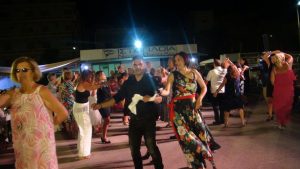 Over the weekend we had two inspirational events – both on Saturday; the annual dinner and dance of the Union of Chians in Diaspora on the island of Chios in Greece and the at Art Can group show, Wanderlust at the Ollerod down at Beaminster  – …shipping-wise located at Lat: 50.808048 and Long: -2. 7374491!

A few hundred people gathered at the Nautical Club of Chios for the annual dinner and dance which this year coincided with the 8th International Conference of the Diaspora Chians and the 64th Forum of the Chians’  Diaspora Associations in the USA and Canada which takes place on the island  and attracted Diaspora Chians as well as other Hellenes from all American cities where they live! 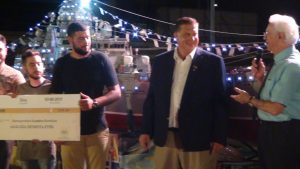 Pantelis Bournias at the centre and to his right Stamatis Krimizis

Who wasn’t there in this event; the Diaspora Chians, the locals, politicians, academics and amongst the Head Emeritus, Space Department,  Stamatios (Tom) M. Krimizis the  Vrontadoussian/Chiot – Greek-American scientist in space exploration who has greatly  contributed to many of the United States’ unmanned space exploration programs of the Solar System and beyond.!

Congratulations to Pantelis Bournias – the president of the Union of Diaspora Chians who managed during the high touristic season to have most of our friends, cousins and relatives there at the iconic “Bella Vista”, the place of reference of  Chian life to celebrate this event.

Local ND MP and Deputy Minister of Labour & Social Affairs Notis Mitarakis spoke too saying that next time round the Chians in Diaspora when they will visit the island next year they will see a new / improved airport and port too as well as improvements in the island’s infrastructure. Let’s hope! 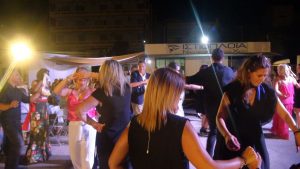 This is what we call Chian traditional events

Afterwards Pantelis Bournias invited the president of the United Chian Societies of USA and Canada Dimitris Kontolios, a Councillor in New Jersey to speak for the occasion. He congratulated Pantelis Bournias for the impeccable organisation, jovial atmosphere and success of this annual event!

This event was devoted for the Christmas / New  Year hand made boats, a very touching custom which needs our support as it is a continuation of Chios’ maritime and religious tradition – both being interwoven! There were two prizes each of Euros 250 and same were given to this years’ winners – youngsters are the shipbuilders from  the neighbourhoods of St. Paraskevi Parish Castello and the Castle of Chios by Stamatis Krimizis !

Well done and we thank Galatia Paradisis for her continuous support in assisting us report these events from Chios. 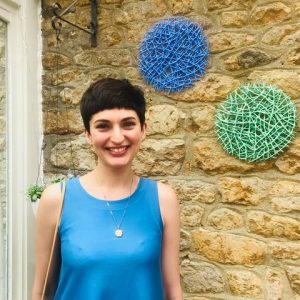 Kira Phoenix K’inan with two of her exhibits

In the world of creativity, glass artist Kira Phoenix K’inan is exhibiting three works from the Constructure series.

Curated by Kate Enters, Wanderlust brings together artists that explore and express their travel discoveries through creative outcomes.  All in all 17 artists take part!

To read more about ArtCan – https://www.artcan.org.uk

Have a nice evening and  continue to be on guard from actions emanating by Pirates, Terrorists, Criminals and Business hooligans whatsoever wherever you are on Planet Ocean…