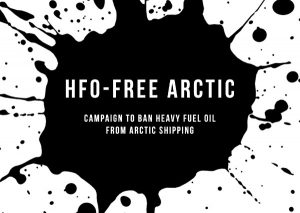 Beijing, 12 August 2019:- Responding to reports that the 190m-long COSCO-owned cargo vessel Tian’en is due to arrive in the Swedish port of Gävle on August 18, having traversed the Arctic’s Northern Sea Route between the Pacific and the Atlantic [1], Clean Arctic Alliance Lead Advisor Sian Prior said:

“Earlier this year, the Clean Arctic Alliance wrote to COSCO requesting it make public the nature of the fuel that the Tian’en, and other COSCO vessels planning on transiting the Northern Sea Route, will be using and carrying through Arctic waters.  As we have yet to receive acknowledgement, we have written to COSCO again in an effort to better understand the company’s plans for this season [2]. Due to the risk from oil spills, and the climate impact of burning heavy fuel oil in Arctic waters, we are asking COSCO – and its customers – to commit to using and carrying only lighter distillate fuels or other cleaner alternatives instead of the world’s dirtiest fuel – heavy fuel oil (HFO) – for powering its ships in the Arctic.”

“With Arctic summer sea ice less than half the extent it was in the 1970s, and half the volume, and the news that the region’s summer sea ice could reach its minimum extent ever this year, using heavy fuel oil to power shipping in the Arctic would be a poor choice. It not only increases the risk of oil spills, but also generates emissions of black carbon, which exacerbate the melting of both sea and glacier ice in the Arctic region,” she continued.

In June 2019, High North News reported that COSCO, or the China Ocean Shipping Company, could be conducting as many as 14 Northern Sea Route transits between July and October [3], a situation confirmed by the permits issued by the Russian government [4].

“Global shipping companies like COSCO should be setting an example for those who would seek to move commercial goods through the Northern Sea Route, by championing clean and renewable forms of propulsion for Arctic shipping”, said Prior.

HFO is already prohibited for use and carriage in the Antarctic, and in 2017, the International Maritime Organization’s (IMO) International Code for Shipping in Arctic Waters or “Polar Code” came into effect, including a recommendation that ships in the Arctic apply the same practices with respect to HFO. In April 2018, the International Maritime Organization’s Marine Environment Protection Committee agreed to move forward on consideration of an Arctic ban on heavy fuel oil.  During PPR6, an IMO technical sub-committee meeting in early 2019, IMO Member States finalised a methodology for assessing the impact of a HFO ban on Arctic ecosystems, Indigenous local communities and economies, and commenced the work needed to define what types of fuel will be banned and how they will be banned [5].

“The Arctic is already under immense pressure from  climate change – Greenland’s ice sheet is seeing large scale melting, and wildfires are burning across Alaska, Canada and Siberia [6]. International shipping companies wishing to use the shorter Arctic routes to move cargoes in one of the most sensitive and vulnerable regions of the world – must burden the responsibility of showing that their actions are not exacerbating the crisis. We look forward to hearing a response from COSCO,” concluded Prior.

Along the Northern Sea Route, a caravan of 6 ships follows the Russian icebreaker Vaigach

As the “Operation Line” reported on the eve of August 4, a Chinese ice-class cargo ship Tian En, which carries out full transit via the NSR to Sweden, is sailing in the caravan of ships, the remaining vessels will disperse to other ports less remote from the Arctic.

“[Russian Icebreaker] Vaygach is leading quite a convoy in the East Siberian Sea: four tankers and two cargo ships. Tian En is the only vessel making an international Northern Sea Route transit from China to Sweden, but Zaliv Kresta is the only ship that didn’t come through the Bering Strait.”

[7] Arctic wildfires: How bad are they and what caused them?

Greenland Is Melting Away Before Our Eyes

August 2018: A Chinese cargo ship specially built for the Arctic has embarked on its first Northern Sea Route voyage

About Heavy Fuel Oil
Heavy fuel oil is a dirty and polluting fossil fuel that powers ships throughout our seas and oceans – accounting for 80% of marine fuel used worldwide. Climate change is fuelling high winter temperatures and driving sea ice melt, opening up Arctic waters to shipping. As the sea ice recedes, larger, non-Arctic state-flagged vessels running on HFO are likely to divert to Arctic waters in search of shorter journey times. This, combined with an increase in Arctic state-flagged vessels targeting previously non-accessible resources, will greatly increase the risks of HFO spills.

Around 75% of marine fuel currently carried in the Arctic is HFO; over half by vessels flagged to non-Arctic states – countries that have little if any connection to the Arctic (See also: Five briefing papers on the use of heavy fuel oil in the Arctic).

Already banned in Antarctic waters, if HFO is spilled in cold polar waters, it breaks down slowly, proving almost impossible to clean up. A HFO spill would have long-term devastating effects on Arctic indigenous communities, livelihoods and the marine ecosystems they depend upon. HFO is also a greater source of harmful emissions of air pollutants, such as sulphur oxide, and particulate matter, including black carbon, than alternative fuels such as distillate fuel and liquefied natural gas (LNG). When emitted and deposited on Arctic snow or ice, the climate warming effect of black carbon is up to five times more than when emitted at lower latitudes, such as in the tropics.

In April 2018, the IMO agreed to move forward on developing a ban on heavy fuel oil from Arctic waters.

This followed agreement  in July 2017 for MEPC to consider “development of measures to reduce risks of use and carriage of heavy fuel oil as fuel by ships in Arctic waters”. The Clean Arctic Alliance also welcomed this move, stating that a ban on the use and carriage as fuel by ships operating in the Arctic is the simplest and most effective way to mitigate the effects of HFO.

See also: Five briefing papers on the use of heavy fuel oil in the Arctic, prepared by Bryan Comer PhD, The International Council on Clean Transportation (ICCT), for the Clean Arctic Alliance. These papers look at HFO use by flag state, by ship type, by shipowner, and looks in more depth at HFO use by cruise ships and by fishing vessels in the IMO Polar Code Arctic, 2015.

More Clean Arctic Alliance publications on heavy fuel oil in the Arctic can be downloaded here– plus some useful infographics, and our Frequently Asked Questions can be found here.

Launched at the Arctic Frontiers conference in January 2017 by the Clean Arctic Alliance – a coalition of non-governmental organisations – and expedition cruise ship operator Hurtigruten, the Arctic Commitment aims to protect Arctic communities and ecosystems from the risks posed by the use of heavy fuel oil, and calls on the International Maritime Organization (IMO) to ban its use and carriage as marine fuel by Arctic shipping. An HFO ban has already been in place in Antarctic waters, since 2011. In July 2017, the Clean Arctic Alliance welcomed action being taken by IMO member states to start work to identify measures to mitigate the risks of HFO spills, during the IMO’s Marine Environment Protection Committee meeting (MEPC71).