Enoshima experience paying off on Day 1 of Ready Steady Tokyo 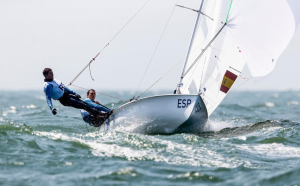 Enoshima experience paying off on Day 1 of Ready Steady Tokyo

The official test event of Tokyo 2020, Ready Steady Tokyo – Sailing, got underway today with the first day of racing.

And the 363 sailors from 47 nations were met with strong winds and big waves in Enoshima, Japan, an ideal way to start six days of competition.

The 470s held both the Men’s and Women’s World Championships on these very waters just last week, meaning their sailors will by now be very familiar with the conditions in Enoshima.

After finishing runners-up to the 2019 title, the Spaniards have made an electric start to Ready Steady Tokyo, winning both races on the opening day.

And though they recognise it’s only Day One, they couldn’t hide how much they relish competing at this venue.

“Enoshima already produced very good conditions at the Worlds, and today it was perfect – 15 knots and big waves,” commented Xammar.