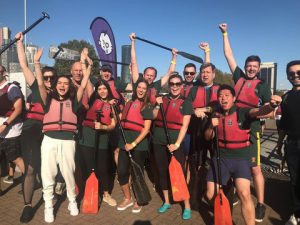 THE SIXTH ANNUAL OSCAR Dragon Boat Race took place on Friday 13 September as the finale event of London International Shipping Week 2019; the sun shone and almost 500 people were in attendance from all areas of the shipping industry.

The provisional fundraising total from the day stands at £155,000 which means the OSCAR Campaign has reach over £2million for Great Ormond Street Hospital for Children (GOSH).  The OSCAR Campaign’s namesake is Oscar Parry, son of Philip. Oscar was treated for two types of leukaemia from age 3 to age 8. He had two bone marrow transplants – the second trialling an entirely new theory, experimental stem cell transplant, 5 brain haemorrhages. Now 20, Oscar is a living example of the value of bench-to-bedside research and treatment.

Hosted by Spinnaker Global, Chairman and Founder of the OSCAR Campaign Philip Parry said of this year’s event “Every year I am humbled by the shipping industry’s support and enthusiasm. This year we hoped to raise £150,000 to take us over the £2m fundraising total and the industry responded – we had 27 teams including ten shipowner teams. The race was won by Borealis who were also the top fundraisers so a huge thank you is due to Christoph Toepfer and Andrei Constantin. Other than my colleagues Lauren Thipthorpe and Rachel Morgan, without whom I could not organise the event, it’s impossible to single out any one person as so many people have become integral to the event’s annual success. We are especially grateful to those companies who come back year after year and to our sponsors Blue Seas Adjusters, Oldendorff, RightShip and IG Group.”

The race winners were Borealis Maritime (pictured below), with Swire Bulk in second and Lomar Shipping third place.

The event was sponsored by Oldendorff, IG, RightShip, and Blue Seas Adjusters.

Special mention goes to Christopher Bergsland, Commercial Director of Golar LNG whose son Billy has acute lymphoblastic leukaemia and is being treated at GOSH. Christopher organised four LNG market teams and raised £10,000 in sponsorship. Thanks must also go to Docklands Sailing & Watersports Centre, our press partners TradeWinds and Tim Browne for all photography.

Photos from the event can be found at https://www.flickr.com/photos/spinnakerglobal/