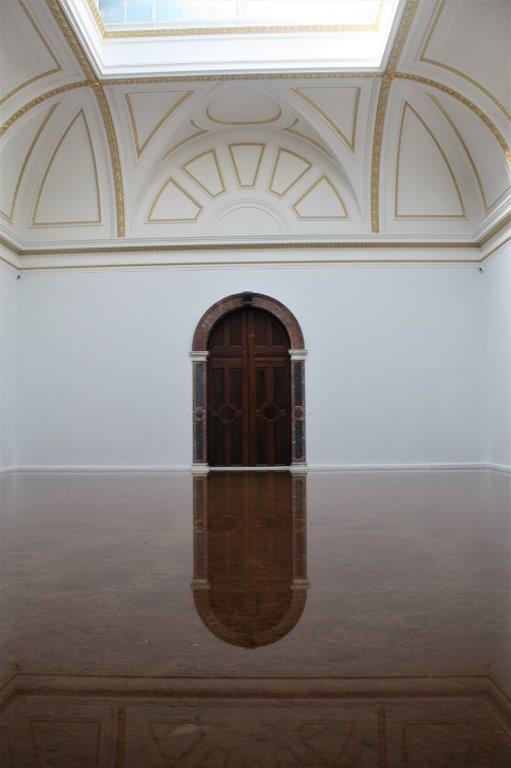 A large truck drew up on a cloudy Monday evening in the courtyard of the Royal Academy in London. Its just-in-time delivery was a container full of Atlantic Ocean water – 20 tonnes (20,366 litres) of the expanse that covers one-fifth of the surface of Planet Ocean.

Sir Antony Gormley, one of the most celebrated living sculptors, needed this scoop of seawater for his latest installation, which involved flooding one of the august institution’s precious halls – normally known as gallery number nine. The “seabed” is a swathe of Buckinghamshire clay, part of a geological feature layered perhaps in a period of global warming 100m years ago. 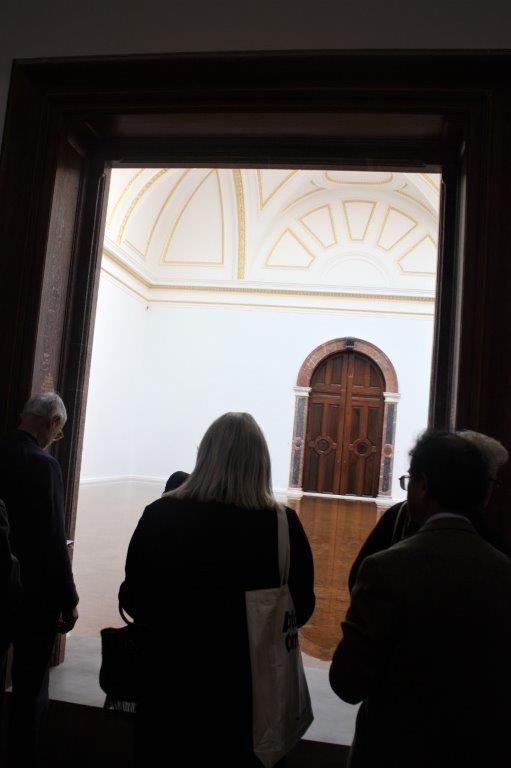 Mesmerised by the installation Host.

The seawater consignment had been dished up off Portland Bill, the southernmost point of Dorset known for its operational Trinity House lighthouse, and has been fed into an installation Gormley names Host. This contrivance is what the artist sees as “an invasion of the inside by the outside.” Gormley seems at his most innovative when working in the open: he has for instance a concurrent exhibition on the Greek island of Delos.

One of several works on a monumental scale now open to public view, Host evokes the depths from which life emerged. Gormley has delved into the resource of the globe’s second largest ocean to further his affirmation of the significance of the human body – which he describes as a place of experience, emotion, consciousness, memory and imagination. And of course, human beings are 75% water. 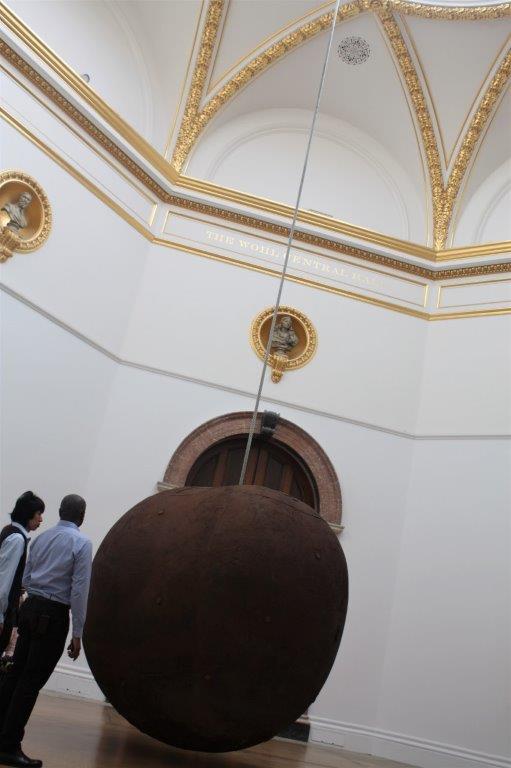 Host is a living composition: its colouration will change as the hours of autumn daylight diminish.

The Royal Academy has put on a hugely ambitious exhibition of specially created Gormley installations alongside highlights from a 45-year career. Gormley makes use of the scale and light afforded by the architecture of each of the 13 main RA galleries, and there are plenty of surprises. For the RA, this is a follow-up to the loan of its space to two other contemporary giants, Ai Weiwei and Anselm Kiefer.  Gormley is known for landmark public sculptures, such as the 20 tonnes Angel of the North near Gateshead in northeast England, and casts of his naked body which are installed around the world from Crosby beach on Merseyside (across 3.2km, 100 of his body-casts look out to sea) to the Austrian Alps, and a 2009 project involving 24,000 members of the public for Trafalgar Square’s the Fourth Plinth. 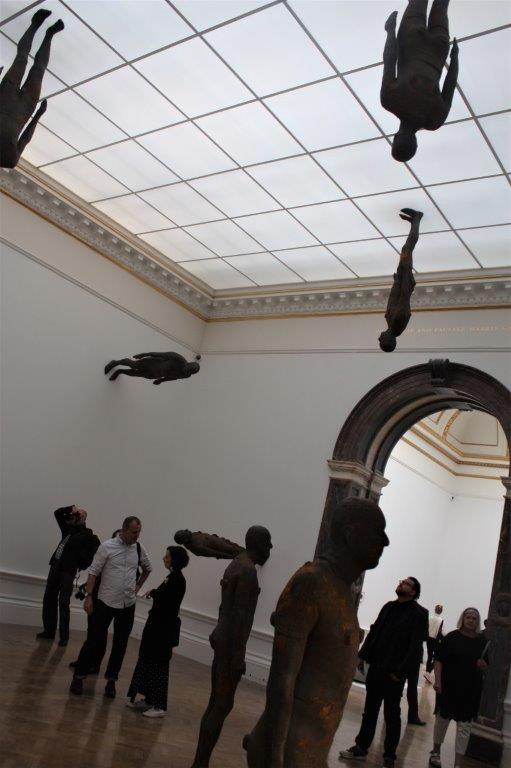 In a wider context, Gormley’s appropriation of outdoor sites for his large sculptures is reminiscent of the Bulgarian-born artist Christo, whose canvas is great public edifices which he loves wrapping in recycled fabric.

Most stunning of the latest Gormley spectaculars is the flooding with water and mud to a depth of 23 cm of a 19th century gilded gallery. The effect, with the reflections of the elegant interior architecture quivering in the waters, is rather like viewing a lake in front of a Moorish palace. 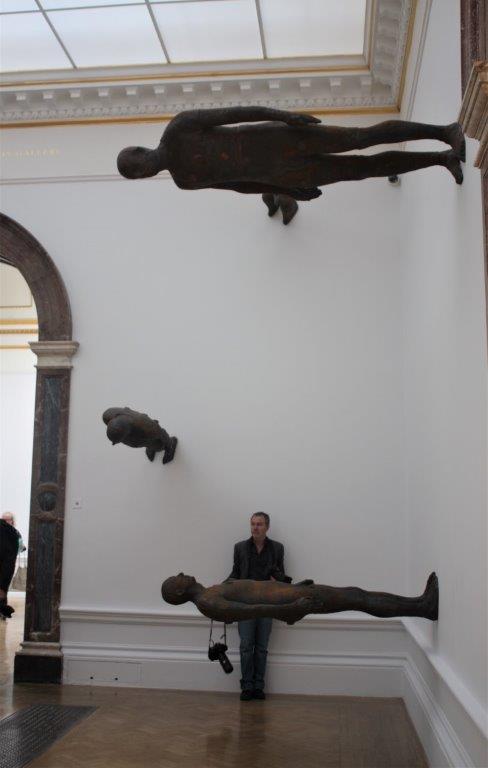 The exhibit is for visitors to gaze at and not to dip into or lean through the doorway, and a member of the gallery staff is posted nearby to restrain them from the temptation of dunking their fingers.

With this stunning conception, Gormley returns to the organic after his industrial forays seen elsewhere in the exhibition. Seawater is one of a vast range of materials used throughout. They include aluminium, iron, hand-beaten lead, steel and wood.

Some of the exhibits in whole-room installations need to be cautiously circumnavigated. “We are negotiating them with our own bodies,” says curator Martin Caiger-Smith, a senior member of the Courtauld Institute. 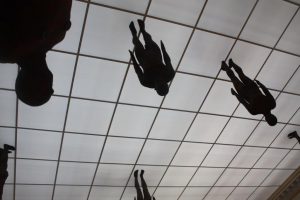 One such that requires careful footsteps to find one’s way through or around is a version of Clearing, in which 11km of square section aluminium tube has been coiled and allowed to spring out until stopped by the parameters of the room. Clearing VII ends up in looking like a child’s enormous scribble or the sub-atomic paths of electrons. The work according to one description has become a spatial field which is invisible yet charged.

Martin Caiger-Smith said that after all the construction work that has been going on, it was a change to welcome visitors who were not wearing yellow hard hats. The show as mooted four years ago, and since then, in engineering “the extraordinary transformation” of the space for technically daunting works “we have redone it and redone it. It has been a big challenge, and we answered that challenge.”

Gormley’s overarching theme is the body – the body’s relationship to space and in the built environment, this time brought indoors. His aim is to encourage visitors to slow down and become aware of their own bodies. There is a deliberate strategy of not “walling off” the sculptures from the public – it is a kind of test site and you are among the first to test it, says the curator.

Filling one gallery, Lost Horizon I has 24 life-size cast iron figures that have been generated from six moulds of the artist encased in wet plaster. Some of the bodies are fixed horizontally to the walls, some are suspended from the ceiling. “The bodies lying are horizonal – we are the verticals,” says Martin Caiger-Smith of the different orientations which are “challenging the perception of which way is up.”

Cave is a new sculpture of giant proportions – cuboid structures of steel which together make a human form lying on its side, although close-up that is difficult to appreciate.  It can be entered – to encounter echoing, claustrophobic darkness – or navigated from outside. Gormley seeks to heighten a sense of bodily and spatial awareness of the people moving through it.

In the Central Hall are two of his early works: Body and Fruit, from 1991-93.  These weighty hollow pieces based on a silhouette in a clasped diving position have the characteristics of both body and fruit. Body weighs 6 tonnes, and Fruit 1.25 tonnes, and they are suspended to hover centimetres above the floor.

The exhibition begins with what are called Slabworks made from thick glass-cut slabs of weathering steel with the body conceived in Cubist forms. Through constant tension between the figure of the body and this interpretation of the body, various physical attitudes can be traced – even a despondent one right in the corner. Among other purposes, it is meant to questions the way we stand. In the largest gallery, Matrix III is a vast cloud of hand-welded mild steel mesh, the type commonly used to reinforce concrete walls. Suspended (just above head height) are 21 intersecting room-sized cages with a void at the core which Gormley calls “the space of dreaming.” He says the optical maze is “the ghost of the environment we’ve all chosen to accept as our primary habitat.” Pictured here by photographer Charles Duprat is the earlier Matrix II in a 2014. installation view at Galerie Thaddaeus Ropac, Pantin, France, copyright the artist.

The gallery has to warn: “If you are sensitive to enclosed spaces, one of the works may not be suitable for you to enter. Please ask a member of staff for the best route around. Some of the works contain water, sharp edges and materials that can transfer onto clothing.” Interspersed with the blockbusters are some of the rarely seen and often sparse early works from the 1970s and 1980s, which led to Gormley using his own body as a model for new creations.

In vitrines are many of his pocket artist’s books and drawings. Some of the workbooks contain sketches for completed works, others hint at ideas which have yet to take form – it could be another 10 or 15 years before we shall have an opportunity to see these works, said Martin Caiger-Smith, who was assisted fin curating the exhibition by Royal Academy curator Sarah Lea. 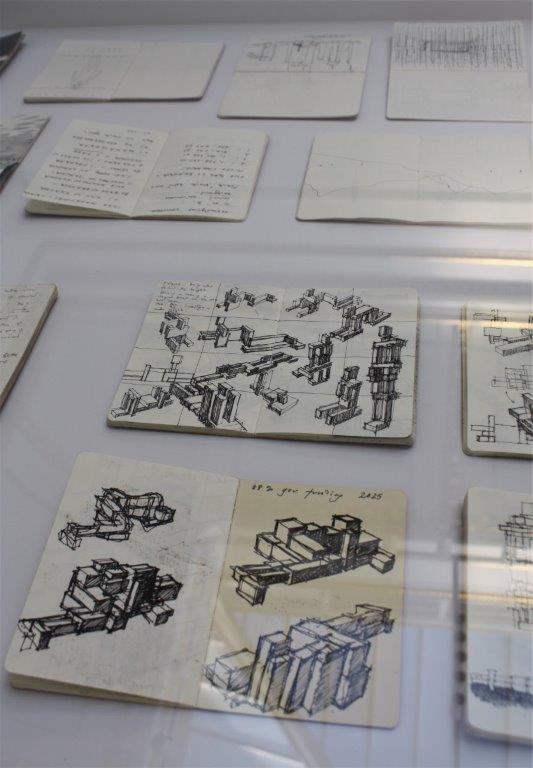 One of the artist’s workbooks.

Simultaneously, Gormley has an exhibition (until October 31, 2019) named Sight on the sacred island of Delos, part of the Cyclades archipelago. The publicity says that he is probably the first artist to exhibit new work in the location since the island – which myth had it was the birthplace of Apollo and Artemis – was inhabited by humans long ago.

Gormley repopulates the island — both at its periphery and its archaeological sites – with his ‘bodyforms’, 29 cast iron sculptures made during the last 20 years, including five new works.

He says that in this way he is transforming the traditional statues and totems that once adorned ancient public squares, temples, and private dwellings into sites of empathy and imaginative projection. Exposed to the elements and interacting with the island’s topography, his sculptures “appear and disappear.”

Delos is a boat journey away from Mykonos, Paros or Naxos. Staged in collaboration with the Ephorate of Antiquities of Cyclades on Delos and its museum, the exhibition is curated by Iwona Blazwick, director of London’s Whitechapel Gallery, and Elina Kountouri, director of NEON. Founded in 2013 by collector and entrepreneur Dimitris Daskalopoulos, NEON is a non-profit organisation committed to broadening the appreciation, understanding, and creation of contemporary art in Greece. 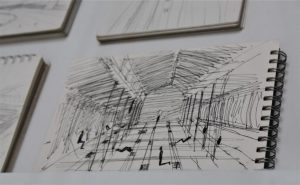 Antony Gormley exhibition at the Royal Academy, for which lead supporter is BNP Paribas and further support comes from the White Cube galleries and Blavatnik Family Foundation, runs until December 3, 2019.

Dry falls further and Wets look peculiar; the drums of war can be heard…