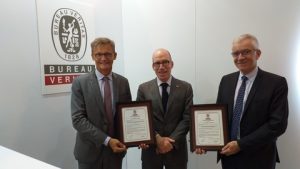 Paris-La Défense, France, September 19th, 2019: GTT – the LNG containment system designer has received approval in principle (AiP) for its Mark III Flex system today at Gastech 2019 in Houston. This membrane cargo containment system (CCS) is an evolution of the GTT Mark III Flex technology specifically designed and modified for Arctic operations. A certificate was provided to Philippe Berterottière, GTT’s Chairman and CEO by Matthieu de Tugny, the President of Bureau Veritas, Marine & Offshore at a ceremony on the Bureau Veritas exhibition stand at Gastech.

Speaking in Houston, Matthieu de Tugny commented: ‘It is always a pleasure to hand over such a certificate and with GTT it is a regular occurrence as their systems continue to evolve and develop to meet the performance requirements of today’s market. We are proud to continue helping the development of their containment systems and of arctic related technologies and their application.’

Philippe Berterottière, commenting said: ‘We are very happy to be granted this approval by Bureau Veritas. We are proud to be able to adapt our technologies to meet the arctic maritime challenges. ’

Mark III technology is a cryogenic liner used to contain liquefied gas at low temperatures during shipping, onshore and offshore storage, at atmospheric pressure. With the benefit now of more than 55 years of GTT systems in service experience, the insulation solution provided by the Mark III Flex Cargo Containment System reduces the daily guaranteed Boil-Off gas rate to 0.085% of tank volume. The Flex system is well proven with 66 LNG carriers and 1 FSRU already in service with the Mark III Flex since its introduction in 2011.

The evolved system was tested extensively in a Krilov technology facility in Russia to demonstrate the suitability of Mark III Flex for use in navigation in ice infested waters. This follows similar testing for GTT’s NO96 used for the first 15 Yamal LNG carriers – all classed by Bureau Veritas.

BV approved the system for the Arctic application following the results of the vibration and acceleration tests performed by the Russian institute on the request of GTT. The vibration/acceleration calculations are made to simulate the behavior of the system when the ship is involved in ice breaking operations.