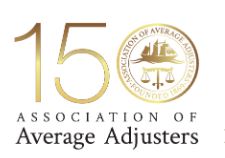 A call for London market insurers to become more closely involved in decisions on casualty salvage was sounded during the autumn 2019 seminar of the Association of Average Adjusters, as it was said that many parties continued to misunderstand the key salvage contract Lloyd’s Open Form.

The September 3 event, jointly organised by the AAA and the International Underwriting Association, reflected industry worries by focusing on “dispelling the myths” about the contract, which has suffered a decline in take-up.

The meeting heard that even staunch advocates of LOF were tempted to deal with marine emergencies by means of bespoke amendments to LOF or alternative commercial terms.

In the light of the disquiet, Paul Cunningham, marine and energy claims manager for Talbot Underwriting, suggested that London practitioners consider the approach of international insurers elsewhere who arrange contracts on behalf of their assureds and negotiate directly with salvors.

Mr Cunningham said: “I accept that some of these people [insurers in other markets] may be accused of causing the current problems with side-agreements and attempts to mitigate an LOF contract, but they actively involve themselves in any casualty their owner has. This is something we aren’t very good at in London.”

The salvage sector contends, however, that the incidence of side-agreements should not be exaggerated. 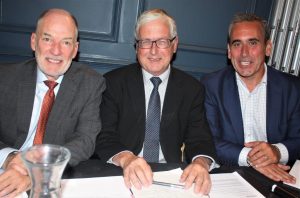 From left, Roger Evans of the International Salvage Union, Richard Cornah of the Association of Average Adjusters, and Paul Cunningham of Talbot Underwriting

Mr Cunningham said: “I feel that London insurers should not be the ones to take the decision, but we should be assisting and supporting our owners by providing them with upfront claims procedures [from specialist bodies] who have full knowledge of tugs and kit available in most locations around the world and are therefore able to provide straightforward commercial assistance and guidance to owners.”

He said: “If a commercial contract and terms can be agreed in good time, so be it, but if the vessel does need emergency LOF assistance, then this is what should be done and hopefully insurers can take comfort around the arbitration process, but it will only be with effort and time, that benefits will be seen.”

The “no cure, no pay” form entails remuneration for salvors based on arbitration administered by Lloyd’s Salvage Arbitration Branch.

A robust defence of LOF was presented at the seminar by Roger Evans, secretary general of the International Salvage Union (ISU), which represents salvage companies. He echoed the need for “cooperation instead of polarisation” but warned that many operations were already unviable for salvors. He asked the audience to imagine a scenario in which Lloyd’s decided to wash its hands of LOF, generating the risk of “tsunamis” of repercussions for shipping businesses.

Mr Evans highlighted the costs of running a professional world-wide salvage response in a declining (clean) LOF market. He said that the top three salvage companies start each year with a combined overhead of $100m running costs. There had been a fundamental shift downwards in revenues, “and the pre-tsunami tide has gone right out!” Without LOF, “when you have a big [casualty] what are you going to do?”

Mr Evans said that instances of side-letters were infrequent – Lloyd’s had only one case reported this year.

The Lloyd’s Standard Form of Salvage Agreement usually known as Lloyd’s Open Form originated more than a century ago and has been revised on occasion. Mr Cunningham said the LOF is supposed to be a stand-alone and all-encompassing contract when once signed, salvors should be able to go about their job, but any use of side-letters or agreements incorporated into the salvage contract raised concerns.

The Talbot claims expert, who is the marine claims representative on the London Joint Hull Committee and marine property representative on the Lloyd’s Salvage Group, said that any such side-letters would negate the underlying nature of the LOF contract and, depending on time taken to negotiate, could lead to escalation of damage to the property and create further liabilities in the event of a potential wreck removal.

Mr Cunningham said that if London insurers built closer direct relationships with their shipowning clients, they could avoid situations such as being notified by a broker of an LOF signing only after salvors had mobilised.

Insurers were also concerned, he said, at being unable to quantify their financial exposure once an LOF is signed. “This in itself creates its own Catch 22 in so far as insurers then look to negotiate their way out of an LOF, which stops the arbitration process and stops the arbitrators seeing enough spread of LOFs to start getting an element of certainty as to what each LOF case should be worth.”

He said that between 2010 and 2018, there were 645 LOF cases and while arbitrators were appointed on over a third of those cases (267), awards were only reached or published on fewer than 15%. “I would ask, how can there be consistency with awards, when so few are arbitrated to conclusion?”

Mr Cunningham stressed: “I am a big supporter of LOF, but, and it is a big but, the form has to be used for the true purpose behind its invention and intention.  If a vessel is in dire straits and needs substantial salvage equipment and services, then LOF is the absolute go-to contract that should be used.”

Another worry was that LOF could be abused by salvors for non-emergency cases when a casualty could be dealt with via a commercial tow or other fixed price arrangement. He said there was a recent attempt to develop a new ‘LOF Light’ contract which would be used in cases such as rescue tows and simple groundings.

Mr Evans insisted that salvors were often the last line of defence; the incident has occurred, and the underwriter is exposed, so to fail to make best use of what salvors offer to mitigate a higher exposure just does not make sense. He reiterated that ISU supports and promotes the use of unamended LOF as the main emergency response contract and that it did not support any ‘LOF Light’.

He maintained that “the so-called non-emergency cases where LOF is used suits most shipowners as a good contract basis. However, in my view in these such cases the award should be comparable to a commercial terms basis with minimal enhancement to take into account LOF terms and conditions; but this is down to the arbitrator system understanding the needs of the current market and what is available on commercial basis.”

He declared: “The background of the basic principle of salvage is recognising that assistance when rendered is to be compensated as per Article 13 [of the International Convention on Salvage, criteria for fixing the reward] and encouraged and yet proportionate.”

Mr Evans cited advantages of LOF both for shipowners and salvors. These were a recognised contract of just two pages, rapid response, and initial costs and liabilities to be shouldered by the salvor (unlike in normal commercial contracts). Security could be achieved within 21 days of completion and the salvor had substantial liens on the salved property to enforce any claim. Awards were based on an agreed salved value of ship and cargo, with cargo interests often paying a large or the largest part of the final award.

Salvors gained the encouragement of an award on successful completion, a legal requirement and one which was based on fairness and certainty.

There was a ‘safety net’ for salvors in the Special Compensation P&I Club (Scopic) clause, and a pre-agreed tariff set of daily rates. The salvor receives initial salvage security of $3m, and there is a discount penalty provision in favour of the underwriter. Owners or P&I clubs can appoint a Special Casualty Representative on site to monitor operations.

Mr Evans believed that the proposals for side-letters were coming from underwriters, as salvors amid the competitive state of the industry tried to get what they could, “and I am sure that is on the slippery slide downwards.” He said: “Consolidation of the salvage industry is a big concern I think for the business here.”

There was insufficient appreciation of the importance of immediate and decisive action at the outset of an emergency. With bigger ships in the merchant fleet, there were big liabilities, “and that is only going to increase.”

Mr Cunningham raised what he saw as the prospect of the 2020 regulations limiting the amount of sulphur in ships’ fuel oil opening the potential for more cases of engine failure with ships drifting at the mercy of weather. This was “an insurer’s worst nightmare, but possibly… a salvor’s cash cow!”

Richard Cornah, chairman of Richards Hogg Lindley and chairman of the Association of Average Adjusters, presided at the London meeting. He reminded the audience that the idea of salvage was relatively new compared with other maritime legal concepts and was established from case law, developing over the years together with the process by which salvage awards should be established. “That process is still evolving today.”

Mr Cornah, who has been the Association representative on Lloyd’s Salvage Group since the mid-1990s, hinted that the concerns raised during the event were being evaluated by senior industry figures: “We are halfway towards an LOF 2019 possibly.”

Lloyd’s Register signs up to Getting to Zero Coalition.