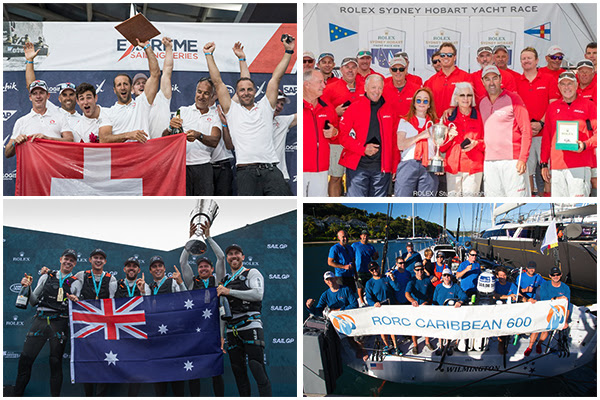 World Sailing is pleased to announce a star-studded list of nominees for the 2019 Hempel Team of the Year Award, with entries from Australia, Switzerland and the USA in the running.

Switzerland’s Alinghi, the Australian SailGP Team, Wild Oats XI of Australia and the American boat Wizard all feature on the shortlist following their success over the last 12 months of high-performance international competition.

The Hempel Team of the Year Award celebrates teams of two or more sailors who personify the sporting values of integrity, ambition, resilience and resourcefulness.

The judging panel will vote on the winner before they are announced on Tuesday 29 October 2019 at the World Sailing Awards in Bermuda.

More information on the teams and their achievements over the past 12 months is below:

Following Alinghi’s creation in 1994, the Swiss team have enjoyed global success including victories at the 31st and 32nd America’s Cup. Spearheaded by Ernesto Bertarelli and Arnaud Psarofaghis, the team continued to add to their trophy cabinet in the D35 and GC32 with global regatta victories at the end of 2018 and throughout 2019.

Alinghi’s success in the GC32 continued in 2019. They started the GC32 Racing Tour with a second place in the Villasimius Cup before winning the 2019 World Championship in style with eight victories during the 18-race series in Lagos, Portugal. A second place followed at the 38th Copa del Rey MAPFRE before another victory at the GC32 Riva Cup. After four events they are poised to claim the series win.

And in the 16th and final season of the D35 Trophy, Alinghi triumphed for the eighth time, winning four of seven events to take the silverware.

At the series opener on their home waters in Sydney, Slingsby and his team of experienced America’s Cup, Olympic and Ocean Race sailors controlled the fleet of six and defeated their nearest rivals, Japan’s SailGP Team, skippered by Nathan Outteridge.

Further success followed for Slingsby in San Francisco before the Japanese team hit back with an event win in New York. The Australian team then returned to the top of the leaderboard by winning their third event in Cowes, Great Britain, booking them a place in Marseille’s million-dollar Match Race Final where they faced familiar foe Outteridge and his Japan team.

At the beginning of the race, Slingsby and the Australian team handed the Japanese an advantage after receiving a penalty for entering the start box early, but soon caught up with their rivals. Outteridge then looked to force a penalty on Slingsby which backfired, handing the Australians a lead that they never relinquished to win the SailGP Season 1 trophy and US$1 million.

Wild Oats XI continue to set the bar in the Rolex Sydney Hobart Yacht Race and in 2018, Mark Richards’ team of 20, which includes some of the world’s most talented and applauded sailors with backgrounds in the America’s Cup, Olympic Games and The Ocean Race, won the coveted line honours title for the ninth time.

Retirements in 2015 and 2016, followed by a one-hour penalty in 2017, saw the famous Wild Oats XI miss out on the line honours title that they had won a record eight times the ten years prior. But in 2018, alongside navigator Juan Vila, Richards and the crew put that three years of misery behind them.

The team were locked in a four-way battle between Black Jack, Comanche and InfoTrack throughout the 628 nautical mile race.

Up until two hours before the finish, the race was still wide open, but Wild Oats XI managed to put enough distance in between themselves and their rivals to win by less than 30 minutes and extend their winning line honours record.

David and Peter Askew’s team on Wizard have enjoyed a highly successful 2019, dominating the offshore circuit.

Skippered by Charlie Enright, the team featured offshore veterans such as Will Oxley, Richard Clarke and Mark Towill and won the 2019 RORC Caribbean 600 Trophy, scoring the best corrected time under IRC. Their near-faultless performance saw them complete the 600-mile non-stop race in 43 hours, 38 minutes and 44 seconds.

With success in the Caribbean under their belt, they headed to Europe in search of Rolex Fastnet Race honours. Sailing in the West to East Transat Race, the team fought SHK Scallyway for line honours, a boat some 30 feet longer than Wizard.  Although they fell just seven hours short during the ten-day sail, Wizard’s speed was enough to claim a comprehensive IRC 1 victory.

Enright, Towill, Oxley and the team continued to sail immaculately and at the Rolex Fastnet Race they again fought larger boats to punch above their weight. The power of Rambler 88 eventually came through, but Wizard were once again crowned IRC overall winners, marking an unrivalled period of offshore success.