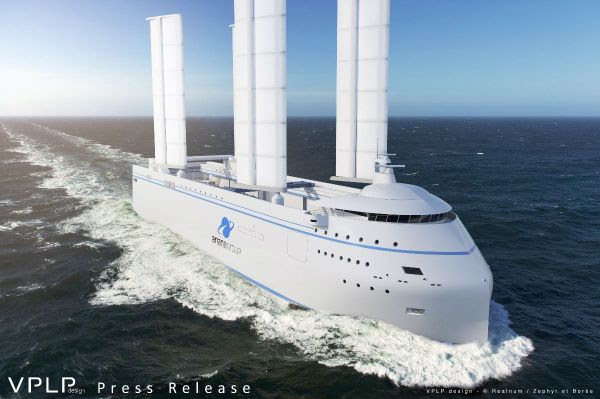 The naval architecture firm has reached a new milestone with the development of a 121-metre-long RORO vessel for transporting components of the Ariane 6 rocket from Europe to French Guiana. Equipped with four Oceanwings®, the vessel is designed to have the least impact possible on the environment.

This is a major milestone in the history of VPLP, the design firm founded in 1983 by Marc Van Peteghem and Vincent Lauriot-Prévost. After competitive sailing, cruising and yachting, the firm has turned its attention to a new sector: maritime transport.

ArianeGroup, the primary contractor for the Ariane launch vehicle, put out a call for tenders concerning the transportation of the various parts of the new Ariane 6 launcher from Europe to the launch pad in Kourou, French Guiana. The contract to build was awarded to the maritime company Alizés, a joint venture between the offshore services specialist Jifmar and Zéphyr & Borée , a young maritime company specializing in carbon-free transport. 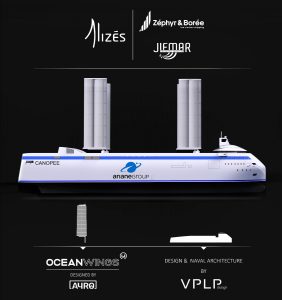 VPLP Design  was entrusted by Alizés with the task of designing a ship – named Canopée – in accordance with the specifications of the project. The design firm came up with a RORO vessel which is 121 m long and 23 m in the beam, and features a bridge in the bow and an open deck aft with high sides to protect the cargo.

Designed by VPLP, Oceanwings® are automated and reefable soft wingsails associated with a routing system developed separately. A new company, Ayro , has been set up for the specific purpose of developing Oceanwings®. 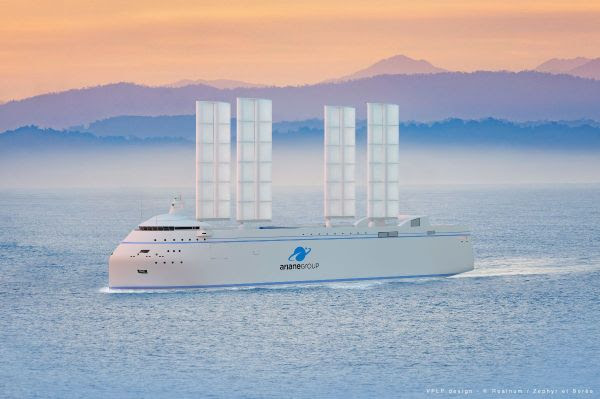 For VPLP Design, this project is the fruit of a long period of gestation which began with the firm’s collaboration with BMW Oracle and victory in the 2010 America’s Cup with a trimaran featuring a rigid wingsail. This experience left Marc Van Peteghem with the firm conviction that the expertise gained in the world of yacht racing could be applied to innovating maritime transport. “Shipping is facing new challenges, because it alone is responsible for 5% of greenhouse gasses, a figure that is set to double by the year 2050. Pressure from institutions and the general public for clean transport is increasing and stricter regulations are coming into force.”

And the focus isn’t just on cargo vessels, because VPLP is already looking into passenger ferries equipped with hydrofoils: “Thanks to foils, we can reduce fuel consumption by 30% to 35%,” says Marc Van Peteghem.

With experience, expertise and industry-specific tools, VPLP is placing its services at the disposal of the global effort to achieve carbon-free maritime transport, working in collaboration with established forces.