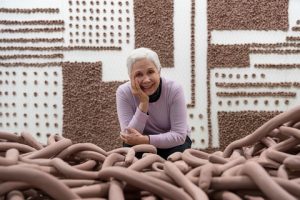 Crossing the Atlantic in the early 1950s on a passengership that rolled and pitched unnervingly was a daunting experience for a 12-year-old girl who with her mother and sister were seeking to put behind them the poverty of their life in rural Italy.

The turbulent voyage to Venezuela affected Anna Maria Maiolino to this day, heightening her sensitivity to the fate of all migrants.

She is now as one of Latin America’s leading contemporary artists having her first UK retrospective at London’s Whitechapel Gallery, with images that, entwining love and revolution, are sometimes stark and shocking.

What is Left Over.

Anna Maria Maiolino: Making Love Revolutionary speaks of the Calabrian-born artist’s irrepressible spirit. Many of the works were inspired by her coming of age under military dictatorship in Brazil. The courageous, radical Anna Maria relives her 60 years of navigating society’s political and cultural currents, at a time when Brazil again remains uneasy, under its elected right-wing president Jair Bolsonaro.

Maternal love can be revolutionary, she insists, just as is resistance to oppression and bursting the constraints of her upbringing by coming to terms with a new language, as she had to do.

The exhibition title originates in Anna Maria witnessing the defiance of the Mothers of the Plaza de Mayo, a group that from 1977 gathered every Thursday in front of the presidential palace in Buenos Aires, where she was living at the time. In those demonstrations, previously non-political women demanded of the military dictatorship disclosure of the fate of their children who had ‘disappeared,’ most of whom had been tortured or murdered. 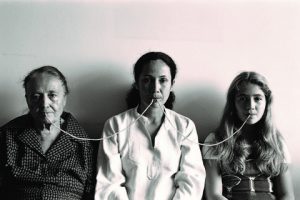 Anna Maria interpreted what was happening as mothers’ love turning revolutionary in a visible, unexpected and dynamic political force.

Her video and performance works from the 1970s and 1980s form a considerable part of the Whitechapel display. She was later to move to São Paulo, Brazil, where beyond the radar of the military regime (which lasted from 1964 to 1985), she created works expressing revulsion at repression and hunger.

Anna Maria reacted to the stifling regime of censorship and state terror through such manifestations as In-Out Antropofagia (In-Out Anthropophagy), a 1973 film in which the mouths of a man and woman are taped shut, as they smile, try to speak or are  fed with string.

Further parodying the violence of dictatorship, É o que sobra (What is left over) from 1974 shows the artist threatening to use scissors to cut out her eyes, tongue and nose. This is “a very powerful image of resistance,” said Iwona Blazwick, director of the gallery. She explained that the nature of performance art, involving a small group of people, escaped the full attention of the authorities in that people were more difficult to pin down and arrest than those who pursued more graphic art forms.

In Por um Fio, da série Fotopoemação (By a Thread, from the series Photopoemaction) from 1976 in her “photo–poem–action” series Anna Maria examines the genealogy of the female line by chewing the same thread which links her mouth to those of her mother and daughter. This aims to show relationships strengthening her path of liberation, individuation and the determined conquest of a woman’s right to speech.

Meanwhile, with clay, paper and ink Anna Maria constructs objects rooted in human conditions such as longing and motherhood, fragility, language and resistance. 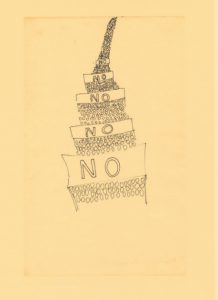 When at the age of 18 she settled in politically unstable Brazil, her linguistic passage from Italian to Portuguese engendered an enduring fascination with identity.

Studying in Rio de Janeiro, she began making woodcuts in the technique and figuration of craftsmen and women of the country’s northeast region. Early prints on display in London include Glu Glu Glu (1967), in which an open-mouthed figure sits at a table spread with food.

In the late 1960s Anna Maria moved to New York with her husband, the artist Rubens Gerchman (1942-2008). Unable to speak English and busy as mother and wife, her artistic work was limited although she had contact with visiting Latin American artists. Following an invitation to attend the experimental New York Graphic Workshop in 1971, she left her husband and returned to Brazil to create her most radical works.

In all, Whitechapel Gallery brings together 150 works, many on display in the UK for the first time.

From the series Phylogenetics.

The presentation begins in the optimistic vocabulary of the artist’s works since 1990. She is making a new installation of unfired clay, rolling and stacking hundreds of raw shapes, evoking traditional women’s labour such as kneading bread or housework – “art as a form of nourishment.”

The exhibition culminates with a performance work Entrevidas (1981), from a time when the stirrings of democracy allowed advances in public art. She scattered a carpet of eggs on the ground and wearing a blindfold walked barefoot among them as if in a minefield. It was a literal reference to walking on eggshells. The egg, as a symbol of primal form and perhaps love and regeneration, recurs in the final room of the exhibition.

The exhibition is conceived and organised in collaboration with PAC Padiglione d’Arte Contemporanea in Milan, where it was presented from March 29 to September 1, 2019 with the title O Amor Se Faz revolucionário and curated by Diego Sileo. The Whitechapel Gallery presentation is curated by Lydia Yee and Trinidad Fombella with Inês Costa.

Less than two days till the verdict!

What a week that was with the BDI@1,924 and Armageddon advancing further…