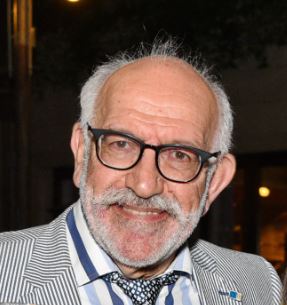 The BDI (Baltic Dry Index) lost a point and now stands at 1,801 points despite the upwards Capes’ mode as all other indices fall. Very cynically, unless we see a war – any war, which we believe that same will be by 60 percent an economic war and 40 centum involving armed forces, we aren’t going to see any prospects in the markets and conversely in Shipping and its investors… John Faraclas’ brief daily recap:

You might be surprised to read the above preamble but that’s the harsh reality: “War Father of All; if you don’t destroy you cannot rebuilt” this is the pitiful message from history which we have many times referred to!

With Planet Ocean’s debt now above the US$ 250 (twohundredandfifty) trillion, who is gone to pay this colossal damage? Imagine the World without the Second World War… In shipping the product of the Second World War was the long period timecharters of the 50’s, 60’s and 70’s to rebuilt the world; end of the story

The Wets also in a falling mode; the last published BDTI (Dirties) and BCTI (Cleans) stood at 1,101 – minus 43 and 721 – minus 12 points respectively; and unprecedented fall following a short live euphoria…

We are pleased also to present you a small but interesting report by VesselsValue on Containerships:

VesselsValue has just added Containers to the list of vessels covered by their Trade module. This means that users can now analyse cargo mile demand and see underlying vessel journeys and stoppages for the global fleet of Containerships.

Adrian Economakis, COO, looks at key data to determine which are the most attractive segments for owners and investors, and where the market as a whole, as well as values may be going in the next few years.

“Our Container trade service provides a data driven approach to understanding Containership demand, updated in real time and derived from individual vessel journeys. Combine with supply analysis and you have a deep insight into the fundamentals of the different container segments”

The Containership market has been showing some significant gains across both earnings and values, particularly in the Post Panamax and New Panamax segments.

The US China trade war has had a negative impact on vessel demand.

In terms of values, it’s been very much a split market, with larger container vessels significantly outperforming the smaller types.

The best demand and supply fundamentals in the Containership market are found at Post Panamax and above sizes.

The Panamax sector is somewhat of a mixed bag. Historically, demand and supply fundamentals have been poor, with demand falling at faster rates than the shrinking supply of this vessel type.

The data for the smaller types is generally less positive, with supply growth generally exceeding demand, slightly falling values and less theoretical upside that the Panamax sector based on the position in cycle and macro-economic forecasts. 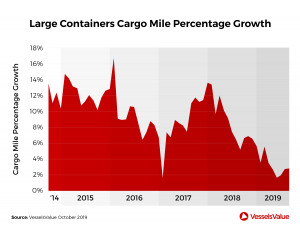 Demand growth in terms of total TEU capacity of the large Container fleet being utilised has been strong.

Over the past three months demand has grown by 2.3% versus a growth in vessel supply by total TEU capacity of 1.7%.

This has certainly been one of the drivers for the significant rise in charter rates over that period. However, on an annual basis, supply growth at 4.9% has outpaced demand growth at 3.3%.

Over a five year period, demand and supply have been pretty well balanced with demand growing at 33.5% and supply at 33.1%. 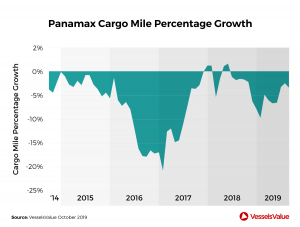 Over the past 3 months, demand for Panamax Containerships has grown at a healthy 2.1% while supply has shrunk slightly by 0.1%. However, over a longer history, the reverse is true with demand shrinkage generally outpacing supply reduction. Over the last year, Panamax TEU demand has falling by 5.6% while TEU supply has only fallen 1.3%. Over the past 5 years demand fallen 36.6% with supply falling significantly less at 22.1%. 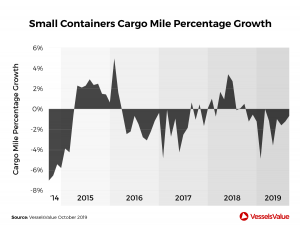 Small Containerships (Handy size and below)

Demand is derived from VesselsValue’s ‘activity’ and ‘trade’ data, derived from aggregation of daily updated vessel cargo operations related stoppages and related individual vessel journeys. Supply from looking at the capacity of the on the water fleet of vessels at each corresponding time period (3 months, 1 year and 5 years related percentage changes).

The Geopolitical mess continues in all fronts; MIGRANTS still on top and with the Essex lorry despicable deaths tougher controls should be in place worldwide…

BREXIT still on and let’s see what the 12 of December brings up as Boris Johnson and Jeremy Corbyn  are being “tipped” as unfit to become prime ministers from Lib Dem leader Ms Jo Swinson who believes that given the state of affairs, she might become prime minister; can you imagine this happening..!

The faulty line from Gib to Afghanistan  and from the Caucuses to the Horn of Africa with at least ten hot spots will give both earthquakes and tsunamis… This will draw forces to challenge the Planet Ocean’s dire straits…Imagine eh! Mind the megalomaniac Turkish president who puts World Peace at stake. CAUTION!!

At the other side of the Atlantic the news look for a box office record film given what we learn about the Ukrainian issue with president Trump and the Bidens. A testimony by a decorated veteran colonel sends shocking waves around – to the middle man in the street. Let’s see how the president counters… 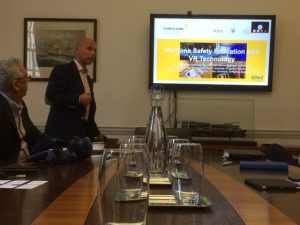 On another tone and note we had an excellent lunch time slides presentation with interesting points by Prof. Evangelos Markopoulos and Mika Luimula from the TURKU AMK at Lomar’s London offices– a preamble, let’s call it, of something exceptional coming up in maritime education and training with exceptional virtual reality means for safety on board ships. Interesting and ergonomic equipment greatly contributed to this presentation as almost all from the ten participants try it! Virtual Reality for Maritime Safety is more than important! 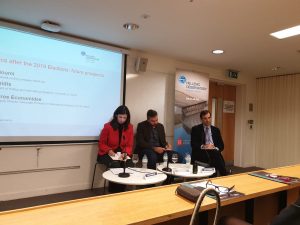 An interesting debate with 70 delegates at the Hellenic Observatory at the LSE earlier on tonight about Greek Politics after the 2019 elections: future prospects. Two speakers, Maria Karaklioumi, Political Analyst at polling company RASS SA., and Spyros Kosmidis, Lecturer in the Department of Politics and International Relations, University of Oxford with an experienced moderator / chair: Spyros Economides, Associate Professor of International Relations and European Politics, LSE; Deputy Director of the Hellenic Observatory. 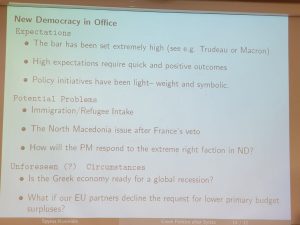 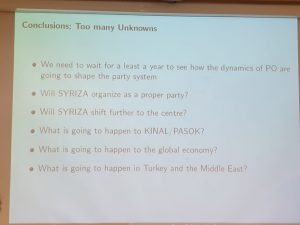 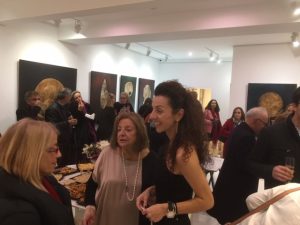 l to r: Anny Zade with Varvara Roza and her mother (in the centre)

Finally we managed to attend the private view of Maria Chatzilampou’s  first solo exhibition in London presented by the Varvara Roza Galleries at the J/M Gallery in London’s popular landmark street: Portobello Road. Over a hundred guests attended.

Exceptional technotropy for her difficult subject/theme of her work: “Tree – Symbol of Fertility and Growth”  was observed. Her style is characterized by the quality of monochrome and emotional intensity with proportionally large paintings which include imagination in a dreamy and metaphysical implication; these paintings do inspire and take you “out from the box”; excellent!

The exhibition will be on until the 5th of November. opening time 11am – 6 pm Monday – Thursday and 11am – 8pm Friday and Saturday.

That’s all for tonight, more news tomorrow; until then have a nice evening and continue to remain on guard from actions emanating by Pirates, Terrorists, Criminals and any Business Hooligan whatsoever wherever you are on Planet Ocean!

‘Only one justification’ for fresh ECB QE, Libra: Practicalities, technology, and the future of payments