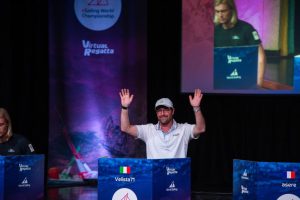 A new eSailing champion was crowned live in Bermuda as Velista71 (ITA) took the 2019 title at the eSailing World Championship Final, at World Sailing’s Annual Conference.

Showing consistency throughout the final, Velista topped the group of eight finalists following seven preliminary races, before sailing a smooth double-points Medal Race to ensure the title was his.

Amongst the line-up were several familiar faces. The inaugural eSailing World Champion in 2018, L1 (FRA), made the final shortlist once more, joined by teammate LaMerNoire, a former world number 1 who was eliminated after the preliminary round last year.

HAVUC (TUR) dominated the qualification rounds to make the final once again, while elsewhere, up-and-coming real-life Dutch 49er sailor Bart Lambriex proved he was just as competent in the virtual world as he is on the water by earning his spot in the final.

The oldest finalist, Australia’s 1stloser, and the two youngest finalists, asere (FRA) and SNPJ Luca 56124 (ITA) made up the eight best eSailors across the globe.

Seven preliminary races were held, in a variety of boats across a range of locations:

The final preliminary race, broadcast live, was contested in the 49er in San Francisco, with the Medal Race showcasing the eF50 – the virtual version of SailGP’s F50.

Velista71 only won one of the seven preliminary races, but did not finish any lower than fifth, with two second and two thirds along the way.

Two eSailors were eliminated before the Medal Race. Once again, LaMerNoire fell at the final hurdle and failed to qualify for the final showdown – and he was joined surprisingly by L1, who would not be able to defend his title.

Throughout the Medal Race, Velista71 had to keep a keen eye on his closest rivals; asere was just a point behind him, and in fact, every competitor apart from HAVUC was mathematically able to win the title.

The Italian managed his race perfectly, deciding not to mount a challenge on race leader SNPJ Luca 56124 and instead focusing on maintaining his position ahead of his nearest challengers.

With SNPJ Luca 56124 winning the Medal Race to seal bronze, Velista71 crossed the line in second to take gold, finishing five points ahead of asere overall.

Speaking after the final, Velista71, real name Filippo Lanfranchi, was full of praise for his tough opponents.

“The competition is very fair and I found myself up against seven strong players,” he said.

“We were so close, from the beginning to the end of the race and I fought to maintain the level of my race.

“When I saw Lucas (SNPJ Luca 56124), this young Italian guy, ahead of me, I calculated my ranking and I was happy to let him stay in front – he was very strong and I didn’t think I could pass him anyway!

“I do a lot of training at home in the evenings as I work during the day, and my family are very supportive – they let me train and race.

“To win the eSailing World Championship is fantastic as I’m a sailor in real life too.

“I started to race in the Optimist when I was eight years old, moving into the Laser and then the Star, but I was always in the middle of the national rankings; I never got much higher.

“Now I’m the World Champion of sailing – but in eSailing! For me, it’s incredible.”

Announcements on the format and makeup of the 2020 eSailing World Championship will be made in the coming months.