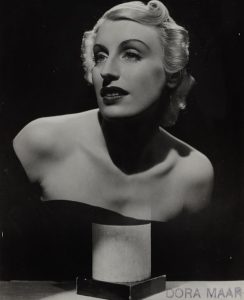 Her eager depictions of the ethos of the modern woman of the 1930s saw models – clothed and nude – floating beyond the cultural norms of the times. Swinging in her photography from sensuality to stark reality to surrealism, she created what are described in a stimulating new exhibition as “wildly inventive images.”

Dora Maar (1907–97) whose provocative photographs and photomontages became crown jewels of surrealism is given by Tate Modern a first UK retrospective, painting an intimate picture of her remarkable, courageous life.

The photography phase had the most impact on society at large and is the reason she is most remembered (as well as for her being one of the lovers taken by Pablo Picasso). That said, the exhibition pays tribute to the rich variety of her output, giving deserved space to many of her paintings from the late 1930s onwards. 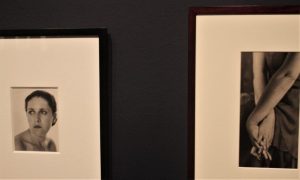 Her staging of new realities in artistic and commercial photography, montage and collage were suffused with the energy she poured into everything she undertook, but were never over-engineered, to judge by everything in the new show.

Featuring over 200 works from a career of more than six decades, the London exhibition shows how her eye for the unusual leapt from commercial commissions to social documentary to paintings – a swathe of which have, until now, remained little known. 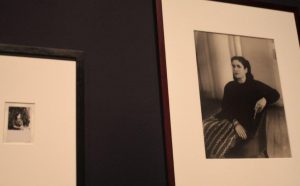 Born Henriette Théodora Markovitch, she shortened her name to Dora Maar after growing up in Argentina and Paris. She studied decorative arts and painting before applying herself to photography at a time when women were seizing new opportunities to work for advertising and the pictorial press. After a photo-wall of Dora as a young woman of the new era, the exhibition delights with mesmerising examples of commissioned works.

The first five rooms that show work produced in the 1930s might turn out to be those that leave the most haunting impression on the visitor. Around 1931, Maar set up a studio with the film set designer Pierre Kéfer specialising in portraiture, fashion photography and advertising.

Their enterprise capitalised on the popularity of illustrated magazines – one side of the inter-war tension between the liberation of well-off strata of women backed by the fantasy manufactured in many publications, and the dismal drudgery endured by many millions.

Dora and her colleague proved adept at the marketing of make-up and beauty through alluring and intriguing images. 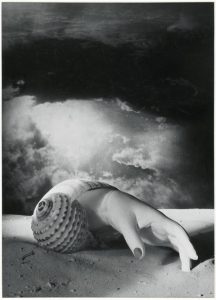 On show is an untitled photomontage labelled (Les années vous guettent) from around 1935. This is believed to be an advertising poster for anti-ageing face cream and was made by combining two negatives so that a face (of her close friend Nusch Éluard) was overlaid by a spider’s web.

Striking nude studies – in both graphic and photographic modes – such as those of acclaimed model Assia Granatouroff reveal how women photographers like Maar were breaking the boundaries and daring to present erotica.

Assia was a stunning beauty and a muse for other leading photographers including Germaine Krull, Emmanuel Sougez and Roger Schall. Dora Maar considered Sougez (1889-1972) her mentor. Assia was born in Ukraine in 1911 and her family fled revolutionary Russia to settle in France. After studying textile design, she began posing as a model in 1930. 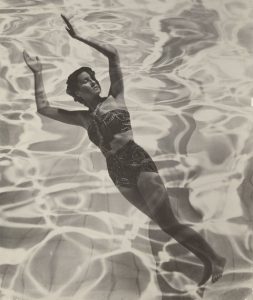 Dora felt confident to pursue this course from 1933 onwards for at least five years, and her sultry images appeared in the magazine Séduction and elsewhere, making full use of her skills in lighting and contrast.

A different side of her passionate engagement with society emerged in the 1930s, as governments fell rapidly and across Europe the far right surged. She committed herself to left wing groups led by artists and intellectuals, including the poet and author of the Surrealist Manifesto André Breton, screenwriter Louis Chavance and the philosopher and prolific author Georges Bataille.

She left the comfort of the studio to take her camera into the streets, adding to the lasting documentary records that her contemporaries were making of mass rallies, marches and violence. She wielded a Rolleiflex camera, which enabled her easily to capture fast-moving incidents and individuals who merited attention.

She struck out on her own: without any magazine or newspaper commission, she travelled to Barcelona in 1933 to take pictures of the handicapped, the homeless, mothers with babes in arms, and the playing of poor children. 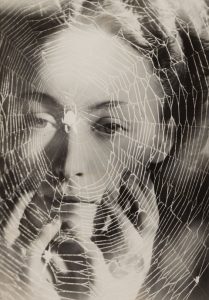 The following year she was in London. Photos in London streets were taken from dramatic angles to give a peculiar view of the city – one such is of a worker inspecting probably a drain under the pavement, his head and right arm disappeared under pavement level. On the outskirts of Paris, she roamed a district known as La Zone where 40,000 people struggled to survive extreme hardship.

Tate gathers collages and publications by Dora’s circle of friends and co-thinkers, including Paul Éluard and his wife Nusch, André Breton, Georges Hugnet and Jacqueline Lamba to set her work in context. She was close to Nusch and deeply moved when she died from an aneurism in November 1946.

Through Paul Éluard, Dora in the winter of 1935–6 met Pablo Picasso on the set of the film Le Crime de Monsieur Lange. She was 28 years old, and he had just turned 54 and was emerging from “the worst time of my life.” He was fascinated by Dora’s crazy game of stabbing a café table with a penknife between her fingers, demonstrating her self-assurance. Their relationship lasting eight years had a profound effect on both their careers. 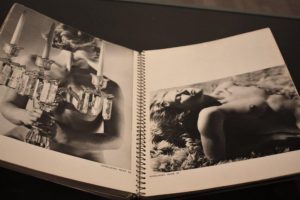 Picasso looked down on photography, although she taught him a complex method combining photography and printmaking known as the cliché verre technique. In addition to her tutorials on photography, she documented the progress of Picasso’s great canvas Guernica and is credited with heightening his political awareness.

Tate Modern sets out to provide a framework for Dora’s insightful recording of work on Guernica which was completed for the Spanish Pavilion at the Paris International Exhibition, which opened in June 1937. The large oil painting in grey, black and white was approvingly described by Dora as “like an immense photograph, absolutely modern” and is a response to the Nazi aerial bombing of the marketplace in the Basque town Guernica at noon on April 26, 1937.

Dora is said to have painted a few grey strokes on the fatally wounded horse shown in Guernica, and the electric lamp Picasso added may have been inspired by one of Dora’s studio lights. Dora said that he borrowed the light-bulb motif from a painting she made earlier that year, possibly The Conversation, a rarely seen, privately owned work which is on display here. The Conversation shows Dora with her back to the viewer, at a small table, in the shadow of his previous lover with whom he remained close, Marie-Thérèse Walter. 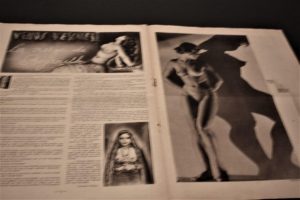 From the magazine Séduction, No. 82.

Picasso painted many portraits of Dora, including Weeping Woman from that same momentous year 1937. Dora felt that this was not a portrait of her, but a metaphor for the tragedy of the Spanish people. Picasso encouraged her to return to painting, and her style was to evolve beyond the cubist- portraits she made under his influence.

She continued painting in the Occupation war years, when her father left for Argentina, her mother died, close friends were exiled from France and her relationship with Picasso crumbled. She moved to another studio in Paris and composed landscapes from the banks of the River Seine, and still life in muted tones. 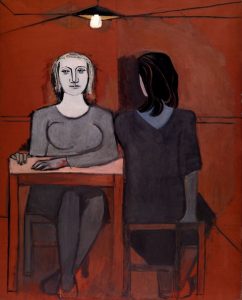 After World War II, Dora divided her time between Paris and a hilltop village in the south of France. She eventually produced abstract paintings in ink, oil and watercolour of the landscape near her home in the Vaucluse department. The exhibition reunites some 20 works from her later years including some photograms (camera-less photographs made by putting objects onto photo-sensitive paper or tracing light across its surface) from the 1980s. It was a return to the inventiveness of the darkroom after four decades.

Achim Borchardt-Hume, Tate Modern director of exhibitions, said that the institution was proud to present the story of “an extraordinary woman and extraordinary artist, documentary and commercial photographer.” The exhibition was part of the attempt to bring to the gallery women artists especially, and artists “who some people perhaps have a slightly clichéd view of who they are.”

Fly me to the Moon: Refined Luxury