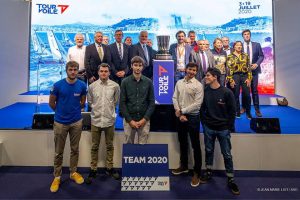 The Tour Voile will again be the major event of next July. While the ingredients that have made it a ringing success over the years will remain part of the magic formula, the 43rd edition will be introducing new features unveiled today at the Nautic Paris Boat Show. After all, the secret to the enduring appeal of the Tour Voile is none other than its flair for evolution and innovation. Seasoned amateurs, rising stars and champions with nothing left to prove will go head to head from 3 to 19 July for 17 days of confrontation without quarter on the most beautiful and testing bodies of water in France.

Meanwhile, on dry land, the partners will be running a wide range of activities on the Tour Voile Base. Fans on the Paddock will get to see the crews prepare for the race from up close before heading to the Spectator Zone to cheer on their favourite teams. The Zone offers a spectacular view of the races, which will be commented live.

In keeping with a tradition going back no fewer than 33 editions, Dunkirk will host the start of the 2020 Tour Voile. The competitors will be thrown in at the deep end, with two days of nautical stadium courses and a coastal raid course along the Flemish dunes. The teams will then set sail for Normandy for the next two Acts. First comes Dieppe in the Seine-Maritime department, which will be hosting the Tour Voile for the 29th time, followed by Barneville-Carteret in Manche. This special Act will mark the grand return of the offshore leg so sorely missed by the crews. The sailors will tackle this leg for the first time on board their Diam 24 od yachts to make their way to Erquy in the Côtes-d’Armor department, which will host Act 4. The Grand-Ouest marathon will come to an end in the Gulf of Morbihan, specifically in Arzon. It will then be time for the crews to head to Serre-Ponçon in the southern Alps for an unprecedented Act that promises a thrilling showdown —the Tour Voile’s first ever on an inland body of water. Finally, Nice will host the seventh and final act for the seventh year in a row. Just a few weeks after kicking off the Tour de France bicycle race, the Baie des Anges will hail the champions of the Tour Voile at the end of a 100% nautical stadium course Act. The Super Final, always as decisive as it was in 2019, when the duel between Beijaflore and Cheminées Poujoulat went down to the wire, will be held on Sunday 19 July.